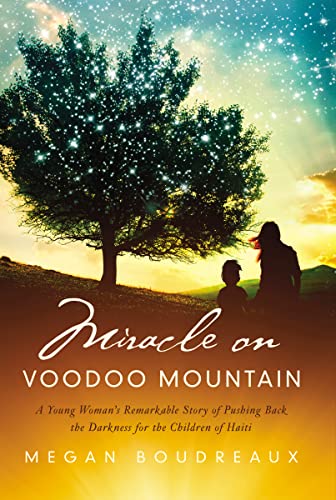 Miracle on Voodoo Mountain: A Young Woman's Remarkable Story of Pushing Back the Darkness for the Children of Haiti
Megan Boudreaux
Thomas Nelson, 2015
204 pp., 22.99

This is a guest column by Amy Peterson, an ESL instructor at Taylor University. Her blog, Making All Things New, is at amypeterson.net.

It began with a dream. Not a Martin Luther King, Jr., kind of dream, but a literal one: Megan Boudreaux was dreaming about a tree. She'd wake, heart pounding, and wonder why a tree she'd seen once on a business trip to Haiti kept appearing to her as she slept. Eventually, she took it as a sign that she was called to return. Twenty-four years old, Boudreaux quit her marketing job in Louisiana, sold most of her possessions, and used her savings to move—alone, and without any clear agenda—to Gressier, a suburb of Port au Prince, Haiti. Miracle on Voodoo Mountain is the tale of the next three years.

With well-paced (if mostly unmemorable) prose, Boudreaux skims over her Catholic childhood and a re-dedication to faith during her studies at Tulane. On her third day in Haiti, she takes a walk up Bellevue Mountain. There she sees the tree from her dreams—and under it, a child.

That child, Michaelle, will become her first adopted child as well as her introduction to the world of restaveks. The Creole word restavek roughly means "stay with" and refers to the 200,000 children in Haiti who have been sent from their poor rural families to live with urban relatives as household help. Instead of receiving care and education, restaveks are often malnourished and abused, and increasingly, recruited by paid traffickers. Boudreaux becomes determined to help local restaveks attend school, and to help families find ways to change the restavek culture.[1]

While working to establish Respire Haiti, her nonprofit organization, Boudreaux also makes regular visits to the Son of God Orphanage. In the most thrilling story in the book, Boudreaux realizes that the orphanage, run by "Pastor Joe," is a scam to collect money from multiple American churches without ever providing food, clothing, or basic medical care for the children who are there. Working as part of a sting operation to imprison Pastor Joe, Boudreaux finds that corruption has infiltrated the highest levels of local government.

It's the most interesting part of the book because it's complex and nuanced, without a clear (and happy) resolution. In this it differs sharply from the bulk of the narrative. While Boudreaux criticizes the way that naive good intentions plus an influx of American cash went horribly wrong in the Son of God Orphanage, the rest of the book is an example of how naive good intentions plus an influx of American cash can go wonderfully right: Boudreaux herself goes to Haiti with little to no knowledge of the culture and language and no clear plan for what she hopes to accomplish there. Yet, through the leading of the Spirit, she is able to purchase land that had for many years been a major site of voodoo worship and found a school, a halfway house for teen moms, and a medical clinic, as well as starting sports education and free meal programs.

What's not to like about this? The problem is that Boudreaux, with the best of intentions, immediately began addressing needs she saw without understanding the ramifications of her actions. In other words, she began her work in Haiti doing the very thing she warns her readers against. (Some Christians, she notes, come for a week and give money to help the children they meet, innocently funding child trafficking. Others unwittingly support frauds like Pastor Joe.) Only later does she begin to realize how complicated her task will be.

Reading Boudreaux's stories of rescuing children from slavery, encountering machete-wielding voodoo practitioners, and witnessing healings, I'm transported back to the missionary biographies that I read as a child: Amy Carmichael saving girls from temple prostitution, Gladys Aylward quelling prison riots, and Elizabeth Elliott returning to the people who killed her husband. Miracle on Voodoo Mountain differs in interesting ways from the conventions of the missionary narrative I grew up with, though: the narrator is not driven by evangelistic goals so much as by a mystical call; we never see her preaching or teaching; and her writing contains very little Scripture or exhortation, only stories of dramatic personal experiences. In fact, the words "missionary" and "evangelism" never appear in the book, and only one story tells of a conversion. This difference is perhaps a distinctive of the millennial missionary narrative, prioritizing issues of social justice above conversions. Despite these departures from convention, in many ways the book falls squarely into a genre that's been popular in America since the 1750s. Perhaps it's time to question the value of the genre.

The missionary narrative as we know it today came into its own thanks to Jonathan Edwards. After the death of David Brainerd, who spent three years attempting to evangelize Native American tribes in the 1740s, Edwards edited and published Brainerd's diaries, transforming him into a saintly folk hero. The romanticized Life of David Brainerd was the most popular of all of Edwards' works, and it inspired the first generation of evangelical missionaries to come out of America as well as a growing body of public missionary memoirs.[2] It served as the template for a genre that continues to create bestsellers like Through Gates of Splendor and Kisses from Katie.

We might say that Edwards created the American "missionary myth." Myths aren't necessarily stories that are untrue; they are stories that are iconic and powerful, drawn from a society's history and, through repetition, coming to symbolize its deepest convictions about morality and the nature of reality. Our evangelical missionary myth grew up alongside the American myth of the frontier hero: in each, a rugged individualist is off to conquer a frontier for the good of a community.

In the missionary myth, an individual receives a special calling from God. She defies her family's expectations and cultural norms to cross borders, and perseveres against physical, spiritual, and emotional hardships to carry the gospel to a new frontier. Whatever trials she faces pale in comparison to the adventures she has and the wonders she sees. Through her cross-cultural work, she can reach the highest level of spirituality. Her everyday activities are imbued with more purpose and meaning than ours are, back home; she fairly glows.

It was this sort of missionary myth that sent me (and lots of my Passion and Urbana conference friends) overseas after college, certain that to be one of the super-spiritual, radical, glowing Christians I should be serving God in a foreign country.

While I still enjoy a good missionary story, my own introduction to cultural complexity and failure overseas have taught me to question the narrative. I don't question Boudreaux's experiences; what I question is the value for the church in telling these kinds of stories in these kinds of ways. Is this how we want the church to understand mission, as a series of thrilling experiences rivaled only by the tales told by Tom Clancy? Is this how we want the church to imagine missionaries, as idealized characters surrounded by people who are either good or evil? Is this how we want developing countries portrayed, as places where the darkness is somehow darker than it is here?

Thrilling stories help sell books. More people are likely to buy a book about an American prom queen who battles demonic forces in a foreign land than one about Pastor and Madame Charles, the Haitian couple who prayed under that tamarind tree every Sunday for twelve years, asking God to send someone to build a school there. And yet a life of faith and mission is more likely to look like that: like private, persistent prayers unnoticed by the wider world. Less like a grand, heroic gesture, and more like daily faithfulness in a quiet life.

Some scholars have argued that idealized missionary narratives serve an ecclesiastical function similar to icons: they inspire us even as we know they do not perfectly image physical reality.[3] But idealized stories fail on several levels. They fail to prepare young readers for the realities of a complex world populated by people who are more nuanced than stock characters. They fail to equip adult readers to understand the sacredness of all kinds of vocations. And they fail to assist scholars and missiologists in strengthening our understandings of the most effective ways to do cross-cultural work.

Doubtless Miracle on Voodoo Mountain and books like it have inspirational and devotional value. My hope for this book in particular is that it will open American eyes to the damage done by investing money without investing in relationships. Still, I dream of a day when the books that come to prominence will tell more complex, nuanced stories of God at work in the world. Stories where the heroes aren't always white. Where the people aren't either good or evil, but human. Where kingdom-building is as fraught with failure as it is marked by success. Where God is found in small moments and humble disciplines as much as in dramatic encounters and miraculous healings. Ultimately, Megan Boudreaux understands that small changes are miracles in their own right—as when she describes how her adopted daughters have transformed from "biting, scratching, and yelling to kissing, hugging, and whispering sweet prayers." Amen.