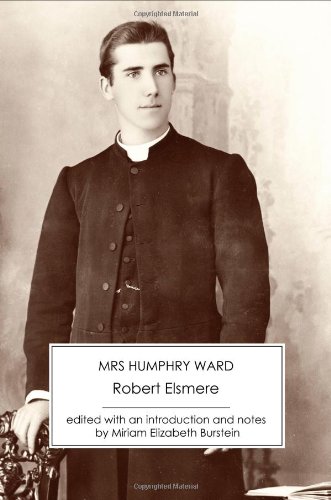 The back cover of this critical edition of Mrs. Humphry Ward's Robert Elsmere (1888) makes the staggering suggestion that that it "was probably the biggest selling novel of the nineteenth century." Alas, the introduction by Miriam Elizabeth Burstein does not discuss the evidence for why a novel you have probably never heard of might have beat out Dickens, Sir Walter Scott, and the rest of the gang. One of the appendices, however, reprints a preface Ward wrote for an Edwardian edition in which the author claimed that the copies already in circulation were close to a million. At any rate, it is beyond dispute that it was a Victorian blockbuster. It was such a sensation that even the prime minister, W. E. Gladstone, decided to review it.

So why has it dropped out of sight? One banal, partial answer is its length. Victorian novels are notoriously bulky, and this one is almost twice the size of their already formidable average. The original version was spread over three volumes and this edition invites the reader to persevere through 600 pages.

Worse, it is a didactic novel crammed with theological debate. Robert Elsmere is a bright young Oxford graduate who is ordained and makes a promising start in a rural parish but then experiences a crisis of faith and leaves the Church of England. Ultimately—spoiler alert!—he establishes in a poor London neighborhood a Theistic congregation devoted to following the example of a purely human, demythologized Jesus. Let's just say that most modern readers are not sufficiently interested in the precise intellectual route Elsmere takes from orthodoxy to modernist Unitarianism to want to track its every bend across several hundred pages.

Being a novel, however, it is also a romance. Robert falls for Catherine, a woman who holds rigidly to the Puritan verities of a past generation (one character exclaims, "She is the Thirty-nine Articles in the flesh!"), and the principal drama revolves around whether their religious differences will thwart their love.

Alas, not even this human interest can readily entice in the 21st century. Ward herself already thought it so old-fashioned as to be almost incomprehensible to her readers that a woman might let a little thing like heresy give her pause. Late Victorians, Ward assumed, had already sided decisively with "the sacredness of passion and its claim." Certainly people today are supposed to be impatient with Catherine's concerns: "I thought of what it would be like to have to hide my prayers from you—my faith in Christ—my hope of heaven. I thought of bringing up the child—how all that was vital to me would be as superstition to you."

The contemporary way of seeing things is actually a major difficulty for plotting romantic comedies. The genre requires some objection keeping the pair apart, but people today simply cannot imagine any claim so important that it might stand in the way of their personal fulfillment. A classic romantic comedy such as Sabrina (1954) could take seriously the possibility that something as abstract as class distinctions might mean that Humphrey Bogart would have to get along without Audrey Hepburn. By the 1990s, however, the sacred right to share a bed with whomever you wish as soon as the desire arises was so taken for granted that Sleepless in Seattle (1993) was driven in despair to creating a plot in which the obstacle was that the two principal characters had never met. The Wikipedia list of romantic comedies from our current decade is replete with the-way-we-live-now titles such as Friends with Benefits and No Strings Attached.

Yet Gladstone, who loathed the book's message, nevertheless conceded that it was "not dull," and Burstein is right to defend it as "absorbing." Many of the characters are drawn with wicked precision and mouth mischievous lines. There is the skeptical Oxford don, Edward Langham, whose scholarly temperament has made him constitutionally incapable of pronouncing decisively about anything:

If you could have got at his inmost mind, it was affirmed, the persons most obnoxious there would have been found to be the scout, who intrusively asked him every morning what he would have for breakfast … . [T]he wags of the college averred that when asked if it rained … it was pain and grief to him to have to affirm positively, without qualifications, that so it was.

A complacent aristocrat is summed up thus: "It is a great thing to be persuaded that at bottom you have a good heart. Lady Charlotte was so persuaded, and allowed herself many things in consequence." And an Oscar Wilde-like poet, complete with a velvet coat: "His extravagance, however, was of the most conventional type. Only his vanity had a touch of the sublime."

With the novelist Mrs. Darcy, Ward gamely turns the satire on her own breed. Prince Albert had personally asked to borrow a copy of Mrs. Darcy's novel. She reverently preserved the turned-down page which indicated where he had given up on finishing it. Robert Elsmere, of course, follows a Victorian trend of naming novels after their lead (usually male) character. Dickens did so half a dozen times. Darcy announces that she has given her current effort the gripping title, Mr. Jones.

Still, the religious discussions date badly. While ostensibly being bravely rational, Elsmere actually ends up with a deeply assailable and contradictory set of beliefs that only seemed plausible for a cohort of readers at the time because they all chimed in with the zeitgeist.

Working-class men did not attend church regularly because it was not how they wanted to spend their time—a disinclination toward such organizational commitments that is still a driving force behind the so-called secularization of Britain today. Ward and Elsmere irrationally imagine that all that is keeping laborers away is that they cannot find a rational form of religion. (In the real, late Victorian London, it was not anti-supernatural Theism that was reaching the poor but rather the old-time religion of the Salvation Army. Robert Elsmere is a fairytale in which the thoughts of the urbane Unitarian thinker James Martineau mysteriously generate the results of William Booth.) Things are rigged so badly towards the end that Ward pretends that orthodoxy is docetic and therefore only a Unitarian presentation of Christ's passion could move an audience: "there was no comforting sense of jugglery by which the suffering was not real after all."

The concluding fantasy entails working-class roughs not only becoming highly committed congregational members but even leading daily family devotions. My point is that the novel resonates less today because what Ward never doubted we find highly improbable: namely, that like sleeping and eating, urban workers feel a natural need for corporate worship and church membership.

Ward makes much of facing honestly the critiques of doctrines she wishes to see abandoned, but everything she wants to keep is given a complete pass from scrutiny. Thus, Elsmere's great crisis leads to the conclusion "miracles do not happen!" His new, rational self still believes "in God the Father Almighty" but merely confesses this dogmatically without ever explaining the warrant for such a belief (let alone why the "Almighty" is unable or unwilling to do miracles). The Victorians liked the idea of the fatherhood of God, so it somehow seemed self-evident.

Even more problematic are the reasons for his doubts. They emerge from his study of the records of late antiquity and the medieval period, which lead him to conclude that people in the past were irrational, "non-sane." This means that all human testimony before the Renaissance cannot be trusted. Out go the biblical miracles, the resurrection of Christ, and so on. The whole view is based on a very smug, ethnocentric assumption of superiority that an introductory course in anthropology would thoroughly dissolve.

Oddly, having concluded that ancient testimony is throroughly unreliable, Elsmere nevertheless insists that members of his New Brotherhood are called to obey the words of Jesus. This suggests that his inability to believe in miracles must be grounded in some other reason than the one he has given.

With this critical edition, Burstein has done heroic labor. The text itself is not flawless, however. I noticed a handful of transcription errors, my favorite of which is the young man who agrees—in what is almost a Wildean witticism—to see a vivacious beauty "safely off the promises" (alas, my Victorian edition of the novel has "premises").

Creating annotations is inevitably a thankless, impossible task. Readers want the things that they don't understand but wish to have explained, but as the preexisting knowledge of each reader is unique and varies wildly, what is a poor editor to do? For example, Burstein is valiantly committed to elucidating every real person named in the text. Thus John Henry Newman is identified as "a leader of the Oxford Movement," but I have a hard time imagining a reader who knows what the Oxford Movement was, but not who Newman is. This is not a criticism of Burstein but rather a prayer of gratitude that I have never agreed to attempt a critical edition.

I was, of course, most pleased with those notes that told me what I did not know. For example, a room decorated with "Liberty stuffs" is expounded: "textiles sold by London department store Liberty and Co., a store whose marketing appeal 'emphasized the aesthetic over the functional qualities of material goods.' " I also enjoyed generating imaginary notes of my own. The fictitious work of coarse atheism, Comic Life of Christ, for example, is clearly an allusion to the Comic Bible Sketches by G. W. Foote, a leading light of the National Secular Society.

One senses toward the end of the novel that maybe even Ward herself doubted the efficacy of her modernized faith. Twice within three pages she enthuses about the "magic" of rational Christianity, but replacing miracles with magic hardly seems to accord with her teleology of Enlightenment progress—it suggests she feels a loss that needs to be covered over. In the end, Robert Elsmere is canonized in the hearts of all right-thinking people: "And we go prating that the age of saints is over." The version of that saying I've always heard is dismissive of those who think the age of miracles is past.

Timothy Larsen is McManis Professor of Christian Thought, Wheaton College. His sixth monograph, The Slain God: Anthropologists and the Christian Faith, is just out from Oxford University Press.