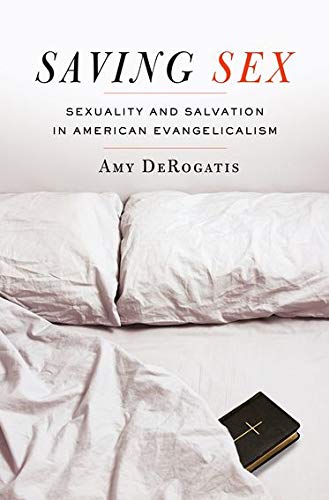 A curiously selective look at evangelicals and sex.

I am a straight, white, evangelical mother of four children, whom I homeschool. If that's all you knew about me, you might think I was a card-carrying member of the Quiverfull movement—assuming you'd actually heard of the Quiverfull movement, which I hadn't until I read Amy DeRogatis' Saving Sex: Sexuality and Salvation in Evangelical America. DeRogatis also introduced me to Titus 2 women, purity balls, sexually transmitted demons, and God's healing sperm.

Let's take those in order.

Quiverfull is not simply a delightful Trollopian pun. It's a bona fide movement which, according to DeRogatis, believes in populating the kingdom of God by having lots of kids and bringing up children in the discipline and instruction of the Lord. Birth control is bad, large families are good, homeschooling is encouraged if not required, and marriage is ministry. Wives and husbands minister to each other, wives by submitting to their husbands ("especially sexually") and husbands by, one assumes, loving their wives as Christ loved the church, though DeRogatis doesn't actually say as much. In fact, she says very little about the husband's role, but perhaps the Quiverfull folks themselves say very little about the husband's role beyond that he is the "head" of the family.

Titus 2 women are similar to Quiverfull wives in that they submit to their husbands, stay home to raise the kids, and believe that marriage is ministry. They emphasize the sacrificial nature of marriage, the giving up of self for husband and family, as a way—or even the way—to serve God. And they encourage older Christian women to mentor younger ones and help them to understand and live out "biblical womanhood."

Purity balls exist somewhere else in the evangelical world. They're a particular expression (in my view, an extreme one) of the purity movement. At purity balls, dads and daughters promise to love and honor one another, ...