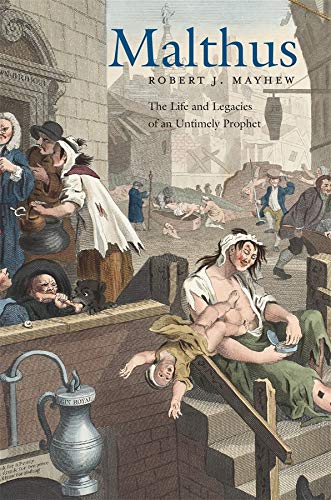 If you know anything about Thomas Robert Malthus, it's likely that you know only one thing. A mention of his name will lead immediately to his worrying contention that population will grow more quickly than food production, and then chances are that no one will have anything else to say. Few have read him; few would be able to come up with another of Malthus' ideas.

Robert Mayhew helpfully dusts off Malthus and recounts his influence up to the present day, explaining why, with his one big idea, he became such an influential figure in European and North American intellectual history. Wordsworth, Marx, Darwin, Ruskin, Keynes, Churchill, Hitler, and Ehrlich all had Malthus in the footnotes to their ideas.

Thomas Robert Malthus was born into a clerical family in Surrey in 1766. Neither rich nor poor, the family was of the middling sort that will be familiar to any who have read the novels of his contemporary, Jane Austen. His father, Daniel, read widely, admired Jean-Jacques Rousseau, and ensured that Robert was well prepared when he matriculated at Jesus College, Cambridge, in 1784. There, he adopted a way of thinking about the world that brought together two different strengths of the university: the pure mathematics associated with Sir Isaac Newton and the moral philosophy of William Paley. He became interested in what Condorcet had recently termed "social science": the application of mathematics for the study and therefore service of society.

Malthus was ordained at Cambridge and took a parish in Surrey in 1789. Surrey was very different from the land of leafy suburbs that it is today. Blast furnaces dotted the countryside. Awful roads left villages isolated. Infant mortality was almost twice the national average. This was part of the context for the development of Malthus' theory of population. Another part was, predictably, the social and political ferment associated with the French Revolution. Malthus published his 1798 Essay on the Principle of Population against a backdrop of high food prices, riots, machine breaking, and radical politics, and the work has often been understood as justification for conservative authorities to grind the lower classes even harder.

The central idea of the Essay is the one that people know. Malthus argued that nature is a limited resource, and that agricultural production will increase steadily perhaps, but only slowly. Humanity, by contrast, could expand much more quickly: even with high infant mortality, one plus one could make four, five, or more. This was a law of nature, an analogue for human society of Newton's work on the physical world. It flatly contradicted most contemporary thinking about population, in which flourishing populations were an expected part of the enlightened future. But despite the bleak picture he painted, Malthus said that it was the optimistic political radicals, in Britain and France, who were ignoring the lower classes: it had only been their ignorance of what life was actually like for the poor that allowed them to propagate such fatuous visions of a rosy future. Worse, ideas like these raised people's hopes and thus fostered revolutions that could never deliver on their promises because the laws of nature showed that nature was stern.

Malthus went on to counsel governments to find ways to contain population growth on the one hand and to encourage greater agricultural efficiency on the other. In the end, he was a providential optimist, believing that God had made the world niggardly in order to spark the ingenuity of a race that otherwise would have remained lazy and savage.

The brickbats came quickly. Mayhew points out that Wordsworth wrote "Lines Written a Few Miles above Tintern Abbey" just 36 days after Malthus completed his Essay, and although Wordsworth had not yet read the Essay his poem encapsulated a very different view of nature; no wonder the Romantics attacked Malthus as violently as they did. Neither Wordsworth nor Coleridge published a word against Malthus, but comments found in their papers show that they were aware that their view of the generosity of nature was quite different from his. According to Coleridge, Malthus was a "contemptible … wretch," his work a "monstrous sophism."

Some critics were more public in their response. Dickens made Scrooge a Malthusian. Carlyle coined the phrase "dismal science" in one of his critiques of Malthus. Marx and Engels both took on Malthus' ideas, arguing that what he had found was not a law of nature but a failing of the capitalist mode of production. The central point made by all the critics from Coleridge to Marx and beyond was that poverty was not caused by the meanness of nature but by the meanness of the social arrangements that humanity had made. Moreover, some critics argued that Britain's emergence as a mineral economy, based on the use and export of coal, had allowed it to escape the trap of Malthus' agricultural economy. Industrialization meant that Britain could now import as much food as it needed for its growing population.

Whether they liked Malthus or not, there can be no doubt that for many Victorians he provided seeds from which their own ideas grew. He helped inspire social scientific investigation by the British government, most obviously in the first census of 1801. Alfred Marshall and others who helped to organize the discipline of economics acknowledged Malthus's importance for the field. Darwin's theory of natural selection emerged in part from his musings on Malthus' comments on preventive checks to population growth. The Malthusian League was an early advocate of birth control.

Malthus' influence continued in the 20th century, when a series of debates centered on economics, population, and natural resources ensured global notoriety for this English clergyman. One prominent example was the ongoing arguments over contraception. For some, he was a hero for advocating population control. But he became a villain to those who became concerned about population decline, especially in Europe after the bloodletting of the Great War. Pronatalists in France and Italy opposed contraception, abortion, and the employment of women. In the United States, concerns that laborers and blacks were reproducing more quickly than educated whites led to a eugenics movement and the compulsory sterilization of tens of thousands by the 1970s. As early as 1908, Anglican bishops in England had worried that "the great English-speaking peoples … would commit … race-suicide, and so fail to fulfill that high destiny to which in the Providence of God they have been manifestly called."

More positively, Malthus was a major influence on John Maynard Keynes. In particular, Malthus' argument that the market can go awry and people can starve when there is not enough demand for their labor was foundational for Keynes' General Theory of Employment, Interest and Money (1936). Keynes developed this point about effective demand to argue that governments should intervene in order to keep demand and therefore employment high. Here it seemed Malthus was on the side of compassion, not the heartless clergyman of lore.

When it came to India, however, Keynes and Malthus had a more sinister relationship. Keynes had worked at the India Office in London, where he seems to have imbibed the idea that famines and other disasters were useful checks on too large a population. Churchill, who also served in India, held a similar view. He had read Malthus in the late 19th century, and this enabled him to see an Indian plague as "the destruction of some of those superfluous millions." This helps explain why Churchill supported the shipment of grain from India to Britain during World War II despite famine conditions on the subcontinent.

Hitler also read Malthus, and it is not hard to draw lines between the Essay and Hitler's vision that territorial expansion and the elimination of lesser peoples would alone secure the future prosperity of the German Volk. Mayhew does so, yet here as elsewhere the book has a slightly unreal quality. Tracing intellectual links is perilous, and while the book under review clearly establishes connections between Malthus and those mentioned here, it cannot provide the sort of detailed exploration of the thought of, say, Carlyle, that would give a satisfying account of his intellectual formation. The focus on the influence of Malthus makes for a fascinating and readable narrative, yet one is left wondering whether this is rather akin to the Freedom Trail in the city where the book was published—a very informative path through some complex and contested terrain yet one that necessarily tells an incomplete story.

Mayhew goes on to trace the connections between Malthus and the environmental movement as it developed in the United States in the 1960s, when Paul Ehrlich and others created a controversy that is still with us by predicting a Malthusian disaster for planet earth. Here, Mayhew is impressively evenhanded as he traverses what has become an ideological battleground over the future of our natural environment. The chapter does, however, highlight another shortcoming of the book under review, namely the lack of voices from outside Western Europe and the United States. What have Africans and Asians had to say about Western fears that their fecundity threatens our collective existence?

Despite these concerns about the incompleteness of the story Mayhew tells, let it be noted that he concludes with a plea for recognizing the complexity of Malthus' thought. Here, what might seem the dullest chapter in the book becomes the most significant. For after summarizing the Essay, Mayhew goes on to explore Malthus' later publications. None are even close to as well known as his first book, but together they reveal a thinker with "the laudable quality of allowing empirical evidence to overcome general theorizations, of desiring to think humanely, practically, and specifically about the nexus of society, economy, and environment." Anyone can grasp Malthus' most famous argument and apply it to some contemporary concern, but history shows that that is a risky business indeed. Much better to do what the best intellectual historians seek to do, and what Mayhew urges at the end of his book: to look to the past not for theories to apply briskly to our own, very different times, but for exemplars of how to think well. Mayhew tries to rescue Malthus' reputation by saying that many of his readers used him without really understanding him. To any who dream of a great idea that will change the world, Thomas Robert Malthus would say: "Careful what you wish for."

Alister Chapman is associate professor of history at Westmont College. He is currently working on immigration and religion in Britain after World War II.