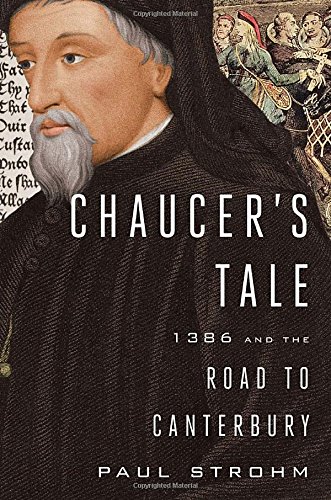 Chaucer Before His Tales

And the year that changed his course.
January/February 2015

Geoffrey Chaucer's life is unusually well-documented by mediaeval standards. More than 400 contemporary records of him survive, in which he appears not as a poet but as a moderately important civil servant with unusually good connections: receiving appointments, collecting his pay, being involved in legal issues, bearing witness in a heraldic trial. Paul Strohm's new book aims, very successfully, to put flesh on these dry bones, and in particular to home in on one year, 1386, which he sees as decisive for Chaucer, for his career, and for the whole later history of English poetry.

In order to do this, Strohm has to fill in considerable background on Chaucer's marriage, his residence, and most of all his job. To take the marriage first: in 1366, when they were both in their early 20s, Chaucer married Philippa de Roët, daughter of a Flemish knight. He was marrying up. Chaucer was the son of a London wine merchant, whose father had managed to place him at court, but he was only rated as "an esquire of lesser degree" while Philippa was an attendant of the queen, like herself from Hainault in Flanders. When the queen died Philippa, revealingly, received six yards of black cloth for mourning garments while Chaucer only got three.

Much more significant, Philippa was the sister of Katharine Swynford. Katharine had married a Lincolnshire knight, who was killed fighting in Aquitaine. While he was away, she had become the mistress of John of Gaunt, King Edward's brother, and probably the richest man in the kingdom. She bore him four children, and thirty years later John scandalized the great ladies of England by marrying his long-term mistress in order to legitimize their children. John and Katharine's families were unusually cohesive. Her children by John loyally supported their half-brother Henry, who would eventually seize the throne of England for himself, while her son by her first husband probably did his step-brother Henry an even greater favor by arranging the murder of the deposed king Richard II while in his custody at Pontefract Castle. It was natural that Katharine should look after the interests of her sister, and her somewhat down-market brother-in-law as well. He was only a squire, but at court the great ones at least knew who he was.

In 1374 they found him a job and an apartment. Strohm describes both in great and welcome detail, so much so that one wonders how Chaucer managed to keep up his early life as a poet at all. The apartment was over one of the gates of London, Aldgate, and though it was rent-free it sounds remarkably unattractive. Its position over a main gate meant that it must have been extremely noisy: carts rumbling through at daybreak, carters assembling to go in and out even earlier. It also must have stunk, for there was an open sewer right outside, Houndsditch, into which the local priory discharged its latrine. Worst of all, for a bookworm like Chaucer, it was very badly lit. Being part of the city's defenses, all it had was arrow-slits, no real windows.

Meanwhile his job was anything but a sinecure. Chaucer was the controller of wool customs. The export of wool was England's major source of income, and the duty paid on it was a major part of the king's income. There was a collector of customs to make sure the tax was paid, and the controller was there to keep a contrarotula or duplicate roll to ensure it was paid honestly. The main mechanism for doing this was a duplicate seal with which both collector and controller had to authorize each bale exported.

But it wasn't as easy as that. The Italian bankers in London would not lend money to the permanently cash-strapped and unreliable English crown without, for instance, insisting on possession of the controller's seal so that they could ensure they were repaid by collecting what was owed them at source. Moreover, the collector of the wool custom was a much bigger fish than poor Chaucer: Nicholas Brembre, Mayor of London. Brembre had his enemies, who would eventually get him hanged, but he stood by the young King Richard at the crisis of the Peasants' Revolt, a service for which he was knighted. Even before that he was careful to cement his position by making personal loans to the king. For Chaucer to object to his accounts would have been a highly dangerous move. Strohm hints furthermore that the occasional "sweetener" for the controller would have been a normal business expense for Brembre. Probably Chaucer's real, unstated job was just to ensure that peculation stayed within traditional bounds.

This takes us to 1386, a year of crisis, and especially for Chaucer. King Richard had alienated the magnates of England, especially his uncle Thomas, by his extravagance and military incompetence. His other uncle, John of Gaunt, Chaucer's (kind of) brother-in-law, was also in deep disfavor following his failed attempt to gain the throne of Spain by right of his second wife, Constanza. Parliament met in a thoroughly bad mood, its main purpose being to ratify grants to the throne, which would not be passed without concessions.

It was in these circumstances that Chaucer became an MP, acting as one of the "knights of the shire," for Kent. But he wasn't a knight, he didn't live in Kent, and, unlike all the other shire-knights, he owned no land—all of which suggests that he was a "placeman," installed by the king to ensure there was at least one voice on his side. One of the things Parliament was likely to be angry about, however, was diversion of the king's taxes to improper ends, so that controllers of custom were very much in the line of fire. Two years later, in the "Merciless Parliament," when the reformers were firmly in control, Brembre would hang for his embezzlements, and one of Chaucer's poetic disciples, Thomas Usk, would suffer an even less merciful death for treason. All Richard's supporters were in a weak position, and Chaucer maybe the weakest of all. And then the chancellor, William de la Pole—many years later Chaucer's granddaughter would marry his grandson—opened proceedings by demanding a quite unheard-of subsidy for the king! He was shouted down, and Richard withdrew in a huff, bringing formal proceedings to an end; it's unlikely poor Chaucer even opened his mouth.

But he was noticed, and he knew he had been. He resigned his controllership, and the city of London passed an act saying there would be no more grants of apartments over city gates. Since the very next day they granted the Aldgate apartment to one Richard Forster, for life, the first act seems to have been aimed at Chaucer personally. His wife was far away in Lincolnshire, he'd lost his job and his dwelling, he may well have felt lucky to get off so lightly. What was he to do?

Retreat to Kent, is Strohm's answer, and write The Canterbury Tales. Chaucer would make a career comeback and hold important posts later on—he was after all the future King Henry's (kind of) uncle, and John of Gaunt and Katharine retained their wealth if not their popularity. But after The Canterbury Tales, Strohm argues, he was a different man, no longer just an overworked civil servant with a poetic hobby but "by most reckonings, the founder of English letters."

Chaucer's apartment was over one of the gates of London, Aldgate, and though it was rent-free it sounds remarkably unattractive.

Strohm tells the story well, and his chapter on "The Wool Men" is especially revealing, but modern academic life creates its own blank spots. Why was Chaucer so useful, being sent abroad more than once, before 1386, on "the king's secret business"? He could speak Italian, a rare accomplishment for Englishmen at that date. Maybe even more important, and probably something he learned along with his Italian, he could use Arabic numerals. He even boasts about it, in his first surviving poem, the elegy for John of Gaunt's first wife, dead of plague in 1369. Strohm perhaps underrates the daring of this poem, for it is in effect a very tactful recommendation to John of Gaunt to accept what's happened and move on. (Who to? The poet's sister-in-law?) But in it Chaucer brings in sudden praise of "the figures ten, / For by those figures may all ken / If they be crafty, reckon and number."

His enthusiasm for "figures" can readily be appreciated if you try to multiply two marks, that is, thirteen shillings and fourpence in old money, by, say, 128 using only Roman numerals (XIIIs IVd times CXXVIII, and the answer is £LXXXV VIs VIIId). An Italian banker could do much more difficult sums than that, but few Englishmen, other than Chaucer, could have checked his reckoning. Note also that in the quotation just above, when Chaucer wrote "ken," rhyming it with "ten," he meant "kin." "Ken" is the Kentish pronunciation, which Chaucer soon dropped for standard London English, the dialect the bureaucrats were developing. So Kent may not have been quite so alien to him as Strohm suggests; and he did have a couple of aces up his sleeve in terms of rare technical knowledge, which explains why later administrations brought him back.

Strohm's is a brilliant book, full of lively detail, and combining personal and poetic life with civic and national politics in a way no-one else has managed. But as always, there is more to say about Chaucer. One feels he is wasted on the modern MLA. He needs his own Hilary Mantel.

Tom Shippey is the author of J. R. R. Tolkien: Author of the Century (Mariner Books).