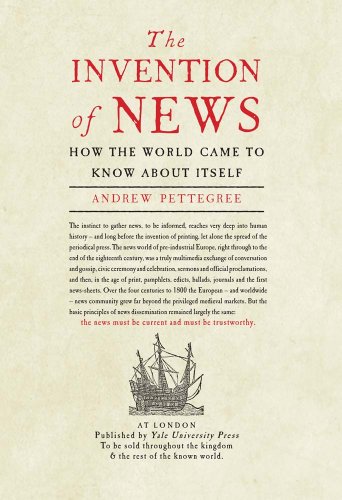 The Invention of News: How the World Came to Know About Itself
Andrew Pettegree
Yale University Press, 2014
456 pp., 35.00

Putting the Newspaper in Its Place

"What news, my lord?" This is Horatio's first question to the prince of Denmark after Hamlet has seen his father's ghost. As events unfold, much of the play—the schemes, intrigue, and bloody conclusion—hinges upon the nature of news, whether from the king's ghost, Ophelia's love letters, or the spies Rosencrantz and Guildenstern. The play even ends with a news-oriented role reversal, as Horatio transitions from news consumer (as the vigilant spectator throughout the play) to the tragedy's surviving reporter.

News, as Hamlet demonstrates, comes in a variety of forms. Each has its own virtues and limitations, but all are intended to satiate what Andrew Pettegree calls the human "hunger for information." In his excellent book The Invention of News: How the World Came to Know About Itself, Pettegree unpacks how this hunger developed into a marketable commodity in early modern Europe and North America.

As the director of the Universal Short Title Catalogue, Pettegree is ideally suited for such a history. The Invention of News arcs across three hundred years of European history, detailing the importance of news-telling from the Reformation and the Battle of Lepanto to the Thirty Years' War and the French Revolution. Guiding the reader through this large swathe of history, Pettegree describes both the great leaps forward (like Emperor Maximilian I's use of a postal service) and the abject failures in the consumption of news.

Many scholars, most importantly Jürgen Habermas, identify the 18th century as a watershed in the birth of an informed public sphere, which was marked by the growing popularity of newspapers. However, The Invention of News tells a more elaborate story. The book argues that "news first became a commercial commodity … not in Defoe's London, or even in the invention of the newspaper, but much earlier: in the eighty years between 1450 and 1530." Long before and long after the newspaper's arrival, there was a multi-media culture of news that served people across the social spectrum.

Beginning with medieval forerunners like the networks of ecclesiastical messengers that connected Europe's monasteries, Pettegree uses the first third of the book to recount the various ways people exchanged information before the newspaper. This he does, at least in part, to drive home the point that, "Put in context, the age of the newspaper seems comparatively fleeting." Rather than being the apex of news, the newspaper represents only one period in a much larger narrative of Western media. In the 15th and 16th centuries, the most essential media service was the epistolary newsletter, like the Italian avvisi: weekly communiqués written by well-informed men such as the Florentine poet and historian Benedetto Dei. These "handwritten briefings" provided "succinct, wide-ranging and remarkably well informed" details on the most current events, and they were sought after by the political and economic leaders of the day. Neither the printing press nor the newspaper dented their popularity. In fact, thanks to their accuracy, regularity, secrecy, and honesty, such newsletters continued to be in high demand among Europe's élite well into the 18th century.

Although people of lesser means could not pay the fee for a manuscript newsletter, they did not lack for news. The printing press created cheaper options such as the pamphlet and the broadside ballad. These more popular (and ephemeral) forms of news first boomed with the Lutheran Reformation in the 1520s. Within the first decade of the Reformation, millions of short (often one-page) ballads or slightly longer tracts—usually dripping with polemic—poured from the presses in what Pettegree calls, "the first major media event."

Along with religious turmoil, pamphlets and broadsides covered a wide array of topics from natural disasters and gruesome crimes to commonplace things like "irregularities in the poultry trade." Oftentimes, the news from cheap print was transferred into the news outlets of the marketplaces and taverns, which were "humble" but "important hubs of communication." Finally, one of the often overlooked media outlets was the early modern postal system. In 1600, news could be passed from Brussels to as far away as Vienna and south to Rome over the ever-expanding network of imperial postmasters.

By 1605, when Johann Carolus of Strasbourg established the first newspaper, Europe was well equipped with a variety of media outlets, each with its own voice, audience, and style. This is partly why "for at least a hundred years, newspapers struggled to find a place in what remained a multi-media business." Beginning a newspaper proved a popular endeavor for many entrepreneurs, but many of these startups had a very short life. The reasons for these failures included the typical content of the serial newspaper, which rarely strayed into local and domestic issues. For example, London's newspapers hardly mentioned the investment craze of the South Seas Trading bubble in the 1710s. Also, newspapers maintained a "clinical and distant" style, which lacked the appeal of the dramatizations found in pamphlets and ballads. Finally, "many regarded newspapers as a fad," because they presented the news in such a segmented fashion. A single newspaper rarely offered an entire story, particularly if the event was continuing to unfold. Reading a single copy of a single paper was oftentimes "like coming into a room in the middle of a conversation."

Newspapers found their strongest footing in periods of social and political unrest, when the events of the day were a pressing concern to people's lives. Pettegree explains that when "timeliness became critical," newspapers could become "a catalyst for action." The Fronde, the English Civil War, the Glorious Revolution, and the French Revolution—all of these periods record spikes in news production and consumption. It was in the years following the Glorious Revolution and during the War of Spanish Succession—the period between 1704 and 1712—that London newspaper production jumped from 44,000 copies per week to 70,000 copies.

Even so, Pettegree points out, the increase in newspapers did not translate into media dominance, at least not yet and not universally across Europe. While English papers expanded quickly in the 18th century, the Paris Gazette (France's government-sponsored paper) produced only 9,000 copies per week in 1700. This did not change very much until the build-up to the French Revolution, when "the interested reader could choose between as many as one hundred serial publications." In places like Spain and Italy, the ascendancy of newspapers came even later, arriving well into the 19th century. A final point that Pettegree makes is that even when educated and influential readers, like the colonialist Samuel Sewall, read newspapers, they continued to rely upon newsletters, trusted confidants, and private letters as their resources for "the best news."

Equally important to this book are Pettegree's observations about the history of news and the questions that they raise concerning the current age of information. For example, if, as Pettegree argues, "news is fresh to anyone who hears or reads it for the first time," then how important is expediency and immediacy to the reader? Furthermore, The Invention of News raises the question of what makes for trustworthy news. While modern audiences trust print and digital media, in "the early medieval tradition … word of mouth was more to be trusted than a written report." Finally, why do most people watch or read the news? Do they consume news because it is important to their lives or because it is "an accoutrement of a polite life"?

Pettegree does not seem too interested in uncovering answers to such questions. This is unfortunate for readers who are expecting a more opinionated study, but it is not unwarranted. By keeping these topics at arms' length, Pettegree avoids any sidetracks that would distract from plotting a clear, historical trajectory of news. This he does very well.

The Invention of News delivers a rich and compelling narrative, which picks away at several common presumptions about the history of news. While he gives leading newspapermen like John Wilkes their due, Pettegree complicates our understanding of the newspaper as an agent of "empowerment and emancipation." The Invention of News veers away from the sort of Whiggish triumphalism that would set up the newspaper as the pinnacle of democratic expression. This is particularly germane in our own day, as the newspaper continues to decline in popularity and other media compete for its place. As Pettegree explains, the newspaper—a latecomer and late-bloomer in the story of news—has always been one among many news outlets in the culture of Western media.

David J. Davis is director of the Master of Liberal Arts and assistant professor in history at Houston Baptist University.