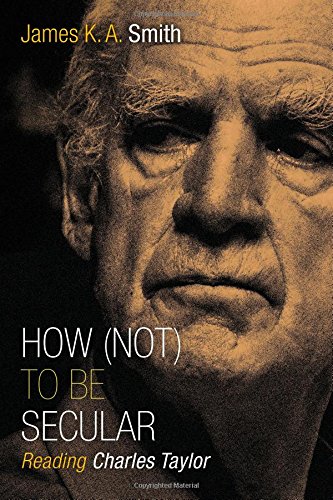 Let's be honest: Charles Taylor's A Secular Age is one of those intimidating tomes you keep hearing about; maybe (probably) you even talk about it yourself, but you haven't read it. There it ponderously occupies your bookshelf, or your Amazon wish basket, its spine uncracked, its pages crisp, unread. Its very reality diminishes you: Why haven't you read it yet? And let's be more honest: you're not going to.

Which brings us to a great piece of news: James K. A. Smith read it for you, and he's written an altogether readable, charming, and short—I'll repeat that last—short introduction to Taylor's behemoth. It is also comparatively cheap.

With introductions to introductions (e.g., this review), there's always the danger of a "game of telephone" gone bad, which is one reason Smith himself exhorts us to read his introduction paired with A Secular Age, as a guide to—not replacement for—Taylor's work. Smith's How (Not) to Be Secular is, unapologetically, a book about a book, but the book in question merits such attention. Taylor is one of Canada's grandest public intellectuals, and A Secular Age is a conversation-defining account of modernity, religion, and secularity (however defined). But (see above) it is so long, so narratively dense, that while most everyone is aware of it, very few people outside rarefied academic circles have actually read it. And this is a genuine problem, because Taylor's arguments are urgently needed—not least in Canada—at exactly this moment.

The most important contribution that Taylor makes is to shift the terms of the so-called debate about religion and secularity. I say "so-called" because Taylor sets out to undress the fiction of religion versus secularism, or belief versus reason, as though these were two discrete, transcultural, transhistorical things. Here's how Taylor phrases it himself: "Why was it virtually ...