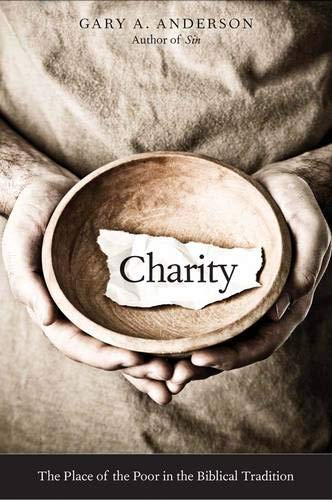 “This is true religion.”

In his fine study of Sin: A History (Yale, 2010), Notre Dame professor of theology Gary Anderson rendered an understanding of his subject richly textured by references to the Hebrew Bible, New Testament, intertestamental literature, early rabbinical writings, and patristics. In this new book, he offers a parallel look at charity. And that's the problem. Anderson argues in Charity that good works—and particularly the good work of giving alms—generate merit much as evil works generate damage, or debt, or some other problem in the universe. In this neatly symmetrical economy, therefore, good works serve to fill the holes or pay the debts or fix the problems generated by bad ones. And such an economy is widely approved: it's called (although Anderson never refers to it thus) as the dharma-karma construct inherent in all Indian religions.

Anderson enjoys ranging fairly widely in his sources, but not that widely. And he earnestly wants to commend his views to Christians and Jews, and even Protestant Christians who are resistant to any talk of meritorious action. So his challenge is to square this idea of charity generating something very like a credit in a heavenly treasury with a generic Christian reliance on the atoning work of Jesus Christ and even with a Protestant appreciation of sola gratia and sola fide. So I shall respond to his effort as one such a Protestant reader: initially resistant, but genuinely open also to new ideas that can be shown to have adequate scriptural backing. After all, I'm a sola scriptura person as well.

Bible-believers of all sorts can travel a long way with Anderson's concerns, of course. The Epistle of James, yes, but also much of the gospels and epistles by the other apostles make clear that genuine faith—trust in God's salvation to forgive, renew, rehabilitate, and mature—issues properly in appropriate actions. And high on the list of any such faithful actions would be practical care for ...