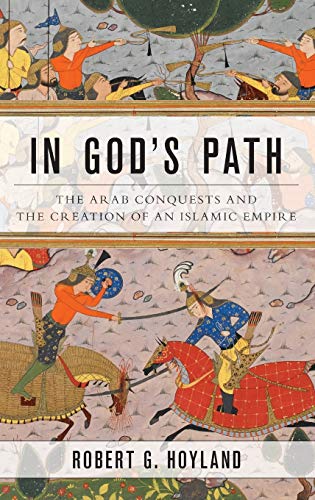 The early Arab conquests and the rise of Islam.

Beginning in the 1940s, Isaac Asimov created with his Foundation series an enduring classic of science fiction. He depicted the development of inconceivably vast galactic empires, guided by the predictive powers of a complex social and behavioral science known as Psychohistory. For millennia, the universe unfolds as it should. Then, overnight, all these plans are utterly confounded by the rise of a messianic prophet called the Mule, a mutant who brings all lesser mortals under his sway, and who conquers all rival empires. Instantly, all psychohistorical bets are off.

In this instance, as in so much else, Asimov took the Mule from the pages of Edward Gibbon's Decline and Fall, and specifically the account of the Prophet Muhammad (570-632). And although Asimov was explicitly writing fantastic fiction, his account often echoes older historical writing on the rise of Islam. We read of the great Roman and Persian empires that dominated much of the known world, until very suddenly, a charismatic leader who believes he is instructed by God gathers faithful followers around himself. Ultimately, these supremely motivated legions pour out of Arabia into the civilized world, conquering most of it within a century or so. In this prophet-centered version, Muhammad is quite as radical a newcomer to the known universe as is the Mule, and his career is equally at right angles to conventional historical reality. He comes from nowhere, and the incredible rapidity of the rise of Islam seems near-miraculous.

Fortunately, the rise of Islamic empires can be explained without invoking either supernatural powers or genetic mutation, and Robert Hoyland's In God's Path offers a very convincing attempt. Hoyland's subtitle deserves careful reflection, with the distinction he draws between Arab and Islamic forces. Historically, many writers begin their story with Muhammad himself, whose mission takes place in an Arab world that has little obvious contact with the great civilizations to the north. Such an image fits well with the Islamic tradition that everything of note began with the new faith, while all previous eras in Arabia were consigned to the age of ignorance and darkness, Jahiliyyah. But that is far from accurate. As Hoyland himself showed in his important earlier book Arabia and the Arabs (2001), an Arab expansion was on the cards long before the birth of the Prophet. Arab conquests were one thing; an Islamic empire was not necessarily identical.

In God's Path is a thoughtful and nuanced guide to an age that was far more complex than we might imagine from older accounts. Most valuably of all, Hoyland distinguishes clearly between strictly contemporary sources, in which he is thoroughly immersed, and the exalted legends penned centuries afterwards. Only when we have finished the book do we realize just how very minimally Muhammad himself featured in the story. It is Foundation without the Mule.

For many Arabs, that age of ignorance was rather an era of power and prosperity. Whether as individuals or tribal groups, Arabs served enthusiastically in the armies and political structures of both the great world empires, Rome and Persia, "the two eyes of the world." Throughout the 6th and early 7th centuries, these two realms were locked in a death struggle, in which each used Arab client states as agents of regional influence. The sons of Ghassan, the Ghassanids, looked to Rome, the Eastern Lakhmids to Persia, and their combined power stretched over much of what we could today call Syria, Jordan, and southern Iraq, as well as northern Saudi Arabia. Both kingdoms were heavily Christianized, an influence that was transmitted to early Muslim thought.

These surrogate states gained new influence during the lethal wars of the early 7th century, as it became clear that either Rome or Persia was destined for extinction. (These were also the years of Muhammad's manhood). The greatest moment of the Persian expansion came in 614 with the capture of Jerusalem, an event lamented in the Qur'an. By 628, the Romans triumphed, crushing Persian military power. But it was a hollow victory, after wars that left the Middle East devastated and starving. When we recall the profound and often violent divisions between Christian sects—above all, the split between pro-imperial Orthodox/Catholic believers, and dissident Monophysites—we realize that by 630 or so, the region was extraordinarily vulnerable to some new external power.

Hoyland rightly stresses the diversity of the potential claimants to such a role, and the range of rival peoples prowling around the fringes of empire, and often stabbing close to its heart. The Balkans held the much-feared Avars, supposedly kin to the Huns, while Turkic peoples roamed and conquered very widely. Most significant were the Arabs themselves, though again, as Hoyland notes, that label ("Arab") was applied over-generously to ethnic groups whom it fitted poorly. Many other fringe peoples were neatly airbrushed out of the conquest history. Critically too, the great imperial armies of both Rome and Persia included huge numbers of these various peoples, Turks, Avars, and Arabs, making nonsense of any simple nationalist narrative.

Allowing for these nuances, the primary beneficiaries of the imperial collapse were the Arabs, who were by now thoroughly acquainted with the worlds to their north, and their military tactics. The Arabs also used nomadic forces with their distinctive methods of warfare and transportation, which permitted the rapid extension of control. From the start of the 7th century, "Saracen" bandits were marauding over Syria and Palestine. A contemporary chronicler in 634 paints a horrific picture of the murder and mayhem wrought by "the Arabs of Muhammad" near Gaza in Palestine, as four thousand villagers perished. As Hoyland remarked in his book Seeing Islam As Others Saw It, this appears to be the very first clear reference to Muhammad in a non-Muslim source. If we are to take this account literally, by the way, this suggests that Muhammad himself was leading the invasion, two years after his supposed death.

Quite apart from any religious element, vast Arab conquests were highly likely from the 630s onwards. But of course, these wars are remembered in religious terms, which brings us to the role of Islam. I confess to a certain surprise here, as Hoyland's account of the role of Muhammad and the interpretation of the Qur'an can in a sense be read as surprisingly conservative. Clearly, he knows the interpretations put forward by writers who date the Qur'an much later, and who see early Islam as a Jewish or Christian revivalist movement that only retroactively made its distinctive claims. (He is a pupil of Patricia Crone). We would not guess the existence of such rival theories from the bare bones account of Muhammad that he offers. Hoyland, though, presents Muhammad as one prophetic figure among several, and again, it is only in hindsight that we see that particular aspect of the wider movement as decisive.

Just as an intellectual exercise, I offer a piece of alternative history that might illuminate the religious character of the Arab conquests. From the late 8th century, Norse peoples carried out aggressive raids and conquests across much of Europe and the Atlantic world, and deep into Russia, often establishing political control. These ventures had no religious causation whatever, but, for the sake of argument, let us make believe that these Norsemen included the followers of a charismatic leader with a distinctive spiritual message—let us call it Thorism. They were a minority of the wider movement, but swiftly expanded their influence. Later historians wrote as followers of that early prophet, and created the idea that the Viking movement was a religious holy war, which resulted in the creation of Thorist kingdoms in England, Ireland, Russia, and elsewhere. So was it really a Thorist holy war? For some followers, yes, but certainly not for all, who were rather motivated by the lust for wealth and power. As time went on, though, Thorist religious justifications grew, and were applied retroactively, as if that was the core of the whole phenomenon. That, I would suggest, is how we might imagine the relationship between Arab and Islamic movements.

Hoyland takes his story through the mid-8th century, and the waning of Islamic expansion. The story culminates with the astonishing Battle of Talas in 751, when the Abbasid Caliphate defeated the forces of Tang China in Central Asia. At every stage, he dismantles of the traditional concept of the overnight Arab/Muslim conquest, and he constantly stresses local conditions and rivalries. He also makes important comments about the means by which the Arabs established their power, with little use of terror or persecution. As he shows, by the end of the great conquest era, Muslim Arabs might have composed barely one percent of the subject peoples they ruled, and they drew as much from those subjects as they contributed to them. Ethnic Arabs soon found themselves amidst a wide sea of cultural Arabs, who wished to join the new order for the advantages of tax exemptions and social privilege.

By those means, "the Arabs' local Abrahamic cult from West Arabia" became the heart of a new civilization, and a new world religion. It is a crucial story, which Hoyland tells powerfully.

Philip Jenkins is Distinguished Professor of History at Baylor University's Institute for Studies of Religion. His book The Great and Holy War: How World War I Became a Religious Crusade was published earlier this year by HarperOne.