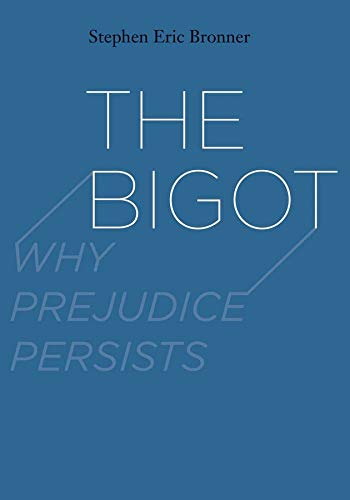 But what else could you expect from “traditional beliefs”?
November/December 2014

If the people who run The Onion ever decide to launch an academic publishing arm, I have a manuscript to recommend. The only problem is that they would first have to buy the rights to The Bigot, from Yale University Press. The book, an exercise in conspiracy theories and amateur psychology, reads like a series of tweets from someone on a cruise sponsored by The Nation. Hashtag #hitlerhomophobeteapartynormanpodhoretzkukluxklan.

This is the kind of book that makes you wonder whether peer review should be anonymous. Because really, when you're done with The Bigot you will want to go to the homes of the people who gave this book their stamp of academic approval and ask in all seriousness: "What were you smoking?"

Stephen Eric Bronner, a "Distinguished Professor of Political Science" at Rutgers, says he didn't write this book "with the naïve idea of converting bigots." Rather it is "to help educate the bigot's enemies." And there's not much point in trying to "compartmentalize" the kinds of bigotry either. Because "prejudices such as anti-Semitism, homophobia, racism, sexism and religious intolerance … intersect in their ideological and political expressions." Spoiler alert: They intersect in the Republican Party, which is basically run by the Tea Party. And neoconservatives. Who have a lot in common with neo-Nazis. I digress, but then so does Stephen Eric Bronner.

Bronner sees bigotry as no less a problem today than it was a hundred years ago. The bigots are just better at hiding their true feelings. But Bronner's got them figured out. And his assumptions allow him to cite a study from the 1920s to justify his pronouncements about bigotry today. So, for instance, "The bigot is most often found in nonurban settings and parochial communities among the lower middle class, low-level bureaucrats, small business owners, individual contractors and farmers—though industrial workers, particularly white men, are among others who can also prove racist and authoritarian."

Bigots are mostly white male hicks, Bronner concludes. And bigots "have always felt at home in the United States," he explains, citing the Ku Klux Klan, the John Birch Society, and the Moral Majority. Have bigots been more at home in the U.S. than in other countries? Which ones have historically been more tolerant? He doesn't mention.

He offers the example of someone in Mali who helped to amputate the left foot and right arm of four thieves. (Someone in the government? Someone acting on his own? We're not told.) The man said, "It is not us who ordered this. It is God." Bronner explains this incident by writing, "myths are easily adaptable to the self serving outlook of the bigot. They are nonfalsifiable by definition, they contest modernity and they rest on traditional beliefs—and that is why they appeal to him." Ahh yes, the problem of traditional beliefs.

It is here that Bronner begins his long slide down the slippery slope. People cut off each other's limbs in the name of "traditional beliefs." Whether those traditional beliefs are that homosexual behavior is sinful or that thieves should only have two limbs or that evolution didn't happen or that "women always want 'it' and blacks are cattle" (another attitude Bronner detects but doesn't actually attribute to anyone in particular), they are all offensive and all within the purview of the bigot.

The way Bronner manages to elide all of these beliefs is positively dizzying:

The bigot tends to emerge from an authoritarian family structure, sacrosanct traditions and an insular community …. The authoritarian family not only enforces sexual repression, which suits most religious and traditional institutions well, but also serves as the "factory" in which the ideology of an authoritarian community is molded. It is well known, for example, that children who have been beaten by their parents tend to find violence acceptable in dealing with the problems of marriage and social life. Breaking the circle of authoritarian influence is a complex and multifaceted endeavor for which there are no quick solutions.

Did you catch that? The bigot tends to be a traditionally religious person who beats his children, and those children grow up to beat their wives—with the support of their churches, of course. In fact, Bronner goes so far as to explain that "Hitler knew what he was talking about when he insisted that he was only finishing what the Church began."

All of these religious folks—umm, bigots—want the state to impose their religious beliefs on others. They oppose pluralism because "pluralism reduces religion to just another claim. Opposing it thus becomes a matter of institutional preservation for Islamic Salafis, or Catholic believers like Opus Dei." No footnote there, or any explanation of how Opus Dei demonstrates its opposition to religious pluralism. In fact, that was the only mention of the group in the book.

Bronner never quite manages to reconcile his views about how the bigots with their traditional beliefs come from the white lower classes with the fact that the groups most likely to practice religion are blacks, Hispanics, and white members of the middle and upper classes. In his haste to dismiss Charles Murray as a bigot, Bronner must have missed his most recent book addressing this question.

But why let facts get in the way? Let's proceed with the psychobabble. People like Martin Luther King, Jr., and Gandhi are okay with Bronner because they were tolerant of others. (I guess he excuses their belief in "myth," or maybe he thinks that they didn't really believe in any.) But the bigot just can't deal with these men:

They were secure in their faith but the bigot playing the role of true believer is not. He fears the Other because his own faith is weak—it is simply a shield to insulate him from criticism and justify his definition of public life. Genuine people of faith are those whom the true believer does not want to know. Their strength he sees as weakness, and their religious tolerance he sees as betrayal.

Still no footnote. But where would Bronner find one? After all, who knows whether the faith of the bigot is real? God, perhaps?

If it is beginning to seem as though Bronner is arguing in circles and simply labeling anyone he doesn't like a bigot, that's exactly the sense one gets from the book. Bigots, he writes, can be discovered through their belief in an originalist interpretation of the Constitution, their opposition to campaign finance reform, and their support of a flat tax. I'm not kidding. "Everyone knows that people of color would disproportionately suffer from a flat tax as well as other regressive attempts to shrink the tax base and, subsequently, bankrupt the welfare state." So obviously the people who support it are racists. And since "everyone knows" this, again, there's no need for a citation.

Like many on the academic left, Bronner is not satisfied with merely suggesting that those who disagree are wrong. They also are evil. And their ideas do not even merit a hearing. He goes after those tricky bigots who "believe that the content of speech is always secondary to the right to speak." (You know, like the authors of the Constitution.) "This logic," warns Bronner, "permits intolerance, places stupidity on the same level as intelligence, and attempts to bind future generations to the ignorant prejudices of those that preceded them. 'Repressive tolerance' is willing to accept hate speech, flat out racism, the denial of global warming, or the rejection of evolution as mere matters of opinion." Well there's a good reason to throw out the First Amendment tomorrow. You know, like they regularly do on college campuses.If you've ever wondered just how impenetrable the bubble of higher education can be, this book is the answer. "The bigot," as Bronner writes, "is always primarily concerned with proving what he already thinks he knows." Sounds like someone else I know.

Naomi Schaefer Riley is the author most recently of Got Religion? How Churches, Mosques, and Synagogues Can Bring Young People Back (Templeton Press).