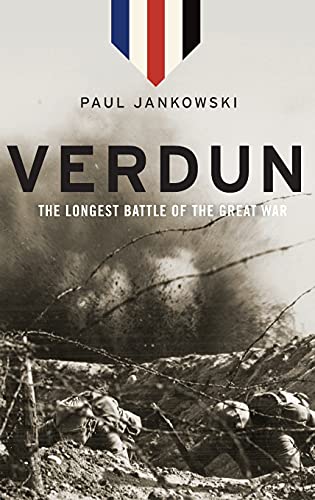 The Battle of Verdun.
March/April 2014

The centennial of World War I means that that conflict is now attracting a degree of public interest unprecedented since the 1930s. Yet for all the events that historians are now presenting to a new generation, one above all stands out in popular memory for its sheer destructive impact, and for what it revealed about the frailty of Western civilization. In February 1916, a German offensive began the Battle of Verdun, at three hundred days perhaps the longest battle in history. In Alistair Horne's words, it also created "the battlefield with the highest density of dead per square yard that has probably ever been known." So overwhelmingly significant is the struggle in Western memory that no excuse is needed for yet another detailed study, and Jankowski's revisionist book is a major achievement.

So many of the statistics of Verdun still astonish. The battles were focused on a narrow front of 15 miles, where the intensity of destruction beggared belief. In five months, the two sides fired a combined total of 23 million shells. At least two and a half million fought there, and by the time the battle ended in December, it had inflicted 800,000 French and German casualties.

Making matters worse, that immense carnage was far from unexpected. The principal German goal was to capture the key fortress that was the centerpiece in one of the world's most powerful networks of military fortifications. However, their additional aim—such at least has long been maintained by historians of the battle—was not so much to win any piece of ground as to force the French to defend the place at all costs, to begin a battle of attrition that would kill countless legions of France's best and strongest young citizens. They also knew that this goal must of necessity involve sacrificing hundreds of thousands of their own soldiers, who became pawns on the blood-drenched chessboard. This was massacre by design.

Much of the story is reasonably well known, not least from Alistair Horne's classic The Price of Glory (1962). Jankowski, though, is abundantly qualified to present a new standard work on the subject. A well-respected scholar of French politics and culture, he has delved deeply into the contemporary sources from that nation, but he is no less at home in the copious German archives. The writing throughout is of the highest order, to a degree that may startle any reader with a dated stereotype of military history as a mechanical recounting of military formations—what is now dismissed as "left flank/right flank" storytelling. At every stage, Jankowski integrates the military narrative with broader political and cultural dimensions. He also integrates the older, top-down approach—how General X made great decisions with his key staff officers—with the more contemporary emphasis on the ordinary soldiers in the trenches, how they lived and died, and how—most mysteriously—they resolutely continued fighting despite their inconceivable losses. Jankowski's book offers a model history of warfare, even if not every argument convinces.

Jankowski is particularly good on what we might call issues of myth and memory. Verdun was a fertile source of mythology, not least over its fundamental aims. Whatever both sides later claimed, did the Germans really set out from the beginning to wage an ultimate battle aimed at bleeding the French white, at inflicting Ausblutung? General Falkenhayn claimed that he intended this, citing a cold-blooded memorandum he allegedly wrote the previous Christmas. But that document has never turned up, and some historians have questioned whether the battle was indeed intended as the ultimate clash of rival civilizations, or if it somehow morphed into such a cosmic conflict. Jankowski's conclusion: "A secondary battle, begun tentatively by one side and accepted reluctantly by another, became in this way a battle for national survival, centering on a place whose millennial historical significance acquired a retroactive glow it had never enjoyed in its lifetime." In the end, that issue of intent does not matter greatly, but the debate allows Jankowski to present a convincing picture of the complex dilemmas facing the German regime.

Repeatedly, he shows how writers on both sides, at the time and subsequently, elevated the struggle to mythological significance, making the Verdun fortress almost a national idol—for the French, "the Atlantic Thermopylae of the West." The more they lauded the site and consecrated its very name, the harder it became simply to abandon an aged fort and re-establish a new defensive line. Far better to carry on pouring new consignments of ordinary conscripts into the front line's ever-efficient mincing machines. National honor was at stake! Both sides fell into what Jankowski aptly calls the Prestige Trap. So central are such themes of image and self-delusion that I wonder if, in its earliest incarnations, Jankowski might have toyed with the title The Myth of Verdun.

Soberingly, he challenges the common view of Verdun as utterly unprecedented in its human cost. While not understating the human toll, he also notes how many other battles in the Great War had involved much higher casualty rates, not least the astonishingly lethal Battle of the Frontiers in 1914, when the French lost tens of thousands on single days. (That earlier conflict is all but absent from Anglo-American historical consciousness.) Mythology, though, demanded that Verdun be unique, unparalleled, an unprecedented glimpse into the mouth of Hell. "Posterity mistook the subjective imaginings of men for the objective realities of the war, and conferred upon Verdun a mantle of singularity in suffering that other sites of the war might justifiably contest."

In this as in so much else, Jankowski is undoubtedly right about the degree of mythmaking, although we might question his underplaying of the battle's real significance. Other battles have likewise begun with scattered and ill-planned scuffles, although they undoubtedly did evolve into thoroughly decisive struggles: we think of Gettysburg. Also, if we think how Verdun might have developed, it is not too difficult to imagine an outcome that really did lead to the collapse of French military power, and with it an epochal reconstruction of Europe and of the global balance of power. And if the French had simply abandoned Verdun, how much further could they retreat before settling on a line that absolutely had to be defended at all costs? Verdun lies only 160 miles east of the heart of Paris. Were contemporaries really so wrong to imagine Verdun as Thermopylae? Was France's survival not literally at stake?

However inaccurate those "subjective imaginings" of the conflict might have been, they had a lasting impact that endures today, and that is especially true in the spiritual realm. Struggling to comprehend the slaughter they were living through, both sides resorted freely to religious imagery. Given the overwhelmingly Christian foundations of European culture in that age, how could matters have been otherwise? From its beginnings, the attack on Verdun was codenamed Operation Gericht, "Judgment," and both military and media sources readily lapsed into God-talk. By far the commonest image was that of sacrifice, with its implications of voluntary redemptive bloodshed. On both sides, soldiers shed their blood for national resurrection, dying that others might live. Already too, both sides were adopting the language of immolation, of (voluntary) holocaust. For participants, though, the battle raised fundamental questions about all religious assumptions and rhetoric, and the nature of Christian societies. The reigning deity of Verdun was Moloch.

Some of those religious perceptions lingered for decades, naturally enough when we think of the lengthy later careers of some of those soldiers. Paul Tillich served in the battle as an army chaplain, and he experienced a life-changing epiphany. He observed the collapse of older hopes and aspirations, writing that "the World War in my own experience was the catastrophe of idealistic thinking in general … . If a reunion of theology and philosophy should again become possible, it could be achieved only in such a way as would do justice to this experience of the abyss of our existence." Serving on the French lines were a number of men who later became—or already were—influential Roman Catholic thinkers, among them Henri de Lubac and Étienne Gilson. In his first speeches after his election last year, Pope Francis quoted de Lubac and Bloy. The latter was a venerated Catholic mystic who during the battle published a commentary on the times entitled On the Threshold of Apocalypse. The Catholic Church still lives under the shadow of Verdun.

Was it possible to witness Verdun without facing searching questions about the whole basis of Christendom? Was "Christian civilization" an oxymoron? As the battle raged that summer, one non-combatant thinker was agonizing over that question. Just two hundred miles from the battlefield, in neutral Switzerland, Karl Barth was seeking answers in Paul's Letter to the Romans, which described how even the best-intentioned human beings succumb to the world's temptations. Barth portrayed a world fallen into illusion and self-deception, a world prepared to annihilate a whole continent in the name of the false gods they erected—such idols as patriotism, nationalism, and honor. He demanded that Christians reject the world's false claims to allegiance, its Prestige Trap. Much of Protestant theology over the following century amounted to a commentary on the insights of Barth, Tillich, and others of the Verdun generation.

Philip Jenkins is Distinguished Professor of History at Baylor University's Institute for Studies of Religion. His book The Great and Holy War: How World War I Became a Religious Crusade is coming this spring from HarperOne.