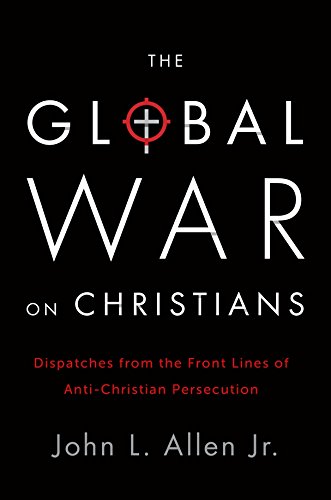 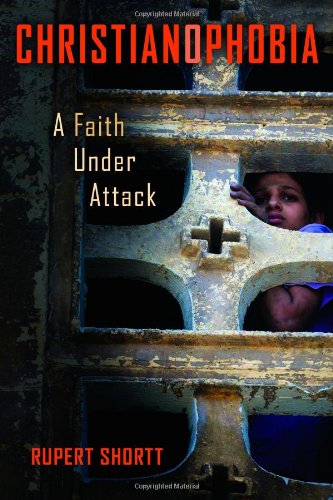 Their Blood Cries Out

On violence against Christians.
July/August 2014

Rupert Shortt and John Allen want readers to wake up. In books chock full of details—names, dates, places, circumstances—they document violence against Christian believers that in various forms has been building steadily in many parts of the world. Shortt, religion editor of The Times Literary Supplement, and Allen, senior correspondent for the National Catholic Reporter, realize that they are addressing issues of great moral complexity. Both know that "religious persecution," "martyrdom," and related terms are hotly contested. Both are fully alert to the myriad objections—historical, theological, political, diplomatic, cultural, anthropological—that might respond to titles like "Christianophobia" and "the global war on Christians." Yet Allen and Shortt also say, in effect: "Yes, questions of definition, historical culpability, ethnic or religious differentiation, moral responsibility, and more are fiendishly complex. But it is not necessary to resolve all such issues before taking account of what is actually occurring, recurring, and occurring again at many, many places around the world." While neither author does in fact answer all of these questions, both books should nonetheless be exceedingly helpful for raising the consciousness of even the most casual readers.

John Allen opens with a visit to the Me'eter military camp and prison in a desert region of Eritrea near the African coast of the Red Sea. He describes the deplorable living conditions for the 2,000-3,000 people who are interned in this camp because they belong to branches of Christianity that Eritrea's single-party, hypernationalist rulers, the People's Front for Democracy and Justice, consider subversive. Their lot consists of desert heat, frigid nights, bodies crammed into unventilated 40' x 38' metal shipping containers, mindless tasks like counting grains of sand, death from heatstroke and dehydration, sexual abuse, and brutal beatings.[1] And Allen wants to know "why the abuse at Me'eter doesn't arouse the same horror and intense public fascination as the celebrated atrocities that unfolded at Abu Ghraib, for instance, or at Guantanamo Bay. Why hasn't there been the same avalanche of investigations, media exposés, protest marches, pop culture references, and the other typical indices of scandal? Why isn't the world abuzz with outrage over the grotesque violations of human rights at Me'eter?"

Rupert Shortt begins the world tour making up his book with a stop in Egypt and an interview with Dr. Ibrahim Habib, who now practices medicine in the British Midlands. Habib left Egypt after a gruesome incident in 1981 that took place in a Cairo suburb, al-Zawia al-Hamra. Local Muslims who wanted to build a mosque on land owned by Coptic Christians attacked violently with (according to Habib) "at least eighty people … killed in the violence, some people … burnt alive in their homes, and the police just looked on." Shortt then documents how the influence of Salafist Wahhabi Islam, which arose after the formation in 1972 of Gama Islamiya, has become more intense over the years, often with fatal results.

• December 2010: twenty-one killed and seventy wounded in an attack on worshippers at Mass in the Two Saints' Church in Alexandria.

• February 2011 (shortly before the resignation of President Hosni Mubarak as the "Arab Spring" arrived in Egypt): more than twenty killed when a car bomb exploded outside of St. Mark's Church in Alexandria.

• March 2011: thirteen killed and more than one hundred wounded when Copts, who had gathered to protest the burning of St. Min and St. George's Church in a village near Cairo, were set upon by a larger crowd of Muslims with guns, clubs, and Molotov cocktails.

Shortt concludes his survey of Egypt with the understated reminder that Copts, whether in Egypt or abroad, "remain deeply concerned about the future of their battered church."

The propensity for some of us who read such accounts might be to raise the interpretive "but." But don't such reports overlook the Christian violence against non-Christians, not to speak of the Christian-on-Christian violence, that has so disfigured the history of Christianity? But is violence in places like Eritrea or Egypt really religious persecution or merely the last chapter in historical ethnic conflict? But aren't perpetrators of such violence responding to Western blunders like the 2003 invasion of Iraq? But … But … But….

Shortt and Allen know that such questions are germane, but they are also impatient with how otherwise legitimate inquiries get in the way of seeing multiplied instances of egregious human tragedy. Both authors, for example, record the story of Aasiya Bibi (or Aaasi Noreen), a Pakistani Catholic imprisoned in 2009 for blasphemy, the next year sentenced to death and fined 300,000 rupees (a staggering sum), and held since that time in solitary confinement pending appeals. The occasion for this prosecution could hardly seem more trivial. This mother of five, from peasant stock in the Punjab, was harvesting berries under a blistering sun when she drank from a local well that local Muslim women considered sacred to their religion. An exchange of words followed during which Bibi was accused of slandering the Prophet.[2]

The sequel gets worse. Salmaan Taseer, the governor of the Punjab and a Muslim, protested Bibi's trial as a miscarriage of justice, but then he was assassinated by one of his own bodyguards, Mumtaz Qadri, who objected to Taseer's complaints about the Pakistani law against blasphemy. At the trial of this killer, spectators showered the defendant with rose petals; the judge who passed sentence on the accused fled the country out of fear for his life.

Another official who protested against Bibi's treatment was Shabbaz Bhatti, Pakistan's minister of minority affairs and as a Catholic the only non-Muslim in the national cabinet. Like Salmann Taseer, Bhatti not only began an official investigation but also visited Mrs. Bibi in prison. He was shot and killed on March 2, 2011, by an assassin who remains at large.

The most unusual aspect of this incident is the publicity it received outside of Pakistan. That coverage responded to the self-sacrificing efforts of Taseer and Bhatti, but also to a book written clandestinely by a French journalist with Mrs. Bibi's cooperation.[3] Other incidents—though involving much more violence, many more fatalities, but also much less international publicity—have become routine in Pakistan and many other parts of the world.

The carefully documented case studies that fill these books are important for many reasons. Most obvious is the breathtaking range of human brutality they describe that has been—and is being—visited on many types of Christians. The violence also falls metaphorically on principles of religious freedom and simple humanity. It is not pleasant reading. Whether perpetrated by Islamists in much of the Arab world and quite a few places beyond; radical Hindu nationalists in India; dictatorial regimes in Belarus, Cuba, China, Vietnam, North Korea, Eritrea, and elsewhere; and not excluding violent attacks by Christians on other Christians in Russia, Mexico, Colombia, and a few other places—whether by torture, rape, solitary confinement, decapitation, fatal beatings, gunshot, car bombs, and more—the blood of the victims, with the aid of Shortt and Allen, cries out.

A second, somewhat reassuring awareness prompted by the books, however, is to realize that many others have been paying attention. A few academics like Daniel Philpott, Timothy Samuel Shah, and Monica Duffy Toft are commended by both authors for their careful studies of religion, violence, and political systems.[4] But mostly that work is being carried out by self-sacrificing ad hoc agencies—including Aid to the Church in Need, Barnabas Aid, the Catholic Near East Welfare Association, the Centre for the Study of World Christianity, Christian Freedom International, and Christian Solidarity Worldwide—which have been faithfully documenting such abuses (and also abuses against members of other religions) for a long time.

Another salutary effect of these books is to compel humility. Shortt and Allen do not shrink from showing that if Christians of various kinds now suffer disproportionately from religiously inspired violence, that is no cause for moral smugness. On this score, they could have quoted Montesquieu's Persian Letters: "I can assure you that no kingdom has ever had as many civil wars as the kingdom of Christ." Or Albert Raboteau's well-considered conclusion that "the suffering of African American slave Christians" at the hands of other Christians is "the prime example of the persecution of Christianity in [American] history."[5] A checkered history should not paralyze a needy present, but neither should it be forgotten.

The authors—Shortt somewhat fuller in documentation and geographic comprehension, Allen somewhat more direct in drawing conclusions for edification and action—explore many other compelling issues. They show, for example, that "the Arab spring" has become a "Christian winter" throughout much of the Middle East. Allen also explains convincingly why, when considering outcomes, there is not a great deal of difference between believers killed because they are Christians and believers killed because their Christian callings put them directly in harm's way.

Yet their most enduring message concerns the character of Christian faith itself. In 2011 Shortt interviewed Afghans who after converting to evangelical forms of Christianity had been forced to flee for refuge to Europe or India. One of them, who had been taught to view all non-Muslims as satanic, was eventually drawn to Christian faith. For him the attraction was "God's self-offering in Christ, the characteristically Christian notion that victory can be won through apparent defeat, and that Christians have the status of adoptive children through the Spirit of Jesus." Shortt reports that despite ostracism, mortal threat, and forced immigration, this Afghan believer did not regret his conversion. Instead he affirmed that "the gospel had freed his conscience and imagination … especially in its emphasis on the core principle that forgiveness precedes repentance, not vice versa."

Similarly moving were words that Shabbaz Bhatti recorded on video only weeks before he was killed for trying to help Aasiya Bibi, and after he had received many threats against his life: "I am living for my community and for suffering people and I will die to defend their rights… . I want to share that I believe in Jesus Christ, who has given his own life for us. I know … the meaning of the Cross and I follow him on the Cross."

Because of such testimonies, Christianophobia and The Global War on Christians are almost as inspiring as they are frightening. To read them is to weep. But it is also to grasp the wisdom of a slogan popularized by Catholic Action in the middle of the last century: Observe—Judge—Act.

Mark Noll is Francis A. McAnaney Professor of history at the University of Notre Dame. He is the author most recently of From Every Tribe and Nation: A Historian's Discovery of the Global Christian Story, coming in October from Baker Academic.

1. See the Amnesty International 2013 report on Eritrea, including information about the death of a Jehovah's Witness at Me'eter, www.amnestyusa.org/research/reports/annual-report-eritrea-2013?page=2 (4-24-13).

3. Available on a Kindle edition in English as Blasphemy: The True, Heart-Breaking Story of the Woman Sentenced to Death over a Cup of Water (Virago, 2011).