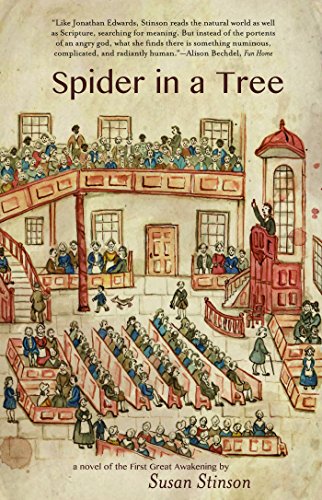 A Novel of the Great Awakening

While we might not always trace the idea back to Aristotle in the Poetics, most of us are familiar with the idea that art imitates life. In fact, we're more than simply familiar with such a concept. We know it. Intimately. Perhaps we've experienced the adage while viewing the realistic works of Éduoard Manet or Edward Hopper. Such experiences, of course, aren't limited to canvases in museums. Maybe you've cringed or, like the woman seated next to me in the theater for a recent viewing of the film Twelve Years a Slave, covered your eyes while watching an extremely realistic movie. Even the casual reader has likely read fiction or poetry that illustrates clearly that the great philosopher was correct in claiming that "all delight in works of imitation." This power of "imitation" is one of the primary reasons I find myself drawn time and time again to the works of authors such as Wendell Berry, Wallace Stegner, and Marianne Robinson. Usually, though, I haven't found the same experience when I read historical fiction. Usually, but not always, as I found recently while reading Susan Stinson's novel on the First Great Awakening. And I suspect that many readers will come away from Spider in a Tree, as I did, not only marveling anew at art's ability to imitate life, but also recognizing that the best art informs and influences our grasp of life.

Stinson's book focuses on the life of Jonathan Edwards, his family, and the town of Northampton, Massachusetts, over two decades of the 18th century, including the years of the colonial revivals known contentiously by historians as the First Great Awakening. She frames her narrative with two possibly regrettable decisions that affected Edwards' life—his own decision to purchase a young African girl in 1731 to serve as one of his family's slaves, and the Northampton congregation's decision in 1750 to remove their famous minister from office. Because Spider in a Tree revolves around both the consequences and the causes of these separate decisions, these moments serve as fitting bookends for Stinson's detailed description of life and society in the 18th-century world.

As a historian of the intersections between "race" and religious thinking in the New England colonies, I found myself enthralled with Stinson's continuous interaction with primary documents from the period, touching on nearly every component of colonial life. Sometimes she does this by simply alluding to original sources to paint a portrait of how events might have occurred. For example, in Chapter 14 Stinson builds on various newspaper accounts to imagine vividly James Davenport's 1743 bonfire of vanities in New London, Connecticut. On many other occasions, Stinson quotes directly from the writings of the period, ranging from the letters of evangelist George Whitefield to Northampton church records.

Unsurprisingly, her richest source is Edwards himself. Throughout the novel she relies on excerpts from Edwards' letters, which are loaded with details that bring the time and place alive. (A number of letters, for instance, highlight the interest of his wife, Sarah, in herbal medicines and folk remedies.) Stinson's integration of his letters, sermons, and various other writings into her narrative lends a rhythym and cadence, perhaps even an ethos, that makes the story feel authentic. While this will especially seem the case to those readers who have spent time with the words of the Northampton theologian, those who have not done so will not find her use of such documents intrusive or distracting. Rather, they prove immensely helpful.

Nowhere is this more true than in the Chapter 9 account of the 1741 Enfield preaching event of "Sinners in the Hands of an Angry God," in which Stinson weaves the minister's own words together with her captivating description of the responses of his listeners—laity and clergy alike. Had Spider in a Tree not included such evocative 18th-century language, the story Stinson tells would seem incomplete.

Stinson's work not only shines in how she uses 18th-century texts but also in what she makes of colonial characters. With Rebekah Hawley's concern for the standing of her sons, we're made palpably aware of the pressures of a status-conscious society. And Stinson's depictions of the Edwards family, especially Jonathan and Sarah, drive Spider in a Tree. Sarah Edwards' spirituality, but also her concern over how parishioners viewed her and her family, aligns with the Sarah known from Edwards' writings, just as Stinson's characterization of Jonathan as an awkward, aloof, and ambitious minister with a powerful mind and keen concern for the "images of divines things" all around him fits well with the Edwards of recent historical and theological scholarship.

Stinson's masterful use of historical texts to imagine 18th-century Northampton and its inhabitants makes this volume stand on its own as a work of art. But she goes further still, weaving together several themes, like strands of a web, in order to both imitate life in colonial New England and help her readers comprehend more fully life in such a time and place.

One strand of Stinson's intricate account of 18th-century Northampton focuses especially on the place of enslaved Africans in the northern colonies. Her portrayals of the realities, complexities, and contradictions of race-based slavery in New England situates Spider in a Tree as one of the more useful treatments of the subject available—either fiction or nonfiction. The experiences of African characters, such as Venus or (Leah), Saul, and Bathsheba, come to life in Stinson's writing. While I remained riveted by her handling of their personal relationships with white New Englanders and with other enslaved Africans, as well as their attempts both to retain their own cultural traditions and to adapt to new ones, I never quite recovered from Chapter 1. In June 1731, Jonathan Edwards traveled to Newport, Rhode Island, to purchase an African girl, Venus, as a slave. This episode, treated recently in historical scholarship by Kenneth Minkema and myself, hits the reader full-force within the first few paragraphs of the novel. Here, in a book about the First Great Awakening, is something entirely unexpected, namely, race-based slavery. Even though I was fully aware of this event, the fictional re-creation of it hit me hard. And this is only the beginning of Chapter 1, which proceeds to tell the story—one I argued for in my own Race and Redemption in Puritan New England—of the minister's decision to mark the girl as his property by changing her name from Venus to Leah. Throughout the remainder of the two decades described in the novel, then, she remains Leah to everyone around her in Northampton. Art imitating and informing life in a chilling way.

Another strand of the weblike tale that Stinson weaves skillfully in Spider in a Tree is her description of the religious and social milieus of colonial New England, especially as experienced within the colonies' Puritan context. Not only is this seen directly in the ways in which she engages the enthusiastic world of excesses found during the years of the First Great Awakening, but also in countless by-the-way instances showing how religious commitment and thinking infused everyday life, whether within the minister's manse or in the homes of ordinary laypeople. Such thinking spills over, of course, into the ways townspeople treat each other (see Rebekah Hawley and her negotiating the illicit relationship between her son, Elisha, and Martha Root). Without intruding into the narrative, Stinson seamlessly describes a world that was marked by notions of deference within society, by clearly defined gender spheres and roles, by ideas about one's station in life, and by decidedly religious commitments.

Building on much of the historical work produced in recent years on the life and thought of Jonathan Edwards and the First Great Awakening, Stinson crafts a tale that gives her readers fascinating glimpses of New England towns in the mid-18th century. While Spider in a Tree does not do away with the need for books like George Marsden's Jonathan Edwards, Catherine Brekus' Sarah Osborne's World, or Thomas Kidd's The Great Awakening (to name only three), Stinson's novel certainly complements such historical analyses. She also likely reaches an audience that scholars generally miss, offering an artistic story that in its imitation of life greatly informs our ability to understand the world of the First Great Awakening.

Richard A. Bailey is an associate professor of history at Canisius College in Buffalo, New York. His recent book Race and Redemption in Puritan New England (Oxford Univ. Press) was issued in a paperback edition this spring.