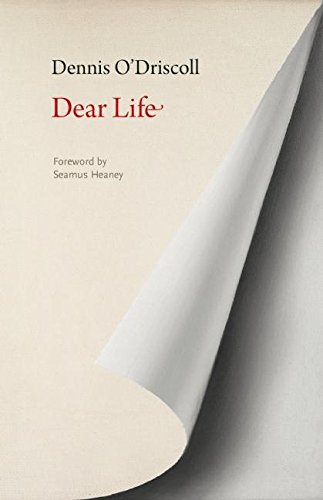 How It Will Be

On dull Friday nights back in college, a friend and I sometimes played a game we called "Cliché." One of us lobbed a cliché, the other responded in kind, and back and forth we went until one of us came up empty. Anyone who picks up Dear Life, the ninth and last book of poems by Irish poet Dennis O'Driscoll, will immediately understand why it made me think of Cliché for the first time in many years. Some people do miraculous things with chicken. In Dear Life, O'Driscoll works magic with clichés.

Many of the poems explore business and consumer culture, and the characteristic cliché of each. The narrator of "Compo" tells us to "Be absolutely apoplectic. / Fuming mad," at the outset of a litany of complaints that concludes:

Someone has to take the rap.
You're fed up to the teeth.
Won't stand their crap one minute longer.
Heads must roll.

In a marvelously funny and wise poem called "Sub," the narrator asks whether, if "life were touted / like a magazine subscription, would you—/ knowing what you do now—sign up?" No we wouldn't, he concludes. We surely would check the box saying "Send no further offers" or the one "marked 'No, thanks.' "

The decline of faith in Ireland as it morphed into a fast-paced, secular Celtic Tiger (until tamed by the recent recession) comes in for similar treatment. "Our Father" recounts the long history (as the narrator sees it) of God's silence. We "upp[ed] the ante" in the face of God's "[s]tony silence," "[c]old shoulder," and "[f]urther snubbing ," the narrator says, finally rolling out "our nuclear option, / proffering our ace card: / the heart-on-sleeve / one intimating 'love.' " In "Imago," Jesus is described as "[s]ome showman, up to his god-like tricks, on tour for a limited run only," ...