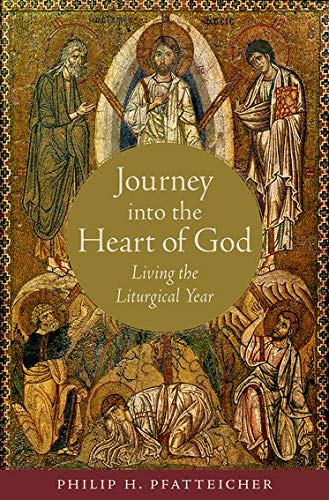 Divine reality is like a fugue. All [God's] acts are different, but they all rhyme or echo to one another … . Fix your mind on any one story or any one doctrine and it becomes at once a magnet to which truth and glory come rushing from all levels of being.—C. S. Lewis, God in the Dock

It's not just divine reality that's like a fugue. As Philip Pfatteicher portrays it, the church year is a fugue, too, with all the truth and glory of divine reality rushing toward any one season—or even a single image from that season. In his beautiful book, Journey into the Heart of God: Living the Liturgical Year, he explicates the church year the way the best literary scholars explicate poems, which makes sense because he's (among other things) an English professor. As he would with a great poem, Pfatteicher seeks and finds the many and varied internal resonances among the church seasons and brings them to light for his readers—and it is a beautiful light, one that made me fall more deeply in love with the rich texture of the Christian year.

This is not a book directed primarily to the general reader. It was written for liturgists by a liturgist—one with a deep and wide knowledge of the various prayer books of the Roman Catholic, Anglican, and Lutheran traditions. For example, about the "Sunday within the Octave of Christmas" Pfatteicher writes:

The first reading in Year A was introduced as the (Old Testament) Lesson for the First Sunday after Christmas in the 1958 Lutheran Service Book and Hymnal; the second reading in Year B was appointed in that book, in the 1928 Prayer Book, and in the previous Roman lectionary; the Gospel in Year B was appointed in the Service Book and Hymnal following medieval and the Roman lectionary. The Gospel in Year A is an expansion of the Gospel for the Second Sunday after Christmas Day in the 1928 Prayer Book.

Since I'm not a liturgist myself, this sort of thing made my head spin. Fortunately, ...