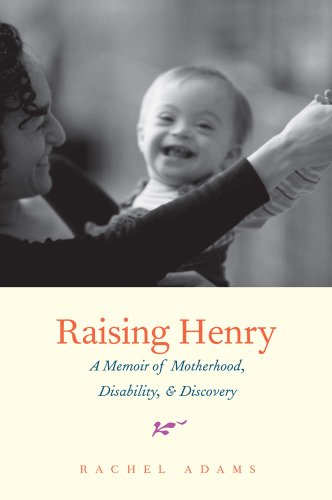 Raising a child with Down syndome.

On the front of the dust jacket of Raising Henry: A Memoir of Motherhood, Disability, & Discovery, Rachel Adams is smiling. She holds her son—clearly the Henry named in the title—in a playful dance, his small hand in hers, while he grins at the camera. It's a sweet, mother-and-child image that captures the close affection and mutual delight that I've known with my own sons, and I immediately found myself wanting to learn more about this woman and about her son Henry. What's not to love?

When her first son, Noah, is born, Adams is already a published author, a professor of English at Columbia University, and has been with her (similarly successful) husband, Jon, for 13 years. Having lost her own mother as a child, and having been raised to measure success in terms of academic and professional achievement, she finds the transition to motherhood painful at first. She wishes she could feel as comfortable behind a stroller as behind a lectern. "I disliked staying home with my baby, and I hated myself for disliking it," she says.

Gradually, however, Adams grows to accept her new role and to truly love her child. And as the birth of her second son approaches, she looks forward to his arrival with high hopes. He will be the perfect addition to their little family. Before Adams goes into labor with Henry, she is already in love with the healthy, beautiful baby she expects him to be.

In the moments after Henry is born and his diagnosis of Down syndrome is revealed, however, her hopes and expectations fall, unceremoniously, to the delivery room floor. Henry enters the world like a sledgehammer, smashing Adams' carefully laid plans to rubble: "I couldn't stop crying. I'd like to say I cried because I was worried about the baby upstairs in the NICU. But I didn't feel much of anything for him. I was mourning the loss of the son I thought I was going to have and the family I imagined we would be."

It's hard to fault her for her emotions at that moment. As the mother of a child battling cancer, I understand the shock of hearing hard news from a medical professional, and I have felt the weight of the life-altering decisions required to cope with that news. A great deal of Adams' story resonated with my own experiences. But more often than not, as I read her account of the birth and first few years of her son's life, I found that I sorrowed for her less for the challenges arising from Henry's mental and physical disability and more for the challenges arising from her own spiritual disability.

While Adams' mind is terribly bright, her path lies in terrible darkness. When it comes to facing the bigger questions, the deeper struggles, the darker fears, Adams has nothing to hold onto but empty fatalism. "At bottom," she says, "we humans are meat just like the lamb on my plate."

Adams' understanding of what we all are at bottom calls into question the possibility of meaning for Henry's life—or any life. Yet she seems to prefer that meaninglessness to the religious alternative. Before her husband's Bible Belt parents meet Henry, she says, "I told Jon I couldn't bear it if they talked about God." And after other relatives visit, she is relieved when she realizes that "nobody had mentioned God or angels or Jesus. Nobody had described Henry as a gift or a blessing."

"I don't live in the kind of world," she says, "where people say that Henry was sent to us for a reason."

If I were living my life as an outworking of Adams' worldview, I imagine the ultimate pointlessness of it all would crush me. At times, it seems nearly to crush her. And it certainly affects both her day-to-day decisions and her most momentous choices.

Rachel Adams lives in New York— a city with an abortion rate that is nearly double the national average—and in an era when, according to one government study, the abortion rate for children diagnosed with Down syndrome has reached upwards of 90 percent. That Henry survived the womb at all is a statistical improbability, and Adams feels compelled to explain Henry's existence: "We live in a world," she says, "where a baby like Henry demands a story."

"I never had an amniocentesis," she writes:

I know. This is shockingly risky behavior on the part of an ambitious, overeducated, overachieving person like myself. Amnio was made for people like me, women with a deep need for order and control and perfection. Women who strongly believe in the right to an abortion. Technology was supposed to liberate the woman who needs to know she will never have to be the mother of a child like Henry.