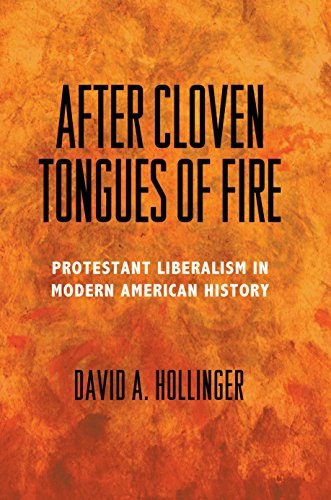 David Hollinger is a wonderfully insightful American intellectual historian who is probably best known in evangelical intellectual circles as one of the most vocal and persistent opponents of the project of bringing explicitly faith-informed scholarship into the mainstream academy. On that topic, Hollinger, who is usually mild-mannered and generous, sometimes goes ballistic. So in his most recent book, After Cloven Tongues of Fire, a collection of essays billed as about "Protestant Liberalism in Modern American History," he includes two essays with the provocative titles: "Enough Already: Universities Do Not Need More Christianity" and "Religious Ideas: Should they be Critically Engaged or Given a Pass?"

I should say at the outset that I consider David Hollinger a friend. We once spent a semester as visitors in the same academic department, and I think we struck it off as kindred spirits in many respects. Even when we discussed our wide differences regarding Christian scholarship, I think we always did so amicably. That is in good part thanks to his being the amiable and generous person he is. Our affinities arise also from the fact that we both had strongly Protestant upbringings and we study many of the same things. After Cloven Tongues of Fire is not only autobiographical in the sense most history books are, but it also contains a candid autobiographical essay. The volume's title suggests historical themes that parallel the autobiographical. After the charismatic intensity of Pentecost has passed, liberal Protestantism and post-Protestants often still embrace a version of that early Christian ideal of one unified humanity. Like many who have left the church, Hollinger is a champion of "love your neighbor as yourself" who would apply that rule in ways that put many of us church people to shame.

Hollinger writes from an explicitly post-Protestant perspective, a viewpoint that fosters many acute insights into the historical topics he discusses. American culture today, he argues, is best understood as post-Protestant. As late as 1960 anything big in America was likely to be run by someone of Protestant background. In the mid-20th century mainline Protestants could till speak as though they had a proprietary oversight of the culture as a whole. One of Hollinger's most important themes is that Protestantism had succeeded in retaining its influence in mainstream culture by accommodating itself to the American Enlightenment. Darwinism had threatened to disrupt that accommodation, but post-Darwinian Protestants found various ways to preserve aspects of their heritage that could survive in the new scientific age. The volume includes three illuminating, empathetic, but devastatingly critical essays on William James's agonized efforts to reconcile the essence of religious experience with modern science. Reinhold Niebuhr, who in turn made his own accommodations to modernity, was still widely applauded when he insisted that themes drawn from the Christian, or at least Judeo-Christian, heritage were essential to a healthy public life. In the meantime a brilliant cadre of Jewish intellectuals were arguing effectively that American life should be grounded on more consistently secular and universal enlightened principles.

By the 1970s Niebuhr's world had largely disappeared. Mainline Protestantism's proprietary outlooks had dramatically receded, and its denominations were declining numerically. The Religious Right tried to fill the cultural vacuum by offering its own version of a Christianity-based America. Yet, even though mainline Protestants have diminished numerically, institutionally, and in influence, Hollinger suggests that they have in a sense "won" in that they have helped to shape a more tolerant, anti-racist, anti-sexist, anti-imperialist, supernaturalism-resisting American public culture. Hollinger admits this evaluation is hyperbolic; still, he thinks "there is something to it."

But enough already about illuminating historical points—let's get to his polemics. Hollinger has been dead-set against the project that many readers of this magazine would endorse: the project of making mainstream intellectual life more open to scholars who explicitly ask what difference traditional Christian theism or other religious-intellectual traditions might make in understanding and relating to the rest of reality. After Cloven Tongues of Fire not only reiterates that opposition, it also offers important insights for understanding why such an honorable and clear-headed person would so strongly oppose what seems to many of us an eminently reasonable proposal.

I loved this book review. Marsden models how to engage Christianly with the intellectual "other". May we all think and speak so carefully about ideas with which we disagree and the people who hold those ideas. Rock on, George.