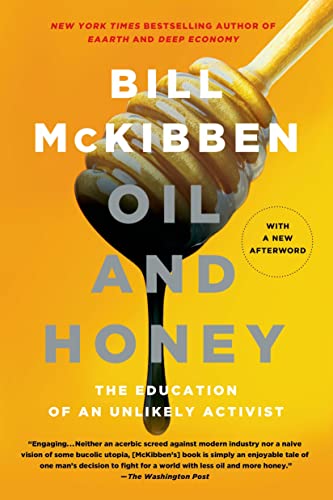 In 1989, Bill McKibben published The End of Nature, the first book explaining global warming to a general audience. Even then, climatologists held consensus that it was unacceptably dangerous to flood the atmosphere with heat-trapping pollutants. In his latest book, McKibben describes his reaction at seeing The End of Nature become a bestseller: "I assumed, like most people, that reason would eventually prevail—that given the loud alarm sounded by scientists, governments would take care of the problem." The following 20 years taught him that power trumps reason. As findings from climatologists grew more dire, as freak disasters such as Hurricane Irene and Superstorm Sandy became more frequent, politicians continually failed to respond.

It's been well documented why climate change is, in scientific terms, a nasty bugger of a problem. While humans react most effectively to threats with a face (say bears or Al Qaeda), climate change is a faceless enemy. Its effects are delayed and distant, striking first at the world's least powerful people (such as farmers in Bangladesh, Sudan, and Syria). And we can't say that climate change caused any particular storm, drought, or heat wave, even though we know it makes these events more frequent and severe.

But the key reason climate change has eluded solutions is the enormous profitability of selling fossil fuels. ExxonMobil posted $44 billion in profit in 2012, more than any other American company. When Congress voted to approve the Keystone XL pipeline in 2012—a project that would link the carbon-intensive Canadian tar sands with global markets—it was quickly revealed that the "yes" votes had taken $42 million from the fossil fuel industry.

That kind of money, McKibben concluded, would always outcompete scientific white papers for the attention of politicians. This became fully clear to him in 2009, when a decidedly modest climate bill failed in Congress, and international climate negotiations crashed in Copenhagen. The problem wasn't a lack of sensible policy ideas. It was a lack of power.

"Environmentalists clearly weren't going to outspend the fossil fuel industry, so we'd need to find other currencies," McKibben writes in his new book, Oil and Honey: The Education of an Unlikely Activist. "Instead of money, passion; instead of money, numbers; instead of money, creativity." Oil and Honey tracks McKibben's transformation from a writer at home in the New England backwoods to an international leader in the fight against climate change. The book also tracks the growth of 350.org, an organization founded by McKibben and a handful of Middlebury College students. Through imaginative strategies, 350 has muscled itself into a presidential campaign, influenced White House policy, and persuaded a lot of people who don't wear tie-dye to join climate action demonstrations.

The bulk of Oil and Honey charts 350.org's work fighting the Keystone XL pipeline. A creature of the digital era, the group used the web to organize a worldwide day of demonstration in 2009, gathering images from thousands of simultaneous international demonstrations on its website. It inspired thousands to practice civil disobedience at the White House, forcing 1,253 arrests. Many of those arrested, including McKibben, spent nights in jail. Later, organizers surrounded the White House—either a house arrest for President Obama or an "O-shaped hug," as McKibben puts it. They held signs reminding the president of his lofty campaign promises on climate. On Capitol Hill, protestors wore referee shirts to "call foul" over dirty money in Congress.

The movement won a delay in the Keystone XL decision from the Obama administration, a victory that Washington energy insiders said 350 would never win. The group's founders seem to enjoy flouting conventional advice—messaging professionals warned them away from naming themselves after an obscure data point. They stuck with 350 anyway, since it works in multiple languages to highlight the unbendable dilemma at the heart of their work: 350 parts per million is the safe upper limit of carbon dioxide-equivalent in the atmosphere. (We're now above 400 ppm.)

Despite the success of the pipeline delay, the group knew it needed to do more than fight Whac-A-Mole style, fending off projects from fossil fuel companies. So it launched a divestment campaign, prompting college students, civic groups, and churches to demand divestment from dirty energy companies. The key, says McKibben, is to shift from defense to offense against oil and coal companies: "We need to take away their social license, turn them into pariahs, and make it clear that they're to the planet's safety what the tobacco industry is to our individual health."

If that sounds confrontational, it is. McKibben, long fond of describing himself as a Sunday school teacher and mild-mannered Methodist, admits he can no longer hide behind those monikers. "I've changed, and not always for the best," he writes.

To keep himself grounded during the whirlwind of campaigning, he apprenticed himself to a beekeeper near his Vermont home. Kirk Webster is a longtime beekeeper who developed a hive-management method that promised to turn real profits selling hives and honey. In search of a dedicated young apprentice, Webster settled on McKibben—middle-aged and perpetually on the road (who also purchases land for Webster in exchange for training).

The "honey" thread of the book is not as dramatic as "oil" (how could it be?), but it offers a glimpse of what climate solutions look like on the ground. Although America has petroleum-intensive corporate farms and inspiring boutique farms, says McKibben, it needs more mid-sized farms that could help sustain low-carbon local economies.

Oddly, the beekeeping interludes end up highlighting how little Oil and Honey is about solutions. That's not a criticism, though. Protest and visionary solutions both have their roles. They are a sort of yin and yang, balancing each other. Elsewhere, in his books Hope, Human and Wild and Deep Economy, McKibben has sketched visions of successful climate-resilient communities.

That's an essential task. Americans may sense that our auto-dependent economy is sputtering, but uniting for a low-carbon future requires something to work for and not just against. We catch glimpses of this in Vermont's civic-minded communities and in the walkable urbanism of cities like Portland, Oregon.

We have policy tools for building out these solutions too. Carbon-pricing methods (cap-and-trade or a carbon tax) essentially tell industries they can't dump waste for free—the same standard we expect for other pollutants. Solar power, embraced in Germany, now provides that northern country with 30 gigawatts of electricity—the equivalent of 30 nuclear plants. And home-weatherizing programs bring a trifecta of benefits—lower energy usage, lower heating and cooling costs for families, and work for tradespeople that can't be outsourced to Asia.

McKibben aims to contribute something more: a mass movement to hold leaders accountable. To date, 350's divestment campaign has more than 300 colleges, religious groups, and cities and states working to rid their endowments of fossil-fuel investments. Students have faced the same objections that opponents of South African apartheid faced: it won't work, it's impossible to disentangle complicated investment funds, leave this to grownups. The work continues.

The aim of divestment is to drain the vast financial reserves of fossil fuel companies, and the influence over politicians that comes with it. But it has a deeper goal too. For young people in particular, the campaign is a way of asserting control over what we think of as normal and what we think of as radical. We think of men in business suits as normal and protesters in tie-dye and dreadlocks as radical. The businessman's habits are normal, even if those habits involve pumping enough carbon dioxide into the skies to fuel heat waves, droughts, fires, and hurricanes. The protestor's sweaty fervor is radical, even if her purpose is to preserve something as benign as frosty January mornings, northern honeybees, and sugar maples resting dormant as they have for thousands of winters.

Perhaps, at this historical moment, our understanding of normal and radical is backward. The oil and coal executives altering the chemical composition of the atmosphere to make money are radical. The students marching to preserve the climate we've known for centuries are sensible—conservative, even.

Jonathan Hiskes is a writer at Bastyr University in Seattle. His reporting has appeared online at The Guardian, Mother Jones, Grist, Sustainable Industries, and Comment.

Further, does support of one's cause (fighting the Keystone Pipeline) rationalize use of any and all means? McKibben tweeted his support of this group protesting the Keystone Pipeline who were on the front lawn of the home of an oil and gas corporate executive in full KKK mode: http://www.tarsandsblockade.org/enbridge-home-demo/ Would Jesus wear a mask, carry burning torches and threaten violence and/or endorse those who do?

Jonathan Hiskes' review leads with the same type of discredited claims ("freak disasters such as Hurricane Irene and Superstorm Sandy became more frequent") as McKibben is famous for repeating. This review is rife with blatant errors. Ironically, those with any familiarity with Bill McKibben's public efforts can see the same pattern of factual errors and discredited claims. I am sure Bill McKibben has the best interests of our planet at heart. Sincerity is no excuse for repeating factual errors in defense of your cause. The fact that the earth has gone well beyond McKibben's "safe upper limit" for atmospheric CO2 concentrations of 350 ppm with no corresponding rise in global temperatures in 17 years should leave readers with questions about McKibben's climate change crusade. Hopefully, B and C will publish more reviews that approach their subject with at least an ounce of healthy, critical skepticism. Hiskes' article is more hagiography than review.