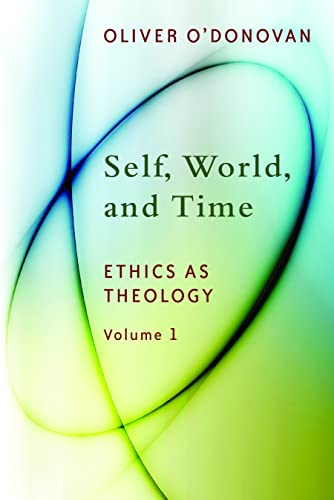 The Spirit of Moral Reasoning

We are beggars. That is truth." With his final words, Martin Luther returned to the fundamentally receptive, even needy, condition of humanity. Oliver O'Donovan commences the first volume of his Ethics as Theology similarly, echoing Paul's confession that "we are debtors" (Rom. 8:12). From the moment we awake to our moral experience, we find ourselves already caught up in a swirl of obligation and responsibility, having been given, and just so claimed by, ourselves, our world, and our time. Our moral awareness of this very givenness begins our ethical reflection, and it remains our ethical task, so that "wakefulness" names the carriage of those with eyes to see the world around them and their place in time.

We engage in moral reasoning long before it occurs to us that we are doing so, and so ethics needs no introduction. Instead, O'Donovan offers an induction, in hopes of clarifying what it is we are up to when we "think about" and "think toward" a fitting action. This strategy of induction is meant, in part, to pay due respect to the variety and vagaries of practical reasoning. By starting on the ground, and employing common-sense accounts of our moral engagement with the world, he exposes the conceptual poverty of premature abstraction.

Good ethical thinking triangulates, considering who we are as agents given time to act in this world. In his seminal Resurrection and Moral Order, O'Donovan made much of the im plications of the resurrection for the world, insisting that evangelical ethics requires attention to the restoration of the created order as it is and will be in Christ. He worried about the thinness of a Christocentric ethics, which "put Christ at the center without putting him at the center of the created world." In Self, World, and Time, O'Donovan reckons with the genuine newness of the resurrection and all it promises, focusing on the Pentecostal renewal of human agency. Consider this ethics as life in the Spirit.

But life in the Spirit hardly suggests an ...