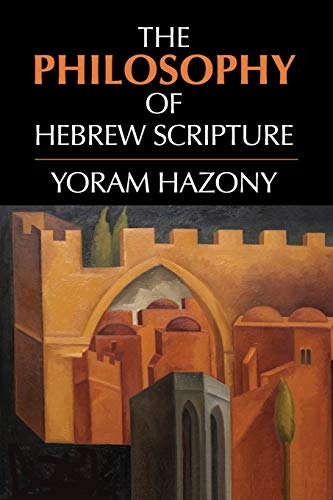 Re-Reading the Story of Cain and Abel

One of the pitfalls in using Cain and Abel (and perhaps in using other well-known biblical figures such as Abraham or Job) as types is the possibility of allowing the conclusion of the story to lead us into the development of predictable and oversimplified categories that miss the paradoxes and tensions contained in the original biblical story. A recent work that examines Cain and Abel as types but attempts to avoid this trap is The Philosophy of Hebrew Scripture by Yoram Hazony, president of the Herzl Institute in Jerusalem. I want to outline Hazony's discussion here for two reasons. First, Hazony's work is an important contribution to understanding the dynamic of the biblical story of Cain and Abel. Second, Hazony's argument is important not just for understanding Genesis 4 but as a radical critique of the generally accepted understanding of the entire Hebrew Bible. German theologian Paul Tillich became well known in the postwar period for arguing that the heart of Protestantism was "shaking the foundations" of traditional theology. Similarly, Hazony "shakes the foundations" of the accepted understanding by arguing that when it comes to the Hebrew Bible, things might not be as clear-cut as they appear to be. Hazony's major focus in this regard, of which his treatment of Cain and Abel is but a small piece, is to dismantle the popular view that the Hebrew Bible cannot be treated as a serious intellectual document because it is based on revelation and not on reason. He seeks to establish the role of reason in the Hebrew Bible through a discussion of its structure and by highlighting and illustrating the array of techniques it uses to make arguments of a general nature that can be judged by reason. That is the larger context for Hazony's treatment of Cain and Abel, which is my primary subject here.

In many engagements with Genesis 4, the focus is almost entirely on Cain, and any discussion of Abel is merely an afterthought. This is certainly the case when we come to the literary treatments of the biblical story as presented in Byron's Cain: A Mystery and John Steinbeck's monumental East of Eden. For both of these writers, Cain is the crucial figure. In Byron, he is treated as a Prometheus-like hero who establishes human freedom through his refusal to obey God's orders. In Steinbeck's novel, Cain is also central to establishing the principle of human freedom, which is built around Cain's discussion with God and the meaning of the Hebrew word "timshel," which is translated by the house-servant Lee as "mayest." Lee argues that God's use of the word "may," as opposed to "must," contains the kernel of contingency and openness found at the heart of human freedom. It is not unfair to say that for both Byron and Steinbeck, Abel is just a stage prop or part of the scenery, while the real action of the story swirls around Cain. This neglect of Abel is perhaps not surprising, and is even suggested in the biblical account in Genesis 4 by Abel's name, which is related to the Hebrew for "vapor" and "puff of air" (according to translator Robert Alter) and signifies "something transitory" (according to translator Everett Fox).

Given the general treatment of the story, which emphasizes the relative importance of Cain and the relative unimportance of Abel, it is therefore somewhat surprising that the first mention of this story in Hazony's work refers to Abel and that Cain is not mentioned at all. In an overview of his entire book, Hazony writes, "The Bible is often said to advocate an ethics of obedience. But … this view involves a serious misreading of Hebrew Scripture." The figures most celebrated in the Hebrew Bible, Hazony argues, "are esteemed for their dissent and disobedience—a trait the biblical authors associate with the free life of the shepherd, as opposed to the life of the pious submission represented by the figure of the farmer." In a way, Hazony sets out to turn the tables on Byron's understanding; for Hazony, Abel (as the type of the shepherd) will represent dissidence and disobedience, while Cain (as the type of the farmer) will represent conformity and submission.

The first line of resistance of shepherd dissidence is against corrupt human institutions, but it goes beyond this. Hazony writes, "Abel, Abraham, Jacob, Moses, Aaron, and other biblical figures are at times portrayed as resisting not only man, but God himself." Note the importance Hazony attributes to Abel, placing him first in this list of biblical heroes. He concludes, "The biblical narrative endorses … an outsider's ethics, which encourages a critique even of things that appear to be decreed by God in the name of what is genuinely beneficial to man." From this biblical perspective, Hazony continues, "what is genuinely beneficial to man is that which will ultimately find favor in God's eyes," even if the idea did not originate with God and even if it was in opposition to God's original plan.

Perhaps as surprising as Hazony's emphasis on Abel is his characterization of Cain. Hazony's introduction of Cain occurs when he places Cain's story within the broader sweep of biblical history; he argues that it "is very uncertain … that we can really understand the story of Cain, a farmer, murdering his brother Abel, who is a shepherd, if we do not recognize that this first act of violence between farmers and shepherds is a premonition of the violence between farmers and shepherds that appears in the later story of Abraham, and then again in the story of Moses, and yet again in the story of David."

As already noted, Hazony argues that Cain and Abel are presented as distinct theoretical types. Cain is a farmer "who represents tradition-bound and idolatrous societies such as Egypt and Babylonia" and "whose highest value is obedience." Abel is a shepherd "who stands for the spirit of freedom in search of that which is the true good." Abel represents the individual and the society "that is willing to forsake the might and riches of the great civilizations for the sake of personal freedom and the hope of something higher."

Hazony situates the story of Cain and Abel in its biblical context. Cain and Abel are born to Eve after she and Adam have sinned and been expelled from the Garden of Eden. In Genesis 3, God says to Adam, "Cursed is the ground due to you, and in sorrow shall you eat of it all the days of your life. Thorns and thistles shall it give forth for you, but you will eat the grasses of the field. By the sweat of your brow will you eat bread, until you return to the ground from which you were taken." God then sends them out of the garden "to work the ground from which he had been taken." This passage emphasizes the "bitterness of the farming life" and is made even stronger by the words used to describe Adam's fate. According to Hazony, the Hebrew term usually translated "till" or "work" the soil also means "serve." Thus, "God has in fact punished man by sending him 'to serve the ground'—to become the servant and slave of the earth itself."

In Genesis 4, we turn immediately to the story of Cain and Abel. The tale is told concisely: "Abel became a keeper of sheep, and Cain became a tiller of the soil. In the course of time, Cain brought an offering to the Lord from the fruit of the soil; and Abel, for his part, brought the choicest of the firstlings of his flock. The Lord paid heed to Abel and his offering, but to Cain and his offering He paid no heed." Hazony makes a couple of points concerning Cain that are significantly different from the popular understanding. First, "The text emphasizes that the idea of making a sacrifice to God is Cain's. It is Cain who inclines toward piety, and thinks to take some of his meager supply of food, which he has scraped from the soil, and sacrifice it to God in gratitude." Second, as a tiller of the soil Cain is following the instructions God had given to Adam. Hazony writes, "He works the ground just as God had told his father to do. He submits to God's will, and even, amid the curse and the hardship, finds it in his heart to be grateful to God for what he has."

Hazony's account of Abel is also different from the standard view. First, Abel merely follows Cain's example in making a sacrifice. There is no suggestion that his offering is superior to his brother's. Second, while Cain has followed in his father's career and tilled the soil in accordance with God's instructions, in becoming a shepherd "Abel has … found a way to escape the curse upon the soil." Hazony maintains that the biblical text emphasizes "the fact that this is about what Abel wants, first and foremost, rather than about what God wants." So the pious and hard-working Cain's sacrifice is rejected while the sacrifice of the self-indulgent Abel is accepted. How can this be brought into an understandable framework?

Hazony argues that the story is constructed so as to present readers with a stark choice concerning the best way of life: "Each archetype represents a way of life and an approach to living as a human being, to ethics." First is the life of the farmer as portrayed in Cain. "Cain has piously accepted the curse of the soil … as unchallengeable. His response is to submit, as had his father before him … . In the eyes of the biblical author, Cain represents the life of the farmer, a life of pious submission, obeying in gratitude the custom that has been handed down, which alone provides bread so that man may live."

Next is the life of the shepherd. "Abel takes the curse of the soil as a fact, but not as one that possesses any intrinsic merit, so that it should command his allegiance. The fact that God decreed it, and that his father had submitted to it, does not make it good. His response is the opposite of submission: He resists with ingenuity and daring, risking the anger of man and God to secure improvement for himself and for his children. Abel represents the life of the shepherd, which is a life of dissent and initiative, whose aim is to find the good life for man, which is presumed to be God's true will."

While God said nothing about shepherding when he ejected Adam and Eve from Eden, it develops that shepherding does fit within God's plans. What God really wants, according to Hazony, is "an improvement in man's station, a greater goodness which comes of man's own unsolicited efforts." Hazony concludes, "God accepts the offering of a man who seeks to improve things, to make them good of himself and his own initiative. This is what God finds in Abel, and the reason he accepts his sacrifice." (I note in passing a point that Hazony does not make—this discussion of man's improvement of his situation sounds much like Locke's account of the divine origins of property in his chapter on property in the Second Treatise.)

Hazony concludes with a fascinating appendix titled "What Is 'Reason'? Some Preliminary Remarks." Here, having rejected the traditional distinction between reason and revelation, he draws on the Reformed philosophers Nicholas Wolterstorff and Alvin Plantinga. Their perhaps unexpected appearance should serve as a hint to readers whose understanding of Scripture differs sharply from Hazony's in some respects that they can nonetheless profit from time spent with this book.

Steven D. Ealy is a senior fellow at the Liberty Fund.