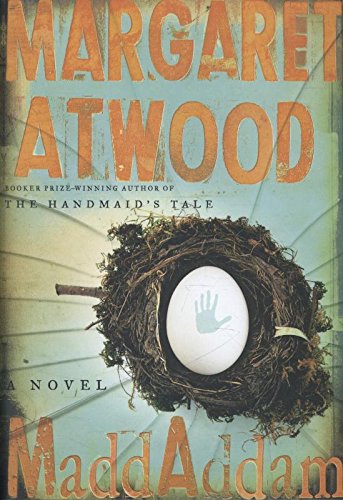 Writers of speculative fiction are forever getting called out for their failures. The most typical complaint goes something like this: "in the interest of developing her critique of _____ (fill in with any specific social ill), the writer forgets that a novel is composed of compelling characters and an interesting story. This book gives us neither."

This complaint was often made about Oryx and Crake, the first novel in Margaret Atwood's now-completed trilogy. Sven Birkets, though he enjoyed the novel, complained in The New York Times Book Review that "we can take in only so many confected scenarios of future life before we crave a complexity of character commensurate with the intelligence of the plot or the confident excellence of the writing." For my part, I thought these readings were unfair because Atwood succeeded in something arguably more difficult to achieve, namely, dramatic social satire. In satire, the believability of the characters and the story itself are necessarily subservient to the scenario. What the writer wants the reader to see is the world itself, what it is, what it has become, and, in the case of dystopic satires, what it will become if we are not careful.

Sometimes it does not do to listen to one's critics. With MaddAddam (as with the second novel in the trilogy, The Year of the Flood), Atwood might have overcorrected. In her efforts to give us new characters and more stories about the plague's survivors, Atwood forfeits the satirical edginess of Oryx and Crake. In that novel she powerfully revealed how our present, grotesque choices are building a near future in which someone like Crake could move and work and dream dreams of perfection. It told the truth via exaggeration: one man's ideal perfection is another man's actual destruction. When MaddAddam returns to Crake's story and the forces that created him, the novel shines. The rest of it is simply a romp—albeit a really fun romp.

Atwood has always had a gift for moving seamlessly back and forth through time. The bulk of this novel follows the character Toby, who is one of the few human survivors of the "Waterless Flood," the plague that Crake had released into the world's population in order to "reboot" with a new breed of semi-humans, the Crakers. Through Toby's memories we learn more about a religious organization called "God's Gardeners," who had anticipated such an event. Readers go back in time with her to the years just before the flood, in which the Gardeners saved her from a Painballer predator and taught her their earth-loving ways. We learn all about the organization, including the fact that Adam one (the first leader) had been involved with Crake in his early efforts to thwart the conglomerate of Bio Corporations who spread diseases through vitamins they sold in order to later sell their cure. Oddly, though the Gardeners are central to the last two novels, Atwood does not give them much of a pulse. We cannot love them because their religion is little more than banal nature worship. We cannot mock them because they, at least, have the tools necessary to survive the Flood. We cannot even blame them for the end of the world because they didn't really cause it. In short, Atwood seems to be ambivalent about the Gardeners, and satire does not work well with ambivalence.

Though the Gardeners storyline is a bit dull, we do, at least, learn a little bit more about Crake. Zeb, one of the Gardeners who infiltrated the HethWyzer compound, knew Crake as a child, when he was still called Glenn. Through Zeb we learn that Glenn's parents had little time to spend with him, and that "nobody ever touched Glenn. He somehow arranged it that way: he'd erected an invisible no-fly zone around himself." Glenn's parents leave him to his own experiments, which he conducts with no moral guidance. The scenes here are chilling. Glenn tells Zeb about his father's research on a tick whose bite causes a strong allergic reaction to red meat. Their exchange is vintage Atwood:

"So," said Zeb, "a tick drools into you and then you can't have steak any more without bursting out in hives and suffocating to death?"

"Bright side," said Glenn. He was going through a phase: he'd say "bright side," and then add some gruesome sidebar. "Bright side, if they could spread it through the population—those tick saliva proteins embedded in, say, the common aspirin—then everyone would be allergic to red meat, which has a huge carbon footprint and causes the depletion of forests, because they're cleared for cattle grazing; and then … "

"Not my idea of a bright side," said Zeb.

Zeb deflates Glenn's—that is, Crake's—hubris a bit here by arguing that the human species has evolved to eat meat, which is why the allergy is so rare to begin with. Crake grants the point to Zeb, but the reader knows that the larger moral issue goes untouched, namely, why Crake thinks he has the right to unilaterally decide how to name and solve our ecological problems. And this is, of course, exactly how he decides to obliterate people and replace them with his new, supposedly superior species.

What was so brilliant in Oryx and Crake was Atwood's revelation of a world—which turns out to be our world—that could create someone like Crake in the first place. We saw his childhood spent online, where he switched back and forth between watching live executions and kiddie porn without a single scruple. We saw him shuttled into the highly celebrated and heavily funded Watson-Crick Institute, where no research dollars are wasted on the humanities, like they do in the shabby Martha Graham Academy. The story was as much about the disintegration of the Western world's moral core through the disintegration of the arts as it was about anything. MaddAddam, though it does begin and end with a tribute to the power of storytelling, has little of this critique. Neither does it have any evidence of the Gardeners either challenging Crake's views or actually turning out to be responsible for them. Instead, the Gardeners seem to have had little impact on Crake for good or ill, and in the end we have no details about why or how Crake betrayed the organization by making them help him arrange for world obliteration.

In spite of these shortcomings, Atwood fans should rejoice that much of the imaginative fun of the first two novels continues here. The novel is bright, colorfully off-color, and funny. The world of biotech is, after all, an ever-evolving grotesque menagerie, and Atwood never lets us forget it. We see sheep called Mo'Hairs, bioengineered to grow human hair; large pigs (Pigoons) designed to grow human organs; and creatures designed to show that we could engineer a new Eden, the Liobams. A lot of the humor rises up when we get to know the Crakers, who are just coming into their own as a species, complete with all the foibles of the innocent. The novel also contains some interesting reflections on the inevitability of writing and storytelling among human (or nearly human) creatures. Although Crake had tried to engineer any need for the arts out of them, they are fundamentally myth-making beings who require explanatory stories. Toby teaches Blackbeard, one of the Crakers, how to write, and it is his voice we hear at the end of the novel. Through their need to process the events of their own creation, we become aware of the power of the storyteller, of the one who selects and arranges the material that will be handed down to the next generation. Toby's voice starts the novel: "In the beginning, you lived inside the Egg. That is where Crake made you." And Blackbeard's voice ends it. Although he isn't sure how Toby died, he tells us that the story he likes best is that she took the form of a bear in order to join Zeb: "That is the best answer, because it is the happiest; and I have written it down. I have written down the other answers too. But I made them in smaller writing."

Atwood has always been fascinated by the myth-making power of the human imagination. Fiction does not create the world, but it does create and re-create how we inhabit it. Even if most of what we recognize were lost, humankind would continue as homo symbolicus, transforming mysteries into things we can understand. If we destroy most people in the world because of a failure of our imagination, the human imagination, at least, will remain to rebuild us. As Atwood explained in her volume on sci-fi, In Other Worlds, "if you are a question-asking being—which Homo sapiens is—then sooner or later the creative part of the brain is going to come up with a point of origin and an ultimate destination, even if it's the cyclic destruction and re-creation of the universe."

Christina Bieber Lake is Clyde S. Kilby professor of English at Wheaton College and author of Prophets of the Posthuman: American Fiction, Biotechnology, and the Ethics of Personhood, just published by the University of Notre Dame Press.