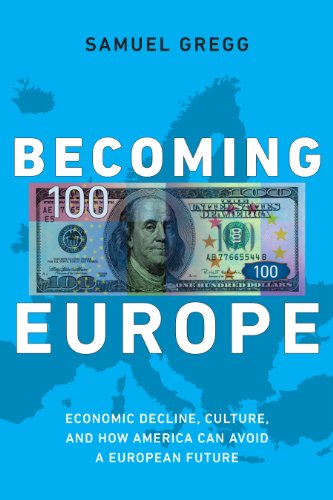 America presently faces a choice between a form of "cuddle capitalism"—what others consider creeping socialism, the therapeutic-nanny state—and a more dynamic market economy, rooted in liberty with limited government. The thesis of Samuel Gregg's timely book is that we are embarked down the first of these paths and that America is actually becoming more and more Europeanized—to our detriment. Gregg, the Acton Institute's director of research, analyzes this predicament through an economic lens. He is at his best exploring and refining the medium he calls "economic culture": that is, "the value commitments, attitudes, rules, and institutions that shape and characterize economic life in a given society."

Will Americans remain more individualistic than their European counterparts, or will they succumb to increased state action? Will the welfare state continue to grow at any and all cost, or will it have to be dialed back and reigned in—as a result of bloat and financial distress? Will entrepreneurship vanish in America, as it has, more or less, in Europe? And what will be the moral and political costs of what Gregg describes as "reduced freedoms"?

Gregg emphasizes the interplay in the economy between values, the institutions embodying those beliefs, and the incentive structures they create, as well as the forces they set in motion. Finding Europe's longstanding attachment to guilds and corporatist values rooted in mercantilism, he shows how the European Social Model evolved. This Keynesian model sought government management of the economy to promote full employment and "to preserve the market from its own inherent instabilities."

The result, made plain in today's European Union, has been vast bureaucracy, the end of charity, and closer political union. The founders of this economic strategy in trade liberalization always saw it that way. But with high levels of taxation and public spending have come adverse effects on growth, employment, and fiscal ...