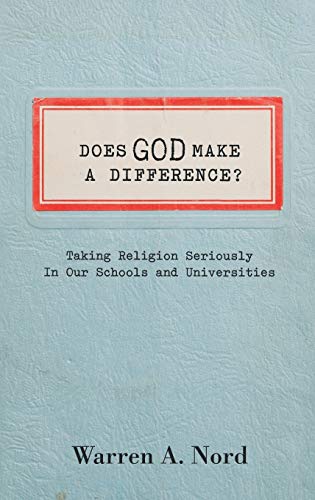 The Scandal of Secular Indoctrination

This is a guest column by Perry L. Glanzer, who is a professor in the School of Education and the Institute for the Study of Religion at Baylor University.

While talking with Warren Nord at a conference in the late-1990s, I asked for his opinion of George Marsden's The Outrageous Idea of Christian Scholarship. He told me the book was not outrageous enough. Although Nord passed away in June 2010, his last book, Does God Make a Difference? Taking Religion Seriously in Our Schools and Universities (Oxford Univ. Press, 2010), fortunately gives us a clear idea of how he believed the integration of the two might be made more outrageous. (His two previous books were Religion and American Education: Resolving a National Dilemma and Taking Religion Seriously Across the Curriculum—coauthored with Charles Haynes.)

In Does God Make a Difference? Nord contends that integrating religion and education should be normative in liberal education. What proves scandalous is that "with regard to religion American education is superficial, illiberal, and unconstitutional." To make his case Nord presents a three-part argument.

First, Nord points out the curious fact that, although religion serves as a live intellectual option for the majority of Americans, and relates to numerous important questions in every discipline, it receives little attention in America's educational system. To prove this point, he undertook the heroic task of analyzing pages upon pages of K-12 educational standards and textbooks.

He hardly found a smidgen of religion. In history texts, religion largely disappears after the 18th century. When religion was mentioned at all, it was usually in connection with political conflicts (e.g., the Iranian Revolution, the partition of India, 9/11, and Al Qaeda). Authors routinely missed chances for positive inclusion. For instance, they credited Martin Luther King's views on nonviolence to Thoreau and Gandhi and said nothing about his Christian theology or that fact that he was ...