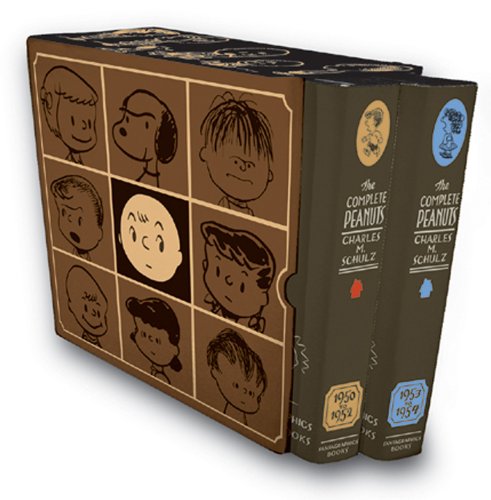 First things first: The Complete Peanuts is not yet complete. This ambitious project of reprinting fifty years' worth of daily strips—some never before reprinted, some "lost" in archived newspapers until now—began in 2004, with four years' worth of strips published in two volumes every year, and it will conclude only in 2016. The companion volumes of Peanuts Every Sunday, beginning publication this year, will show the Sunday strips in their full and carefully imitated original newspaper color, since all the strips in the The Complete Peanuts are in black and white. Whether you are a Peanuts scholar or merely a passionate fan, it's a dream come true. No more frustrations at the non-sequiturs caused by other less complete collections' random deletion of key strips in a sequence. Now you've got the whole genetic development of what is quite possibly the 20th century's greatest comic strip (only Krazy Kat and Calvin & Hobbes offer any competition to that claim).

The earliest strips from the 1950s are the most startling. Peanuts has always been famously spare compared to the visual bombast of adventure strips like Terry and the Pirates or superhero comics. But its first years were even more minimalistic than the now-standardized version we all know so well. Charlie Brown's head is the size and shape of a watermelon, Snoopy is a sleek and lean little puppy. Their earliest companions are neither the famous van Pelt siblings nor the athletic Peppermint Patty (who doesn't debut until the mid-60s, with her four-eyed friend Marcie following in the '70s after a false start as a little camper named Clara) but only the boyishly bland Shermy and mean-spirited Patty, who in turn by the early '60s are all but phased out. Schroeder, Lucy, and Linus enter the strip as babies and only finish growing up to their final age of eight about twenty years later. Woodstock has countless taller and thinner bird predecessors before he finally stakes his claim as Snoopy's best friend a year or so after the eponymous concert.

Not long after the strip's debut, the landscape and characters took on their more familiar contours—I personally find the look from about 1958 to 1966 most appealing—and the retrospective pleasure for the reader comes in finding the firsts: the first mention of Beethoven and the Little Red-Haired Girl, the first attempt to cure Linus of his blanket habit, the first abortive kite flight, the first time Snoopy imagines himself as something else (a rhino, in 1955) and so launches himself into a thousand different personae including, most famously, the World War I flying ace. The suburban Minnesota of Schulz's upbringing is evident here, too: outside there are wide lawns, low-slung houses with tidy vinyl siding, sporadic birch trees, sprinklers and sandboxes; inside there are hyper-modern chairs and lamps, geometric-print drapes, diminutive radios and fat wooden TV sets, and the kind of toys children had before plastic. And the children's lives are consumed by the passions of mid-century American suburbia: Davy Crockett, ice cream cones, chocolate creams (but no coconut, please), snowmen, baseball, mud pies, and jump ropes. Over the years these give way to the more sophisticated pleasures—and burdens—of marshmallow sundaes, chocolate chip cookies, root beer, peanut butter sandwiches, thank-you notes, summer camp, the doctor's office, and school (including one building that, shockingly enough, commits suicide).

The sheer littleness of the Peanuts characters is the source of many of the gags, both verbal and visual. A longstanding source of humor in Peanuts is putting big words in little mouths: in 1961 they talked about higher criticism, syndicated medical columns, communism, and mass communication; by 1985, they were talking about branch managers, satellite dishes, frequent flyer miles, and the private sector. Visually, the early strips show Linus entrapping himself inside Tinker Toys and Lucy unable to lift her tennis racket. That was why, Schulz always said, there were never any adults in Peanuts (a syndicate-inflicted name he always hated for its dismissive attitude toward the subject matter): they just wouldn't fit in this kid's-eyed view of the world.

In time, of course, the parental void became a force in its own right—manifested most disturbingly in the feature film A Boy Named Charlie Brown, which must be the most depressing children's movie ever made. Snoopy plays the adult role as needed, as attorney or surveyor or rescuer, or the children are adults to each other, especially when in need of psychiatric help. Peppermint Patty, who has no mother, is the official latchkey kid of the strip, but really they all are. The general momlessness, perhaps reflective of Schulz's mother's death just before he got drafted, appears again and again in Woodstock's anxiety to find his mom and wish her a happy Mother's Day, but the poor little bird never manages to do so.