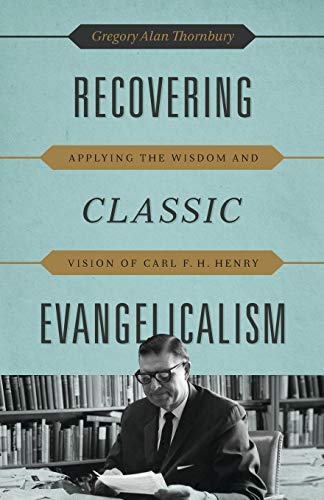 Thornbury has written his book for readers like me—evangelicals who have not actually read Henry's six-volume God, Revelation, and Authority, but who have been turned off by its reputation as a cool, rationalistic, and impressively dense opus that reduces the truth of the Bible to a set of logical propositions. This reputation is the opposite of Pascal's heart-cry, "Fire. / 'God of Abraham, God of Isaac, God of Jacob,' not of philosophers and scholars. / Certainty, certainty, heartfelt, joy, peace. / God of Jesus Christ. / God of Jesus Christ. / My God and your God."

Full disclosure: I value the post-Henry evangelical theologies that emphasize the narrative nature of truth and that highlight the dynamic and dramatic quality of the biblical revelation and the church's reflection on it. I count as friends some of the key narrative thinkers and postfoundationalists that are the targets of Thornbury's complaint.

Fortunately, Thornbury is not out for blood. His project is positive: to rehabilitate the philosophical, theological, and ethical work of Christianity Today's first editor. Thornbury's complaint about John Franke and Stanley Grenz is not that they have got things all wrong, but that by dismissing the importance of epistemological foundations, they have created systems that are too weak to stand the test of time. However, the currently pre-eminent Kevin Vanhoozer wins Thornbury's guarded approval: his 12-page critique trumpets Vanhoozer's "brilliance" as much as it frets over the possibility that his foundations are not entirely trustworthy.

Thornbury apparently assumes that evangelical theology must be constructed according to an academic equivalent to the building ...