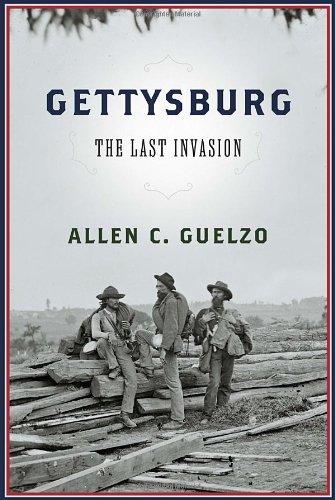 Until recently, Mitchell Burford Salter had been largely lost to history. His 90-year-old grandson has rarely talked of him. His great-grandson never knew the man or his story. The name wasn't familiar when he heard it, but he agrees that the sole extant photo of the one-armed man as an adult looks remarkably similar to his youngest brother.

Some of the men whom Salter met 150 years ago in the fields and hills of southeastern Pennsylvania outside Gettysburg have been better remembered, at least among the ranks of amateur and professional historians of the Civil War. Joshua Lawrence Chamberlain, the officer lionized in Michael Shaara's Killer Angels and played in the movie adaptation by Jeff Daniels, has been credited for ordering the desperate counter-attack that saved the United States. Strong Vincent at least boasts a marker on the rocky slopes of Little Round Top, small thanks from a grateful nation for giving his life to defend his home state from cocksure Southern invaders. Both officers receive due credit in the definitive new account of Gettysburg by Allen C. Guelzo, one of the era's most renowned historians.

But even Vincent and Chamberlain are never far from disappearing into the same fog of history that had enveloped Salter. When Gettysburg National Military Park commemorated the 150-year anniversary this summer, President Obama did not visit. Neither did Vice President Biden. National television programs stayed away. Since sesquicentennial events for the Civil War began two years ago, we have seen no popular revival of interest such as what erupted in 1990 with Ken Burns' acclaimed miniseries. Still, passion for the subject hasn't altogether vanished: Guelzo's demanding scholarly account enjoyed a brief run on bestseller lists, and his book reminds us why we can't understand the ongoing but ever-tenuous American experiment unless we grapple with the events of July 1863.

Guelzo's Gettysburg: The Last Invasion is not the place to start if you have only passing acquaintance with George Gordon Meade, James Longstreet, John Buford, and the like. I made my first pilgrimage to Gettysburg when I was seven years old (shortly before Burns made Shelby Foote's voice famous and introduced the world to poor Sullivan Ballou). I have returned twice since then and read more than my share of battle accounts and Civil War overviews, including Guelzo's recent Fateful Lightning: A New History of the Civil War and Reconstruction. As an amateur student of the period, I felt while reading Guelzo that until now I hardly understood Gettysburg at all. That's a compliment, believe me. But you probably won't want to jump into such a full-dress version until you understand the broader context of the war, envision the terrain at Gettysburg, and become acquainted with the major players.

You also shouldn't dive into Guelzo's history if you're looking for a glamorized narrative of heroism and valor under fire. Yes, you will find in the detailed maze of regiment numbers and brigade commanders many such stories. You will marvel at the 1st Minnesota's suicidal charge into vastly superior numbers of Alabamians storming toward the Union center at Cemetery Ridge. You will observe Guelzo's admiration for certain standout generals: John Reynolds, who defied Meade and determined to make battle at Gettysburg, where he would perish; Otis Howard, "the Christian general" unpopular among his blasphemous peers but who understood the need to defend and hold the high ground; and especially Winfield Scott Hancock, who overcame his colleagues' disastrous errors and staved off Union collapse at the end of the second day. And even as you lament their cause, the soldiers of Virginia and North Carolina who marched with Gen. Pickett into their doom on the third day will make you gasp at what humans will do for the comrades on their right and left.

But mostly you will see Gettysburg as the generals and soldiers did: through the sulphurous haze of uncertainty. Guelzo peers into every long-standing controversy with hopes of finding light. Why didn't Dick Ewell press his advantage all the way to Culp's Hill and Cemetery Ridge during nightfall of the first day? Why didn't Longstreet begin his attack early in the next day? What could Dan Sickels have possibly been thinking by deploying his corps forward on the Emmitsburg Road instead of defending the line between Hancock's 2nd Corps and Little Round Top? Why didn't Meade heed President Lincoln and pursue the retreating Robert E. Lee and seek to end the war before he could escape back across the Potomac? Guelzo takes his best shot at answering all of these questions and many more. Neither one of the commanding generals, Meade and Lee, escapes the unforgiving scrutiny of hindsight.