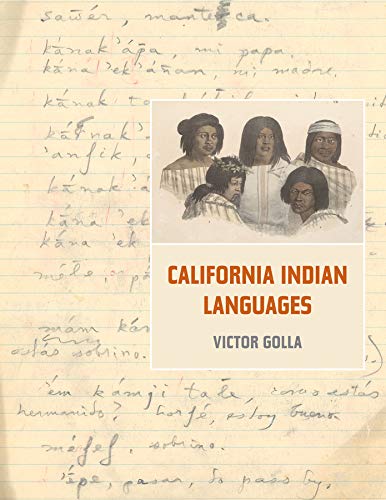 What we learn from California Indian languages.

When Europeans encountered what is today California, that area contained 78 different languages. Not "dialects" of some single "Indian tongue," or even just three or four, but 78 languages as mutually unintelligible as French, Greek, and Japanese.

Victor Golla's California Indian Languages is a lush and handy primer on what is known about all of these languages, but a volume like this is as much an elegy as a survey. Not a single name of any of these languages would ring a bell to laymen—Pomo? Miwok? Wiyot?—and this is partly because almost all of them will be extinct within another generation. As of 2010, for only a few dozen were there were fluent speakers alive, and most of them are elderly. European languages, especially English, intruded upon Native Americans' linguistic repertoire starting centuries ago, and eventually were often forced upon them on the pain of physical abuse in schools. Today, English is the everyday language for almost all Native Americans.

Once even a single generation grows up without living in a language, it is almost inevitable that no generation ever will again. The ability to learn a language well ossifies after the teen years, as most of us can attest from personal experience. If we do manage to wangle a certain ability in a language as adults, the chances are remote that we would use this second language with the spontaneous intimacy of parents and children at home. The generation of, say, Miwoks who only know a few words and expressions of their parents' native language—or enough to manage a very basic conversation but that's all—will not pass even this severely limited ability on to the next generation.

Yes, there are programs seeking to revivify these fascinating languages. Some groups have classes. In others, there are master-apprentice programs, in which elders teach younger people the ancestral language within a home setting. One reads about such efforts in the media rather frequently nowadays, in the wake of various books over the past twenty years calling attention to how many of the world's languages are on the brink of disappearing. By one estimate, only 600 of the current 6,000 will exist in a hundred years.

Golla's book, unintentionally, suggests that happenstance aspects of linguistic culture in indigenous California made the task of reviving these languages even harder than it might be otherwise. Ironically, one of the factors was something that many would find rather romantic in itself: Native Americans in California considered languages to be spiritually bound to the areas they were spoken in. This seemingly innocuous aspect of cosmology had a chain-reaction impact on the future of the languages.

First, in this world it was considered culturally incorrect to speak any but the local language when in its territory. This meant that those who traveled to another place—and few did, given this strong sense of local rootedness—made use of interpreters rather than learning the other language themselves. Hence California Native American languages were rarely learned by adults.

As it happens, when adults learn a language in large numbers and there is no written standard or educational system enshrining its original form, it becomes less complex. English lacks the three genders of its sister language German because large numbers of Vikings invaded and settled the island starting in the 8th century and married local women. They exposed children to their approximate Old English to such an extent that this kind of English became the norm. I am writing, then, in a language descended from "bad" Old English.

That this kind of thing happened so rarely in indigenous California had a secondary effect: the languages tend to be more complex than anything an English speaker would imagine. Taking lessons in Yokuts, spoken in the southern Central Valley, you would learn that the past tense ending is -ish. So: pichiw is "grab," and pichiw-ish is "grabbed." But it turns out that grab is unusual in Yokuts: not just some but most Yokuts verbs are irregular. Add -ish to ushu "steal," and it morphs into osh-shu, with a new o instead of u and a double sh. Add -ish to toyokh "to doctor" and it's tuyikh-shi. You have to know precisely how each verb gets deformed—and that's just two verbs.

In Salinan over on the coast, there's no regular way to make a plural: every noun resembles the handful in English like men and geese. House is tam, houses: temhal. One dog: khuch. More of them: khosten—and this is how it is for all nouns. All of the California languages are like this in various ways. A grammatical description of any one of them is, in its way, as awesome as a Gothic cathedral.