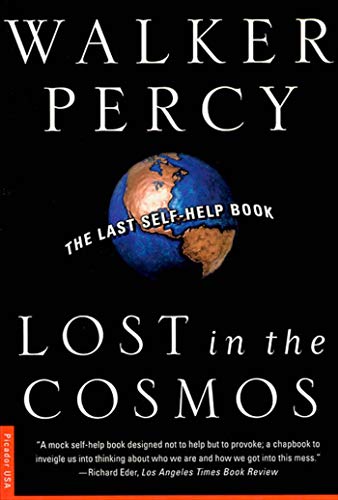 Percy and Sagan in the Cosmos

On the 30th anniversary of "The Last Self-Help Book."

It is February of 1969 and a new television series is beginning on BBC2. The first images—they are in color, which is noteworthy—are of Michaelangelo's David, Botticelli's Primavera (in closeup), a series of beautiful buildings both ancient and modern. A noble and passionate organ piece by Bach plays. Finally one word appears on the screen: "CIVILISATION"—followed soon by this: "A Personal View by Kenneth Clark." In weekly episodes that last into May, the learned and patrician Clark, one of the great art historians of his age, guides his viewers through the history of European art from the fall of Rome to the rise of modernist architecture in the New World. In the first sentence he speaks, Clark quotes John Ruskin's view that it is through the history of art that we can best understand a given civilization's core commitments and true achievements; for the following 13 hours he makes his viewers believe that Ruskin was right.

The series was extraordinarily successful, and the primary lesson that producers at the BBC learned from it was that the "personal view" was key: the series worked not because it provided many beautiful images from the history of Western art—though it did that, and filmed on 35mm stock as well, which is why modern DVDs of the show look so good—but because viewers loved being guided by Clark. His distinctive sensibilities, his willingness to pronounce his own judgments and to own them as just that, personal, captured viewers' imagination.

So the BBC decided to do it again—but on a larger scale. If the history of Western art made a good story, why shouldn't the whole history of humanity make a better one—if you could find the right teller? And thus was born, in 1973, The Ascent of Man, a primer on "cultural evolution" hosted by the mathematician, historian of science, and polymath Jacob Bronowski. This series opens not with Bach but with Bronowski's own reedy voice—"Man is a singular creature"—but when the title sequence arrives, it announces its debt to Civilisation: "THE ASCENT OF MAN," the first screen reads, followed by "A Personal View by J. Bronowski."

The Ascent of Man was produced by Adrian Malone, and one of its directors was David Kennard. A few years later they moved to the United States, where they decided that they would look for a subject even larger than the long history of human evolution: Why not the story of the universe itself? And so in 1981 their new PBS series was launched, once more in the 13 parts that Clark had apparently made canonical. It begins with what appears to be the camera moving through a field of stars—a technique pioneered by Douglas Trumbull in the later, phantasmagorical scenes of Stanley Kubrick's 2001: A Space Odyssey—as ethereal music by Vangelis plays. Then the title: "COSMOS." Then: "By Carl Sagan." And on a third screen: "A Personal Voyage."

We see huge ocean waves breaking, and then a man standing on a grassy cliffed coast with a heavy sea off to the right. (Perhaps in Newfoundland?) He begins to speak, not in the polished Oxbridge tones of Clark and Bronowski but in an oddly modulated voice hinting at Sagan's native Brooklyn: "The Cosmos is all that is or ever was or ever will be. Our feeblest contemplations of the Cosmos stir us—there is a tingling in the spine, a catch in the voice, a faint sensation, as if from a distant memory, of falling from a height. We know we are approaching the greatest of mysteries."

Everything here—the music, the images, the quietly impassioned tones of Sagan—reinforce this core idea: "We know we are approaching the greatest of mysteries." Throughout the series Sagan repeats two key messages. The first is that science is our only true guide to the mysteries we approach:

There is no other species on Earth that does science. It is, so far, an entirely human invention, evolved by natural selection in the cerebral cortex for one simple reason: it works. It is not perfect. It can be misused. It is only a tool. But it is by far the best tool we have, self-correcting, ongoing, applicable to everything.

The second message emerges from the Cold War politics of the time: instead of approaching the Cosmos with reverence, "we are directed far more toward war." We endanger ourselves and our planet because we fail to realize that "present global culture is a kind of arrogant newcomer. It arrives on the planetary stage following four and a half billion years of other acts, and after looking around for a few thousand years declares itself in possession of eternal truths." We must unlearn that arrogance; we must cultivate awe in the face of the immensity of the Cosmos. This is our only hope.