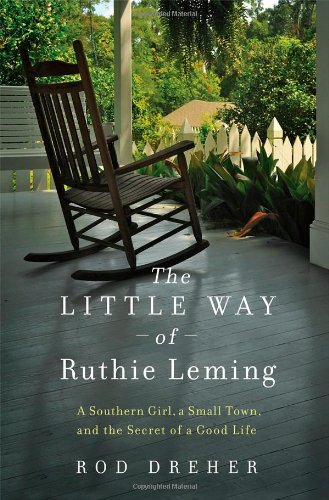 The Little Way of Ruthie Leming: A Southern Girl, a Small Town, and the Secret of a Good Life
Rod Dreher
Grand Central Publishing, 2013
288 pp., 25.99

"Home is where you hang your head," my clever friend George used to say. Many of us know what it's like to have a vexed relationship with home—particularly if we are bookish types, and grew up among people who didn't understand that at all.

George fits that familiar pattern, though his story is more extreme than most. He grew up in Ulmer, S.C., which in the 2000 census boasted a population of 102. I met him in college—not any élite college, but just the University of South Carolina, in Columbia. Compared to Ulmer, it might have been Paris. And George was the most intelligent person I've ever met. For a paper on a novelist with a paradoxical bent, George wrote 100 pages (on an old-fashioned typewriter); on the 50th page, he began systematically refuting all his previous assertions.

Back home in Ulmer, George sold peaches from a roadside stand. The consensus was, "He's got school smarts, but that boy's got no common sense."

In The Little Way of Ruthie Leming, Rod Dreher tells a similar story. He grew up in a rural stretch an hour north of Baton Rouge, near St. Francisville, Louisiana. It wasn't a good fit. His Paw was an avid outdoorsman, but "[t]he last place I wanted to be on a wet, frozen Saturday morning was standing in the woods with a shotgun," Dreher writes. He'd rather be "in the warmth of the camp kitchen, drinking hot, sweet Community coffee, eating jelly cake, and listening to the crazy talk from Oliver 'Preacher' McNabb, the old black cook" who'd spent time in Angola for murder.

Rod's little sister Ruthie didn't agree. "She really did love all of it—especially the hunting. As soon as she was big enough to carry a shotgun, she did." Rod instead drank in the stories from his great-great aunts Hilda and Loisie, who had volunteered as nurses in World War I. He writes, "They caught the train at the bottom of the hill near their family home and didn't stop their journey until they arrived at the Red Cross canteen at Dijon, France." Time he spent ...