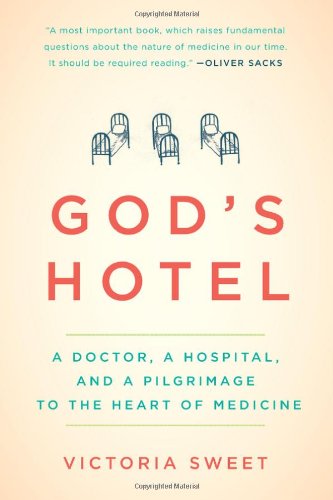 The efficiency of inefficiency.
July/August 2013

Victoria Sweet spent more than 20 years as a physician at San Francisco's Laguna Honda Hospital, tending to some of the city's sickest, poorest residents. The first thing to know about God's Hotel, her elegant account of her "journey to the heart of medicine" over those years, is her affection for her patients. She introduces each with a tender character sketch—we meet Mr. Essem through his "round young face, his round ears, and his round, attentive brown eyes" and Mr. Tom through his shy, childlike smile "with eyes crinkling down at the corners."

But there's another character Sweet is even more interested in understanding: the old hospital itself, a 19th-century estate planted on a hillside overlooking the Pacific. With its Romanesque turrets, arches, and open windows, Laguna Honda recalled the origins of the Western hospital—the medieval nuns and monks who cared for the sick poor as part of their religious duty. With vegetable gardens, occasional chickens wandering the wards, and the ability to take long-term patients discharged from the city's emergency care centers, the hospital also served as the last of the almshouses that once housed America's sick poor, often located on farms at the edges of towns.

Sweet follows these echoes back through time, tracking the development of Western medicine and uncovering surprisingly holistic origins. By braiding these historical searches with her time at Laguna Honda, she arrives at a compelling critique of modernized health care and a vision for transforming it.

We meet Sweet as she conducts her first autopsy after medical school, sorting through tissue and organs and finding she has no language for the something she feels should lie at the center of the body, "like what you find at the center of a baseball when you unroll it." She realizes she has landed in a profession from which "words like spiritus and animus had been banished."

That discovery leads her toward a doctorate in the history of medicine, studying Hildegard of Bingen, the 12th-century German mystic and theologian who was also an influential medical practitioner. Hildegard listened to and sat with patients before moving to treatment, which was typically focused on diet and herbs. Sweet delves into Hildegard's medical texts, brewing her medicinal beers and discovering that Hildegard's vision of health rests on the concept of viriditas, Latin for the green life-giving sap of plants:

I began to understand that the premodern system was based on the gardener's understanding of the world, and that Hildegard took a gardener's approach to the body, not a mechanic's or a computer programmer's. She did not focus down to the cellular level of the body; instead, she stood back from her patient and looked around.

A gardener, Sweet realizes, proceeds by attending to both plants and their environment, observing, tweaking, and waiting for results to unfold.

Alongside her studies, Sweet works in the admitting ward at Laguna Honda, treating patients picked up from the streets or discharged from the city's acute-care facilities. She helps patients unravel complex tangles of diagnoses, misdiagnoses, prescription drugs, bad habits, and sheer fatigue from their journeys. She reflects that Laguna Honda's most valuable offering is plentiful time—for long-term patients to recover, for doctors and nurses to build relationships with them, for drugs (illegal or misprescribed) to leave the body.

She tells the story of Klara Muller, a 78-year-old with a lilting Austrian accent struggling to recover from a routine hip replacement surgery. Mrs. Muller became delirious after the operation; diagnosed with Alzheimer's disease and diabetes, she was sent home for recovery. After some months, she arrived at Laguna Honda on antipsychotic medications, confused and unable to walk. Sweet puzzled over the situation, ordered an X-ray, and went upstairs to read it herself. Her patient, she found, had a dislocated hip—and not diabetes or Alzheimer's.

How did the problem go undiscovered for six months? Mrs. Muller received home visits from an aide, a physical therapist, a social worker, and a nurse. Each performed a narrow role, says Sweet, but it "wasn't anyone's responsibility to put it all together."

Recalling Hildegard's patience, Sweet responds to efficiency-minded health care with the concept of "slow medicine." Just as the slow food movement arose from a sense that nourishment is not a commodity that can be isolated from the process of a meal, slow medicine suggests that healing is a fundamentally relational endeavor. To heal is to become whole (both words come from the Old English hál), restoring connection between body and mind, between oneself and one's place in the family of things.

Sweet marvels at the old doctors who seemed to do little more than enter a patient's room, say hello, and watch her face and body as she spoke. They understood there was something mysterious and holy (another word derived from hál) in the mutual trust that arose between patient and healer.

Sweet's journey alone would provide a worthwhile memoir. What gives God's Hotel a dramatic arc, however, is the relentless determination of city-appointed efficiency consultants to turn Laguna Honda into a modernized hospital. They file report after report on the public hospital, forcing administrators to add layers of managers and thrusting more and more forms and training sessions at doctors and nurses, whose numbers are eventually cut. Sweet observes all this with candid skepticism.

The book's trickiest task lies in dramatizing a series of consultant reports. The administrative tedium threatens to come off as … administrative tedium. The cast of successive hospital leaders can be difficult to keep straight. But Sweet holds our attention by tying this narrative to her patient's stories and taking the economic arguments head on.

She notes that health economists seek to conserve precious doctor time while allowing abundant lab tests and drug prescriptions. They also trim the hospital's food budget down to a minimum, ignoring the central role diet plays in wellness. Sweet says they have things exactly wrong: It's the tests and drugs that are exorbitantly expensive—well-used doctor time is cheap by comparison. She tells the story of a patient who waited three months to be discharged because his Medicaid-covered shoes hadn't arrived. A fellow doctor met the patient, considered his medical duties, and drove to Wal-Mart to buy the man shoes, bucking bureaucratic protocol. "He must have saved the health-care system many thousands of dollars by buying those shoes, and yet [the consultants] would not have thought his action efficient," says Sweet.

She offers the paradox of "the efficiency of inefficiency" to explain why decades of medical cost-control efforts in the U.S. have failed. She tells of a head nurse who spends much of her time at work knitting blankets for each patient on her long-term recovery ward. A trained, well-paid professional knitting might seem like the height of waste, but Sweet argues those blankets send important cues. They signal that every other task on the floor has been completed, that details are important, and that comfort matters. Even when some of the patients aren't alert enough to notice, the blankets send a message to aides, doctors, ambulance workers, and family members visiting the ward.

"The secret in the care of the patient is in caring for the patient," says Sweet.

At the book's end, in 2010, the city closes the old Laguna Honda and moves patients to a new glass-and-steel facility next door, replete with cost-control technology. In response, Sweet designed an experiment that would compare the cost and effectiveness of a typical care unit with a "slow medicine" unit that would offer patients ample staff time, organic food, and plenty of sunlight. (She is seeking funding for the project.)

Sweet's key insight is that by defining efficiency too narrowly, health care's funders (i.e., all of us) end up paying much more. The question isn't whether to be frugal. The question is whether discharging patients too quickly is more "efficient" than giving them time for rest and healthy eating under attentive care. The same risk holds true with overly narrow view of the "cost" of public education, public infrastructure, public social aid, and so on. She doesn't belabor the point. Instead, she returns to the tension inherent in the limited resources that doctors and nurses face as they try to be agents of healing—the same tension that Hildegard and her fellow monastics understood.

The ultimate strength of God's Hotel lies in that paradoxical dual motion—inward toward the holy mystery of the healer-patient relationship, and outward toward a people's duty to care for those the Gospel of Matthew calls "the least of these."

Jonathan Hiskes writes about health at Bastyr University near Seattle. His reporting has appeared online at The Guardian, Mother Jones, Grist, Sustainable Industries, and elsewhere.