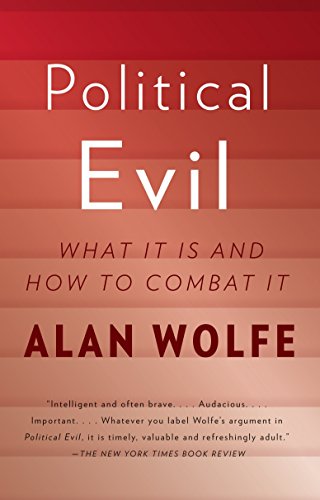 This is a guest column by Eric Miller, professor of American history at Geneva College and author most recently of Glimpses of Another Land: Spiritual Hopes, Political Longing (Cascade).

In Political Evil: What It Is and How to Combat It, Alan Wolfe addresses the ongoing crisis of Western democracies. Published in September 2011, marking the tenth anniversary of 9/11, his book is even more timely today, amid the debate over drone killings.

So what is "political evil" as Wolfe understands it? The term turns out to be considerably narrower in meaning than one might imagine, given the broad swath of reality the words "political" and "evil" usually cover. In this book Wolfe is not calling attention to, say, Nixonian varieties of evil: deceit, thievery, graft. Nor does the dull presence of a solipsistic citizenry qualify for him as political evil. No, Wolfe wants us to think of political evil as "the willful, malevolent, gratuitous death, destruction, and suffering inflicted upon innocent people by the leaders of movements and states in their strategic efforts to achieve realizable objectives."

Clearly Wolfe seeks to turn our attention to evil on a grand scale and, given the past two decades of world history, for obvious reasons. He centers the second half of the book on an astute and often illuminating discussion of terrorism, genocide, ethnic cleansing, and "counterevil"—the fighting of political evil with evil. But before he can do this he has to elaborate and defend his thesis on political evil.

Wolfe believes that Western democracies have bought into a long-cultivated assumption that evil in general is vast and prevalent—an error (so he sees it) largely traceable to St. Augustine and his many heirs, including the highly influential 20th-century political philosopher Hannah Arendt. For Wolfe, we may not be possessed by evil but we are, tragically, obsessed with it. "Evil," he contends, ...