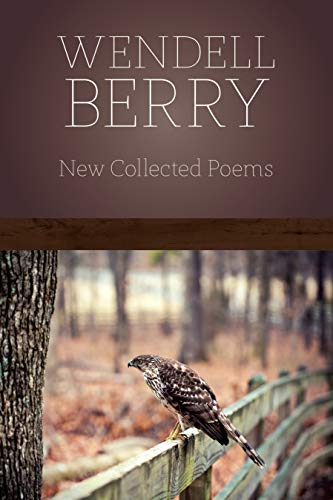 Thirty years separate Wendell Berry's Collected Poems (1982) and his New Collected Poems. Those intervening years saw the publication of new work in three additional volumes: Entries (1994), Given (2005), and Leavings (2010). New Collected Poems omits twenty or so poems from those three volumes plus all of the "Sabbath" poems. This means in all likelihood that the "Sabbath" poems will at some point appear under separate cover, as they did before in A Timbered Choir: The Sabbath Poems 1979-1997 (1998).

So we have nothing yet like the complete poems—for Berry, who will turn 80 next year, is still very much with us and hard at work. What we do have is an attractive compendium from a poet who has never written so much as a line for the anthologizers or the peripatetic professionals whose home is the cash bar wherever the national convention for tenured poets is being held. Berry's work is the careful artistry of someone firmly placed in this world, a man mindful of contingency and ardent for the minute particulars that mass culture would first obscure and then obliterate altogether.

And obliteration has long been the menace. A "divine man / is hanging from a tree" at the end of the poem "Air." This unrisen Jesus hangs because "another child / is burning" below. A fighter pilot has turned

This man, "proud and young," is yet another of those whom "we have taught / to be amused by horror" "in the work of death. Ahead of him / wait those made rich by fire."

"Air" is a poem that, at a time when only the bellicose are thought patriotic, may displease a certain kind of reader. But it is of a piece with the poetry that Berry has been writing for the last half-century. It calls to mind such poems from Openings (1968) as "Against the War in Vietnam" and "To a Siberian Woodsman" (1968) and, from Entries, their thematic reprisal in the 12-poem sequence "In Extremis: Poems about My Father."

But "Air" gestures in two other directions, both involving violence of a sort. One is the unending explosion that both causes and exacerbates the hypermobility that one of Berry's acolytes, Bill Kauffman, has called the undiagnosed malady of our time. It is a relentless disease that puts asunder what God has joined together: people and their places, mutually preserved, as in marriage, by long association, intimate knowledge, and fidelity. The value of the energy we get from oil, Berry has observed, unlike the value of the energy we get from the body (which is to say from the sun), is realized only in its being spent, never in its being replenished. It is useful the moment it blows up—and then it is gone forever. This violence, putatively controlled, is by now ubiquitous.

The other form of violence "Air" gestures toward is the kind we commit against ourselves by the abstract arrangements of which high-speed travel, especially flight, is an emblem. So when in "A Speech to the Garden Club of America" Berry writes, "I'm sorry for getting here / By a sustained explosion through the air, / Burning the world in fact to rise much higher / Than we should go," he intends—admitting complicity—to make plain that "burning the world to live in it is wrong" (we burn it "in our fit / Of temporary progress"). But he also reminds us that abstraction conduces to abuse, that we belong on the ground, that we should go "back to school, this time in gardens / That burn no hotter than the summer day." Not to do so is to live, as Berry says elsewhere, at the far end of a broken connection. And to live too far from what is broken is to live too far away to fix the break—or even to know that it is there.

"Air" may be advantageously held up alongside an earlier poem, "Below" (1980): "Above trees and rooftops / is the range of symbols" and "the pure / abstraction of travel by air." And, here below, "a spire holds / an up angel with trump and wings" who is "in his element." But the speaker, by contrast, "aspire[s] downward":

Flyers embrace
the air, and I am a man
who needs something to hug.
All dawns cross the horizon
and rise, from underfoot.

The speaker understands the angel's point: that not everything is here below. But he also understands that he's not an angel. The earth, not the sky, is the poet's element, his "stem / And true descent," as George Herbert put it long ago.

I bring these two poems into juxtaposition to make the point forthrightly: Berry's emphasis on the earth has as its context our ruinous inclination to live above the material conditions of life. These conditions are inescapable, and we must suffer them not as angels nor as beasts but as men and women. Good stewards do not live at several removes from the sources that sustain them; peaceable men do not fly over villages and annihilate them with an impunity made easy by distance. This is abstraction, and abstraction is always injurious to what Berry, forty years ago, called the one value: the life and health of the world. Thus it is that in one of the late Mad Farmer poems the speaker says:

Come into the life of the body, the one body
granted to you in all the history of time.
Come into the body's economy, its daily work,
and its replenishment at mealtimes and at night.

The hortatory address is a call to return, "to think again / of the care of flocks and herds, of gardens / and fields, of woodlots and forests and the uncut groves."

That so few of us tend flocks and herds and woodlots makes no difference, Berry says elsewhere, for we all farm, whether actually or by proxy, or else we don't eat. Not to "think again" of these good things and at least in some sense return to them is to be governed by abstraction and to usher in the abuse which now is our common condition.

But it would be a mistake to call Berry a "nature poet"—and probably an even greater mistake to call him "romantic." He never puts nature to use as mere symbol. In fact the paucity of simile and metaphor in his work is, oddly enough, one of its most interesting characteristics. (Those tropes are not entirely lacking, of course: "We live in time / as in hard rain, and have no shelter.") "I am to some extent a literalist," Berry writes in William Carlos Williams of Rutherford (2011). "I like plain-speaking in a poem, and if something can be said plainly I don't think it gains in artistic value by being said obscurely." And although I have used the word "speaker" here, Berry is a poet whose voice is never a means of misdirection. Even in the Mad Farmer poems, in which the poet does assume a persona, you never feel as if you are being deceived by the voice.

There is, I suppose, a stronger case for calling Berry a "religious" poet. "I come into the presence of still water," he writes in "The Peace of Wild Things," the biblical echo of which is no less clear than that in "In Extremis," where the poet's father "calls his sheep, who know his voice and come." But although Berry's language is often that of the Bible, we err, I think, in calling him "religious." He is, rather, a writer interested in religion and in whom the King James Bible resides deeply. But any designation more specific than that would, I expect, make him uncomfortable. A critic might get away with "sacramental," and the epithet would be fitting, but it wouldn't change the fact that Berry seems to prefer the back pew—mainly for its proximity to the door.

Not much can be said about Berry's prosody in a short review, but it is probably worth noting that, as for Williams, so for Berry the line and sentence bear equal import, the line for its music and the sentence for its sense. In the first poem cited above, for example, there's an unmistakable mellifluous quality to the line "homeward in the dark" equal to the tension that is realized only in the enjambment: "dark / heaven." "Dark," it turns out, isn't only a stressed syllable that accomplishes the line's cadence; it is an adjective rather than a noun. That it should qualify "heaven" is, among other things, grimly ironic.

In the aforementioned study of Williams, Berry distinguishes between poets who inhabit a career and those who inhabit a place. Williams perfected his craft in part by "long attending" to his place. He was "a man extraordinarily awake," a poet "trying to find a credible language," a language answerable and "native to its place."

Anyone familiar with Berry's antipathy toward the university—to him it is an institution populated by itinerant vandals and deracinated "literary industrialists" so self-serving they give careerists a bad name—will understand Berry's sympathy toward Williams, who practiced a "stewardly" rather than a "triumphal" art, an art of "local adaptation." Williams created a kind of poetry "subordinate to history, culture, and geography."

It hardly needs saying that Berry, too, has struggled—I had almost said "endeavored," but "struggled" is the better word—to understand his own artistry not as a context in itself but as part of a context, as work performed not from a career but from a place, whether the work be poetry, fiction, or fence-mending. For, as Berry has long insisted, it is everyone's vocation to be an artist: painter, poet, carpenter—it makes no difference. God is an artist, and we are made in his image. And, like Williams, Berry has written not from but toward a theory of art ("we are / either beginning or we are dead," Berry writes in "To Hayden Carruth"; "let us have / no careers, lest one day we be found dead in them"). If the poet wishes to write from anything at all, Berry implies, let him write from a place he knows well, loves well, and stays in. If he does so consciously he just might write poetry that has uses beyond padding the CV. Berry himself has given us nothing less than a poetry that lives up to the old Chaucerian standards of instruction and delight. New Collected Poems is a full harvest of both.