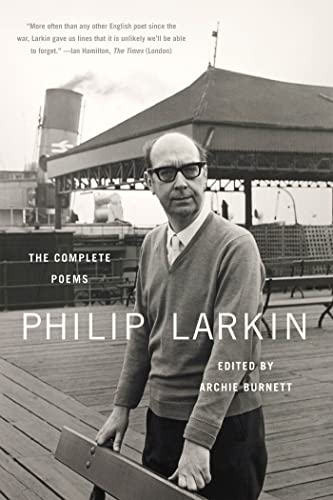 Philip Larkin died when I was 18 years old. At that time I had been reading his work for just over two years, collecting the slim Faber & Faber volumes and memorizing some of the shorter poems. Why a curmudgeonly, reclusive librarian living in Hull, England, and penning such misanthropic lines as "Man hands on misery to man. / It deepens like a coastal shelf. / Get out as early as you can, / And don't have any kids yourself" should have appealed to a teenager like myself, I can't really say. I loved, I guess, the music of his lines. And there was a certain compelling mystery to the way Larkin ended some of his more famous poems, such as "The Whitsun Weddings"

We slowed again,
And as the tightened brakes took hold, there swelled
A sense of falling, like an arrow shower
Sent out of sight somewhere becoming rain.

Rather than words comes the thought of high windows:
The sun-comprehending glass,
And beyond it, the deep blue air, that shows
Nothing, and is nowhere, and is endless.

Whatever the reason, I was a fan of Larkin's work from a young age, and continue to be, to this day. Since I first memorized "The Trees," not a spring has passed without my reciting the poem either to myself while I walked in the woods, or to my wife at home, or to students in poetry writing class. The ambivalence contained in the single line (describing budding leaves), "Their greenness is a kind of grief," can stand up to three decades of re-reading, easily.

I'm not alone in my appreciation of this poet. Surveys from England's Poetry Book Society (in 2003) and The Times (in 2008) found that readers considered him the country's "best-loved poet" and "greatest post-war poet" respectively. In just over a quarter century since his death, interest in Philip Larkin has, if anything, grown. Recently two statues—one of Larkin striding down the concourse of the train station and another of him in amphibian likeness, a nod to his poem "Toads"—were erected in his adopted hometown ...