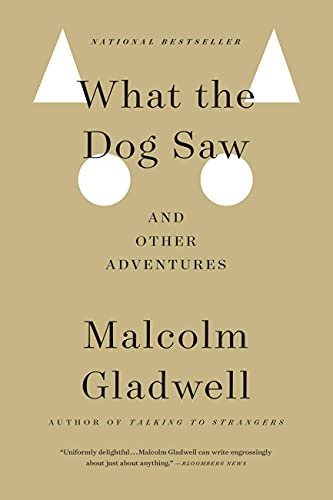 The Age Demanded an Image

On dogs and Malcolm Gladwell.

A couple of years ago, one set of happy circumstances and a popular collection of New Yorker articles came together to nudge me in a way that wasn't, as usual, unimportant and forgettable; rather, a lot of other promptings seemed to fit the same pattern.

When I got married, I was grateful to my husband, Tom, for giving me a home. I accepted the dog who came with it, a noisy and officious Shetland Sheepdog named Bradley, and I found another home for the cat I was hiding in my divinity school apartment after rescuing her, filthy and starving, from the local park. I'd been a cat lover my whole adult life, but this cat enjoyed nothing as much as sitting on Tom's head and showed no aptitude for getting along with any other animal, let alone one who would always picture her plummeting, like a dim-witted ewe from a mountain scarp, from the high perches where she spends her days.

During the first two years of our marriage, we had the good luck to live fifty yards from a meadow and a few doors from the Clerk of the local Quaker Meeting, a woman with a semi-professional interest in dogs that had devolved into a mere humorous enjoyment of living with them. During one of the first walks I took in the meadow with her and her freely ricocheting German Shepherd, she looked down at Bradley, wretched on his leash, and asked, "Does he need that?"

He didn't, and since then he's worn a leash only where it's illegal not to. A creature who worries that I will get my head stuck between barbed-wire strands of a fence isn't going to head off on his own. With his atavistic respect for an authoritative voice—I lower mine to sound like a Scotsman—I can recall him from even the most pressing research into security matters in the underbrush.

My greater open-mindedness about dogs has affirmed for me the results of certain animal-behavior research. Unlike other species of pets, Bradley goes where I point, in or out of a room, in spite of where his own judgment tells him he belongs. He stands patiently (though shivering a little) in a bathtub for any length of time if I explain that he needs a thorough shampoo and rinse to soothe his eczema. I've realized he never begs impolitely or damages anything, and when Tom and I had to pill him by force, he tried to resist without his teeth being in the way—it was touching, if hopeless. The relationship between the dog and me isn't a problem but a gift, a blessing mediated by nature, tradition, and community. The sight of him in itself reminds me of my heavy debts and painful failings, and it's an organic, unsurprising surmise that he will have a voice to plead for me (or not) before the throne of God.

This is one reason Malcolm Gladwell's writing began to bother me. He is a staff writer for The New Yorker, which has featured innumerable articles of his, and his four collections of favorite pieces—The Tipping Point: How Little Things Can Make a Big Difference (2000); Blink: The Power of Thinking Without Thinking (2005); Outliers: The Story of Success (2008); and What the Dog Saw, and Other Adventures (2009)—are so widely celebrated and so seldom read critically that the term Zeitgeist seems in order. The spirit of 21st-century social science has its shrine in Gladwell's writing. I realized that if I wanted to understand how I had been trained, from the heights of the American media, to think about human purpose, I couldn't do much better than to re-examine this prose.

The article that lends its title to What the Dog Saw has a quite typical Gladwell structure: as the topic, a complex problem or mysterious phenomenon; a charismatic expert to offer solutions; further, contextualizing or dimension-adding expertise; and an unsympathetic dismissal or a mere elision of whatever common ideas and practices suggest that any of the expertise is superfluous—traditional moral judgment is noted only to be discounted. Not all of these elements appear in every essay, but there is a pretty tight similarity across Gladwell's four existing books, and his forthcoming one, David and Goliath (about the science of the weak defeating the strong), will probably not diverge.

This marketing of science—that's in fact what it is: Gladwell studied and aspired to advertising and adheres to advertising techniques such as the penetrating image, the personal endorsement, and the product comparison—has become ho-hum in the commercial media, so at first it was almost an unconscious realization that his writing came across as quite different from nonfiction of the past, especially nonfiction with a natural relationship to public policy.

Aristotle's treatise On Rhetoric has a great deal in common with his more famous work on tragedy in setting out the solid bases for appeal to an audience. A public speaker, like a tragic poet, needs to move his listeners morally (through the depiction of ethos, or character, his own or his subjects'), emotionally (through the pathos, or experience, described, which the audience should feel it shares), and logically (through logos—yes, the same term John 1:1-5 uses to state that the Word, or sublimely coherent thought, created and sustains the universe).