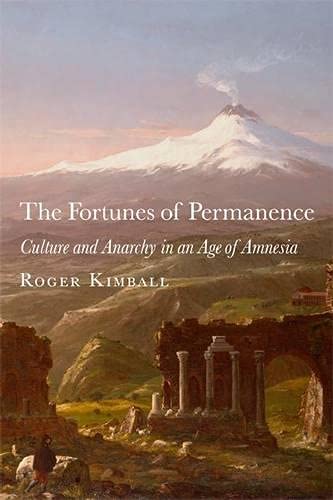 The Fortunes of Permanence: Culture and Anarchy in an Age of Amnesia
Roger Kimball
St. Augustines Press, 2012
360 pp., 35.00

On the editor and critic Roger Kimball.

This review must begin with a big disclaimer, but one I consider deeply germane to the themes of this book and my take on them. Roger Kimball, the longtime editor of the conservative cultural review New Criterion, was the first literary patron to help me achieve anything solid. Noticing a piece of mine in Bryn Mawr Classical Reviews in 1994—it's characteristic of Kimball that he was alert even to what was going on in an online forum for academic Classicists—he emailed to ask me whether I did any journalism.

Well, now I did. He cheerfully published essays of mine on post-apartheid South Africa (where I lived for a long period), on the American university curriculum, on my own translating work, and even on Christian-Muslim relations. He made my poetry welcome too, giving it a national audience in defiance of the dogma I knew from responses to my submissions elsewhere: Traditional forms and religion? Disqualified on two counts!

As a pacifist Quaker Christian living in the developing world, I had only a wildly flapping overlap with Roger's politics, but he didn't seem to care, and in his pages I fulfilled the fantasy I had nurtured from childhood on of being allowed to "say stuff"—stuff that in a tolerant forum became less fierce and more exploratory, so that, ironically, publication in a conservative periodical helped lead me toward a greater eclecticism in my views outside religion.

My excuse for warning in so much personal detail about my potential for bias is that my own experience of New Criterion might give me some insight into the delights and limitations of this particular book of Kimball's, The Fortunes of Permanence: Culture and Anarchy in an Age of Amnesia.

Among the delights are the essays on G. K. Chesterton and Rudyard Kipling. These two, in my view, may resist the general best practice of getting to know important authors at length and in a variety of their works and judging for ourselves before turning ...