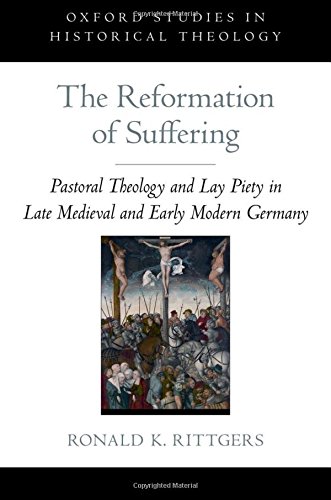 In Praise of Lament

In his 2004 study The Reformation of the Keys, historian Ronald Rittgers investigated why Lutherans retained the practice of private confession, and examined how they modified medieval penitential practice. In his new book—the deeply researched, wonderfully readable, and often profound The Reformation of Suffering—Rittgers turns to consolation, which, he says, saturates the literature of the Reformation. How did Reformation-era Lutheran theologians, pastors, and laypeople think about trial and tribulation? What significance did they find in suffering? Where and how did they find consolation?

Central to Rittgers' investigation is the claim that there indeed was a reformation of suffering. Rittgers draws nuanced distinctions among and between different theologians, distinctions that a brief book review perforce will oversimplify. Suffice to say that by the winter of 1518-19, Luther had come to believe that God did not expect or require people to contribute to their own salvation. That theological position made possible certain meanings and practices of suffering, and rendered others impossible. Specifically, Protestants rejected the view that suffering could be salvific. But suffering was far from meaningless. It could purify your heart. It could test and foster patience. It could make possible or even provoke a person's growth in Christlikeness.

It could also foster an empathetic intimacy between the suffering believer and her Savior. Luther described the suffering of Christ on the Cross in a way that broke with late medieval Catholicism, which tended to read Jesus' "My God, my God why have you forsaken me?" as Jesus speaking "in the person of the church" or referring only to "his body and the lower parts of his soul." Luther, although careful to "protect the impassibility of God," was willing to argue that, in Rittgers' summary, Christ on the Cross "suffered in every part of his human nature, experienced God-forsakenness in his entire human nature." Christ despaired, just as you and I despair. Christ was afflicted body and soul, "just as the Christian is." Thus the afflicted, suffering Christian can find "empathy and hope" in Christ.

An important theme in Rittgers' account is the intensely biblical nature of Lutheran suffering. Protestants, far from assuming that suffering was always a direct divine punishment for sin, offered a range of explanations for suffering. (The recognition that suffering ultimately emerges from sin, Rittgers notes, is not the same as the claim that every instance of suffering is a punishment for a person's individual sinful act.) Protestants could articulate many different explanations for suffering because the Bible "contains … explanations for suffering that have nothing to do with punishment." Job imagines suffering as a test of one's devotion to God; the Psalms, Proverbs, and other texts explore suffering's capacity to refine one's faith; the New Testament suggests that suffering can be a means of identifying with Christ. Laypeople heard these themes expounded in the pulpit and encountered them in books about proper Christian suffering; they also copied down or memorized consoling words of Scripture, so that in a time of trial they would have biblical words to help them persevere.

Yet one important biblical response to suffering did not find a place among Luther's heirs: lament. The psalms, in particular, contain illustration after illustration of God's faithful people calling God to account because their suffering defied not just explanation but indeed God's covenantal promises. This tradition did not find a place in a "premodern consolation literature" that consistently advised men and women to "accept their suffering patiently and make no protest against the workings of divine providence." Rittgers intriguingly suggests that this loss of lament may have had profound consequences, among them contributing to the "gradual disenchantment of the world …. Perhaps in the (very) long run, the insistence of the Western churches that human beings must face suffering without the possibility of lament has worked to undermine the plausibility of Christian faith."

The reformation of suffering, Rittgers shows, occurred among theologians and clergymen but also among laypeople. The clergy expected the laity to embrace the work of consolation. To be sure, some men and women did not handle their suffering as their pastors would have liked—they turned to folk practices or "magical" consolations—but many of the faithful took up the project of reforming suffering. In prayers and hymns of their own composing, ordinary men and women sorted out why they were afflicted, and what their spiritual and emotional trials meant. In such prayers, the laity ruminated on the true source of comfort: God, and Christ's work on the Cross. Laypeople tearfully noted that God alone could "provide [the] counsel and salvation" that would sustain the sufferer. For theologians and lay people alike, "it could only be Christ and the merit he won for humanity on the Cross" that was "the very ground of Christian consolation." This merit solaced suffering people, and made it impossible for them to narrate suffering as soteriologically efficacious: salvation came from "Christ's cross, not [the suffering person's] cross."

Laypeople also had an active role in announcing the reassurance of God's forgiveness to one another. When a Christian was suffering spiritually over a sin he had committed, absolution from a pastor after a private confession was ideal. But since confessing to a clergyman was not always possible, the church made provision for lay absolution. (A fascinating example, which one can trace from Rittgers' book to a 2004 article by Christopher B. Brown, is the authority of midwives to pronounce absolution: as quoted in Brown's article, "In order that the mother in labor may be assured of such divine grace and of the forgiveness of her sins, the midwife or another knowledgeable person may, in such danger and necessity, where no minister is available, absolve and remit her sins herself: 'Dear sister, since our dear Lord Jesus Christ has given us Christians this power here on earth, that each should and may, in necessity, absolve and remit the sins of another who confesses her sins, believes in Christ, and desires the grace of God, and that the same is then absolved in heaven … [and] since you have made such a confession before me, and in true faith desire the grace of God and the forgiveness of your sins, I therefore, in the stead and by the command of Christ, hereby release and pronounce you free of all your sins, in the Name of God the Father, Son, and Holy Spirit. Amen.' ") In such lay absolution, ordinary men and women were taking up the seemingly clerical work of giving God's consolation to one another.

The Reformation of Suffering is a historical study. But readers may find themselves pondering the persistence and mutation of the Christian suffering and consolation that Rittgers describes. Churches are by and large still deprived of lament, for example. And the larger question of the range of meanings we find in suffering is with us still. Suffering as salvific and suffering as a test, or a refinement of faith, or a plane on which the Christian may encounter Jesus—those modalities are all different from one another, to be sure. But they share an emphasis on the good work that suffering can do. As I read Rittgers' book, I thought of the hours I have spent listening to women tell me about the abusive relationships they stayed in, year after year. I thought of John Calvin's instruction to a woman whose husband was beating her: "We exhort her to bear with patience the cross which God has seen fit to place upon her." I thought that continued prayerful reformation of our churches' practices of suffering is needed still.

Lauren F. Winner is an assistant professor at Duke Divinity School. She is the author most recently of Still: Notes on a Mid-Faith Crisis (HarperOne).