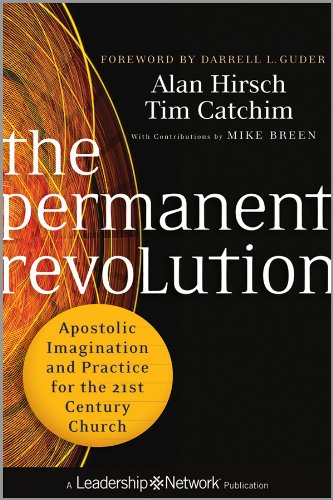 Thank you for the important and insightful article, "A New Apostolic Movement?", by Gregory Metzger [July/August]. Often, Books & Culture focuses—as it should—upon key books and discussions in the academic arena. But there are times when a thoughtful, critical engagement is necessary for a book that is having an impact on the church, even if it is not having much impact on the academy. Metzger's thoughtful critique of the excesses in the thought of Alan Hirsch and the new apostolic movement is timely, significant, and illuminating. As a scholar who seeks to serve both the church and the academy, I say a hearty "Amen!" to his call to discernment.

Clearly when authors write books, especially ones that seriously challenge cherished notions of the church and its mission, they should expect responses both critical and appreciative. Therefore our policy is not to respond to critiques of our book. If our proposal has merit, and if it is properly rooted in the theological codes of the church, then it can be said to stand on its own without anxious defensiveness on our part. Let great ideas do their work. However, in the case of the article by Greg Metzger, we choose to break protocol because we believe it is so biased it seriously prejudices the important ideas that we wish to convey.

Given word limitations, we have had to limit our response to general concerns about the nature of the article itself and simply point the reader to the (some say "overly") weighty book itself for the positive statement of our proposal. These are:

It is a somewhat loaded and tendentious piece of writing: A visitor to Greg's blog will readily notice that he appears to be on something of a crusade—and we believe largely on justifiable grounds—against the so-called New Apostolic Reformation movement associated with C. Peter Wagner and others. But because ...