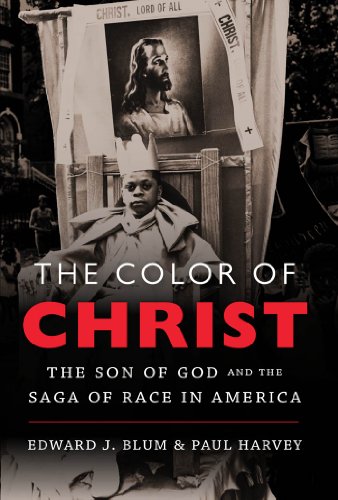 As I read The Color of Christ, I recalled a meeting of the Christian fellowship I attended in college during which the minister warned us against a conception of Christ he jokingly called "Vidal Sassoon Jesus." We all knew exactly the image he was talking about. Without knowing its name, most of us were probably picturing Warner Sallman's 1941 painting Head of Christ, which today has been reproduced over 500 million times. As Edward J. Blum and Paul Harvey show, this moment was not inevitable. The white Christ has a history. That history is complicated, confusing, and deeply consequential for Christians and Americans of all creeds and colors.

In September 1963, a bomb went off in Birmingham, Alabama, claiming the lives of four little girls playing in the basement of the Sixteenth Street Baptist Church. Upstairs, one of church's stained glass windows depicting an image of a white Christ remained perfectly intact save for the face, which was neatly excised by the blast. In the wake of the bombing, observers struggled to comprehend "what it meant for the white Jesus of a black church to have his face blown out." Writer James Baldwin called the missing face "something of an achievement," one that freed black Christians from the depredations of an "alabaster Christ" and gave them license to give their God a "new face." The window in Sixteenth Street Baptist was eventually replaced with one featuring a black Jesus, but the ambiguity of the missing face remained.

Blum and Harvey don't resolve the deeper meaning of that missing face. Instead, they set out to answer a set of historical questions it raises. What was a white Jesus doing in a black church in the 1960s? What did this figure mean to a black congregation locked in a struggle for their civil rights against a white power structure? Why, for how long, and by whom had Christ been pictured as a white man? In many ways, their book is a history of the nation and race told through the changing ways in which Americans conceived ...