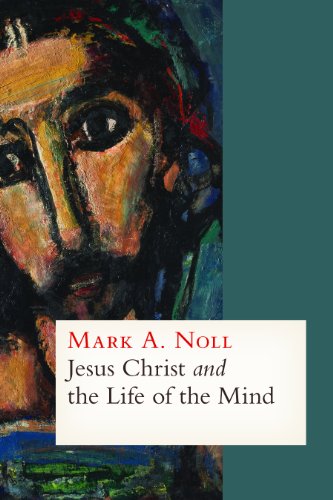 Mark Noll's "Jesus Christ and the Life of the Mind."

Mark Noll's project in Jesus Christ and the Life of the Mind is to make a case for Christians engaging in serious learning and to offer some guidelines for how they should think and act when they do. His discussion is ecumenical; but he indicates that it is especially evangelicals that he has in mind.

He begins his line of thought where most evangelicals would begin, namely, with Christ. "My contention," he says, "is that coming to know Christ provides the most basic possible motive for pursuing the tasks of human learning." But rather than adopting the typical evangelical interpretation of Christ, as little more than our savior from this present evil world, Noll turns for his interpretation to the classic Christological statements to be found in the Apostles' Creed, the Nicene Creed, and the declarations of the church councils of Nicea (325) and Chalcedon (451). His book consists, at its core, of teasing out the implications of these statements, and of their biblical background, for Christians engaging in serious learning and for how they should think and act when they do.

Let me summarize, all too briefly, the rich and imaginative Christological case that Noll makes for Christians engaging in serious learning. It's a seven-fold case.

The Nicene Creed declares that the Lord Jesus Christ, who came down from the heavens "for us humans and for our salvation … and became incarnate from the Holy Spirit and the Virgin Mary," is "the only-begotten Son of God … through whom all things came to be." The declaration that Christ our Savior is the one through whom all things were created carries, says Noll, "the strongest possible implications for intellectual life. Put most simply, for believers to be studying created things is to be studying the works of Christ."

In Colossians 1:16-17, Paul declares that by Christ "all things were created: things in heaven and on earth, visible and invisible, whether thrones or powers or rulers or authorities; all things were created by him and for him. He is before all things, and in him all things hold together." These claims, says Noll, "are striking and bear repeating. The apostle says, in effect, that if we study anything in the realms of nature or the realms of the spirit, we study what came into existence through Jesus Christ. Likewise, if we study human interactions or spiritual-human interactions, (thrones, dominions, rulers, powers), we are studying realms brought into existence by Jesus Christ."

Paul's phrase in the passage just quoted, "in him all things hold together," alludes to the Christian doctrine of providence. "From the perspective of providence," says Noll, "everything that exists is sustained by the wisdom and power of God." Accordingly, we can be confident that God will never leave us or forsake us (Heb. 13:5-6). "The academic payoff for this confidence in providence," Noll writes, "is the conclusion that, if God rules all things with respect to the individual's salvation, certainly he rules as well the more general events and circumstances of the wider world …. In sum, to believe that we are attached to Christ inspires the confidence that God can be attached to anything we might study."

The fact that the Word was made flesh implies that "the realm that bore the Word, the realm of flesh, is worthy of the most serious consideration …. [T]o confess the material reality of the incarnation is to perceive an unusual dignity in the material world itself." Indeed, if "the reality of Christ points, not simply to an engagement with the world, but to an engagement marked by delight, exuberance, and the aesthetic possibility of redemption," it follows that "the people of God have been redeemed by the action of God in this world … to bestow the potential of drama and delight on human engagement with the world." The Incarnation, which represented not only the humbling of the divine but the dignifying of the human, gives dignity to the "human study of human beings. Put differently, the personality of the incarnation justifies the study of human personality. When people examine other people, they are examining individuals who exist in actual or potential solidarity with Jesus Christ." Last, "the revelation of divine glory in Jesus Christ—as singularly displayed on the Mount of Transfiguraton—might frame thinking about first-order aesthetic experiences …. [T]hrough learning of Jesus Christ we learn of God's chief purpose in creating the world; that chief purpose is the manifestation of his own glory; the manifestation of God's glory accounts for the deep origin of all that is beautiful in the world."

This is a compelling case for Christians engaging in what Noll calls "serious learning"; anyone who accepts the creedal understanding of Christ will find themselves led along by Noll to his conclusion. Noll does not claim that a Christological case for Christians engaging in serious learning is the only sort of case that could be made. He does call it "the most basic possible motive"; but that's compatible with there being other resources in the Christian faith that could be employed to reach the same conclusion. Noll has chosen to articulate the Christological case. I have nothing but admiration for how he does it. It is an important contribution.