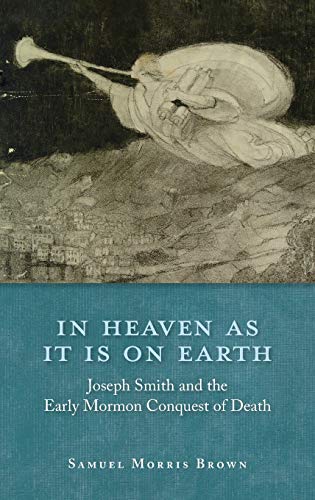 In Heaven as It Is on Earth: Joseph Smith and the Early Mormon Conquest of Death
Samuel Morris Brown
Oxford University Press, 2012
392 pp., 47.95

The Chain of Belonging

On July 9, 1845, Mormon apostle Willard Richards rose, dressed, and administered rites of healing to his wife Jeannetta, who had been sick for two months. He "kneeled in prayer and laid hands on her three times with the signs which she repeated." In these rituals of healing, Latter-day Saints repeated portions of the sacred gestures and words of the church's endowment ceremony. Richards, knowing the gravity of his wife's condition, sent for other high-ranking church leaders to join in the rites and prayers. Jeannetta felt encouraged and asked, "How can I die under such prayers?"

Later that morning, though, Jeannetta stopped breathing. Willard and the others present "continued to bathe her twelve hours." Even after her body grew cold, they persisted until two o'clock the next morning. Willard slept in the room next to his wife's corpse.

The next day at sunset, a group of Mormon women dressed Jeannetta and laid her in her coffin. "Will you bury Ma in the garden?", four-year-old Heber Richards asked his father. "If you do I can bear it. If you do not I cannot bear it." Willard Richards told his son he would bury Jeannetta in the garden.[1]

Jeannetta Richards, like many others in antebellum America, knew how to die: with calm resignation and expressions of faith, surrounded by their loved ones during extended vigils that often extended for many hours after death. Apart from the specifically Mormon rites of healing, her deathbed resembled that of many Protestant Americans who modeled a holy, happy, and triumphant death.

In Heaven as It Is on Earth, Samuel Morris Brown's groundbreaking study of Mormon prophet Joseph Smith's theological and ritual responses to the Protestant culture of "holy death," is far more than it appears at first glance. Brown, a critical care pulmonologist and autodidactic historian, offers a riveting reinterpretation of Smith's religious vision, brings his readers into the cultural world Smith inhabited, and also reflects on the need for contemporary Americans to "walk toward, and—earnestly, anxiously—through death with each other." In Heaven merits a broad readership that stretches beyond the confines of both Mormonism and academia.

As Brown explains, antebellum Americans obsessed over the dead, both the recently departed and those from centuries past. They inhabited a landscape that contained burial mounds, Indian relics, and—many thought—ancient treasures. They also lived amid high death rates and unexpected partings. Joseph Smith and his family endured their share of such partings. In 1823, Joseph's older brother Alvin died, a loss which never lost its sting for the Mormon prophet.

Brown connects Smith's religion-making quest to his collision against the limitations of antebellum death culture. Whereas many Americans retained a medieval, macabre fascination and horror with the decomposition of human flesh, Smith announced his belief in the corporeality of God, the materiality of the human soul, and the eternal nature of matter. "No beginning," Smith pronounced in an 1844 sermon, "no end." Many people in the American hinterlands found Indian relics and employed methods of divinization in search of buried treasure. Smith himself eventually used seer stones to "translate" golden plates containing accounts of ancient peoples whose corpses once littered the American countryside. A Mormon militia en route to Missouri in 1834 discovered a nearly intact skeleton within a burial mound; Smith identified the corpse as Zelph, a warrior who had perished in the one of the Book of Mormon's epic battles. "Whatever his ultimate credibility," Brown writes, "Joseph was ever in pursuit of the dead and their legacy." Through his encounters with angels, his narratives of ancient civilizations, and his identification of sacred landscapes (such as Jackson County, Missouri, as the site of the Garden of Eden), "Joseph the Seer" allowed the dead to speak to the living.

Expecting the future physical resurrection of the dead and the restitution of their earthly bodies, Smith noted that "we shall want to see our relatives first & shall rejoice to strike hands with our parents, children &c when rising from the tomb." Thus, in Nauvoo, Illinois, Smith built a family sepulcher which he called the "Tomb of Joseph," to which he hoped to move the corpses of Alvin and other buried loved ones.

It was not enough for Smith to live and die with his familial and ecclesiastical kin. Over the last five years of his prophetic career, Smith feverishly sought to bind human beings together in ties that would persist for eternity. His followers received patriarchal blessings that connected them to their ancient ancestors, plunged into the turbid Mississippi River in proxy baptisms for their dead, and found assurance that their marriages would persist for eternity.