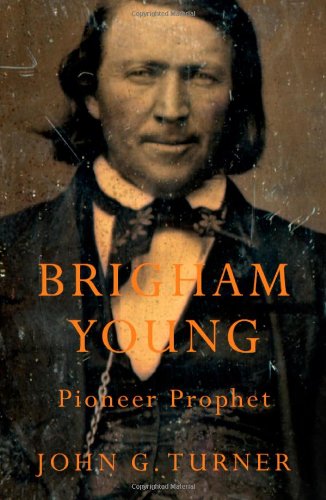 The life and legacy of Brigham Young.

Photos of Brigham Young, like the one on the cover of John Turner's magnificent new biography, do not show him in the best light. His hair is long and unkempt, like a pageboy without the bangs, and his lips are pursed between a smirk and a smile. His eyes display a slight squint, as if he is challenging the viewer to guess his state of mind. Turner's book shows just how hard that would have been to do.

Joseph Smith's successor in the Mormon church, Young was as tough-looking and rough-spoken as Smith was handsome and charismatic. Young was a schemer, while Smith was a dreamer, which helps explain why Smith is immensely easier to love (or at least appreciate). Nonetheless, without Young, Mormons would not have had much of a history to tell, or a church to spread. Smith imagined countless kingdoms in the heavens above, but Young built one in the Great Salt Lake basin that is still going strong. He was, in Turner's words, "blunt spoken, pugnacious, and sometimes profane." He delighted in the comparison his followers made between himself and Moses—both were lawgivers as well as determined men of action who fought against impossible odds for religious freedom—except that Young made sure that he did not die before he entered (and ruled) his promised land.

Turner's first book was a biography of Bill Bright, the founder of Campus Crusade for Christ (which I reviewed for this magazine in May/June 2008). His new book should establish him as one of the best religious historians of his generation. Turner had unfettered access to Young's papers, and his keen eye for social context makes this book an excellent introduction to the story of Mormonism as well as an essential addition to the history of the American West. It should also do for Brigham Young what Richard Lyman Bushman's Joseph Smith: Rough Stone Rolling did for the Mormon prophet: make the case not only that Young was one of the most fascinating people of the 19th century but also that his importance in American history can no longer be overlooked. Indeed, some of that history will have to be revised to fit this "pioneer prophet" into its narrative.

Consider these claims from the book, a bit sensationalistic, perhaps, but compelling nonetheless: After the Mormons were expelled from Illinois, Young led them out West, where they "staked their claim to approximately one-sixth of the western United States, making Brigham Young the greatest colonizer in American history." And that land was to be populated: "By the time the transcontinental railroad (completed in 1869) greatly eased the financial and logistical burden of emigration, Brigham Young had presided over the organized emigration and settlement of more people than anyone else in American history." Looking abroad, "Mormons were the first American religious church or denomination to systematically evangelize Great Britain." And of course, there was polygamy: Over a period of nearly fifty years Young married at least 55 women, according to Turner's calculations, making him "probably the most oft-married man in America."

I should answer the question that everyone will be asking. Yes, this is a sympathetic treatment of its subject, even when it looks in depth at Young's darker side. Mormonism is a controversial topic for any historian, but Turner's prose is so smooth and his interpretations so balanced that I suspect Mormonism's defenders and detractors alike will flock to this book. Unlike Bushman, Turner is not a member of the Mormon church, which makes his achievement all the more remarkable. Critics of Mormonism will wish that Turner had been harder on Young, but how could any biographer not be enthralled by a man whose personality was as big as the Utah territory he spent thirty years defending from the U.S. government, non-Mormon emigrants, and its own native population? Those looking for Young's foibles and failures will find plenty of evidence here, from his theocratic posturing to his intemperate treatment of subordinates, but no close reader of these pages will be unmoved by the enormous responsibilities Young faced and the ingenuity and industry of his undertakings.

Young gave voice to many of the cultural and theological tensions that Mormonism holds together to this day. His pioneering spirit was evidence of his belief in good works over grace, yet his sermons emphasized just how much the faithful should depend upon and support one another. He was a man of enterprise who loved theological speculation; a defender of the right to divorce, especially for women, who sealed marriages in the Mormon Temple for all of eternity; and a staunch believer in lay leadership who ruled over the Mormon church like an autocrat. Perhaps most paradoxically, he was forced to build and fortify an earthly kingdom in the middle of the desert in order to have a place where Mormons could begin imagining what it would mean to collapse the differences between God and us, eternity and time, and the supernatural and the natural.