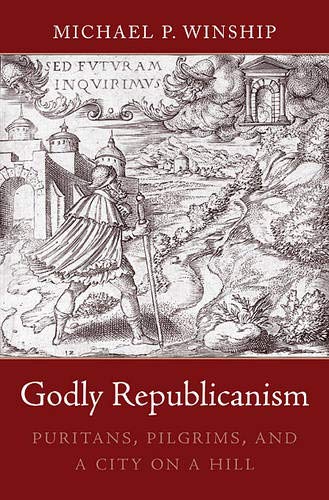 Winship engages in quite a bit of densely footnoted inside baseball to defend these conclusions. First, "New England" means primarily the Plymouth colony (founded by "Pilgrims" in 1620), Massachusetts Bay, and New Haven (a separate colony on the north shore of Long Island Sound that existed from 1638 until absorbed into Connecticut in 1662). Connecticut, first settled as a kind of outpost of Massachusetts in the mid-1630s, but where its definite charter of 1662 came from the king and whose churches always leaned a little bit more toward presbyterianism, also counts as "New England" but not quite as purely.

Godly Republicanism directly challenges long-accepted opinion that has denied the general importance of the Plymouth Colony. It was founded by "moderate separates" who had abandoned efforts to reform the episcopal Church of England and whose wanderings had taken them to the Netherlands before they came to America. Their key role, according to Winship, was to display an actually functioning model of a truly scriptural church for the Puritans who arrived in great numbers from 1629, but whose protests against Anglican abuses had never clearly united behind a single alternative for a biblically reformed church life. Thus, Plymouth strongly supported the initial Massachusetts church, founded at Salem in 1629, when it established itself as a "militantly" (my word) Puritan congregation, and then guided succeeding Massachusetts churches toward their determined form of Puritan congregationalism. Winship also challenges the many accounts of early-modern republicanism that have pictured it as an essentially secular ideology strongly inimical, with its all-out focus on worldly power, to the Puritans' strict Calvinism. Instead, he argues that the "godly republicanism" of early New England came directly from spiritual sources. The Puritans' greatest desire was to bring about biblical reform of churches corrupted by abuses of unchecked power. In Massachusetts and New Haven, Puritans also set up a system to ensure that truly virtuous citizens controlled the body politic. This was a scheme whereby the freemen (male citizens) elected the colony's officials, the sole qualification to be a freeman was church membership, and church membership required a testimony of God's gracious work in one's life. Explicitly Christian virtue thus grounded the health of the "commonwealth," an expressly republican term. Those scholars, including myself, who have described the republicanism of the Revolutionary era as secular may reply that the early Puritan arrangement was soon modified by the Puritans themselves and then completely abrogated when Massachusetts was taken over as a royal colony in 1684.[4] But Winship nonetheless makes a strong case for a definite Christian root to the founding republican principles of the United States.

This re-interpretation of early New England history hinges on careful discrimination among the different varieties of English and American Puritans. Never, one might think, has a scholar made so much of so little. Yet paying close heed to how he describes these Puritan varieties is, in the end, convincing. The following chart, which sets things out as an "invention" in the Ramist logic so beloved by the Puritans, summarizes those distinctions, though it would have clarified Winship's argument if he himself had provided such a scorecard.

Stuart Anglicans were the monarchs, James I and Charles I, and their bishops who opposed Calvinism, promoted Arminian theology, and moved toward Catholicism in their rituals. To the Puritans they constituted a stupendous barrier to the biblical reforms that the English church so desperately needed.

In Winship's usage, Puritans were the great promoters of church reform, but who also insisted on maintaining "Christendom," or the comprehensive church-state unity that had been the European norm for more than a millennium.

Conforming Puritans were willing to live with the Anglican system of bishops if they were free to promote Calvinist theology and biblical preaching.

Presbyterian Puritans wanted to replace the bishops with regional and national synods of godly pastors and lay elders. They expected congregations to aid in selecting pastors, but, once selected, the pastors, acting in presbyteries, were to be the controlling force in promoting godliness. Presbyterian Puritans, closely aligned with Scottish Presbyterians, gained the upper hand in the early years of the English Civil War, during which time they organized the Westminster Assembly that produced the famous Confession and other Presbyterian standards. But these English Presbyterians lost out to the congregational and more radical elements during the ascendancy of Oliver Cromwell.