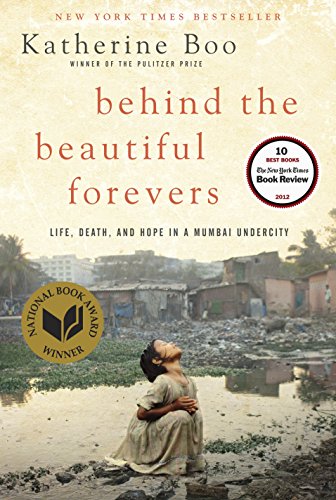 Imagine a dirt seashore rippled with footprints, tire ruts, the carcasses of scabby water trash. In the dark of night, its far bank shimmers with hotels, the stock skyline of a modern beach; in the air, tourist jets queue and gleam.

Save for the stench, you might be forgiven for misjudging the maidan, a dirt proscenium on which Behind the Beautiful Forevers plays out. Drawn in Katherine Boo's novelistic nonfiction prose, there is something mysterious and even beautiful about its sea—a sewage lake, with a tide fixed to the slog of wandering buffalo—and the maidan's lumpy sprawl: the handiwork of low-caste squatters who stole a bog, built a landfill, and took up residence in a Mumbai slum they named Annawadi.

Known largely for her Pulitzer Prize-winning exposés of U.S. poverty, Boo picks up the story where her 2009 New Yorker article "Opening Night" left off: in Mumbai's trembling, teeming undercity, on the eve of the Slumdog Millionaire movie premiere, where the striving, legion poor trade in trash while overcity dwellers get manis and pedis at the Hyatt across the sewage lake.

"Opening Night" contains the germ of Beautiful Forevers: an examination of the international economic downturn's butterfly effect, with a focus on the enterprising slum-dwellers who roost on prime, trash-rich real estate between Mumbai's International Airport and a phalanx of luxury hotels. Here, life and death hinge on a black market fueled by the detritus of modern consumption, and when a freeze in worldwide bank lending stalls Mumbai construction projects, the slum's prospects plummet.

It is one thing to read the excerpted fact that a "kilo of empty water bottles once worth twenty-five rupees was now worth ten." It is another to encounter in Boo's impossibly intimate account the smells, sights, and physical anguishes of child waste-pickers like Sunil, one among the "new economy's micro-saboteurs" who staves off hunger by sneaking into half-constructed parking garages and stealing ...