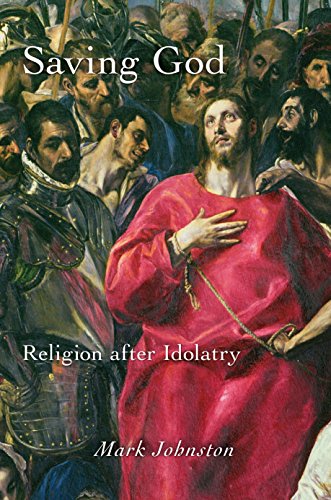 Princeton philosopher Mark Johnston was educated by Jesuits and briefly considered taking priestly orders before opting for a PhD in philosophy instead. He went on to make important contributions to several subfields of philosophy—metaphysics, ethics, philosophy of perception. But his work, like that of most analytic philosophers, has appeared mainly in professional journals, and is too technical for most of those outside the guild.

Johnston's Saving God, together with its sequel Surviving Death, marks a bold and very public return to the theological questions that he seemed to have left behind upon entering philosophy. It's not clear what roused him from his technical slumbers, though one gets a hint when Saving God begins with a deliciously dismissive critique of the "undergraduate atheisms" of Dawkins, Harris, Hitchens, and company. It soon becomes clear, however, that Johnston is just as intent upon demolishing the traditional forms of religion targeted by these "New Atheists"; what they lack, he suggests, is sufficient philosophical firepower to carry out the job. They also lack the religious sensitivity to see that there might be a deeper truth in the traditional monotheisms that goes beyond their official creeds and dogmas.

In the second part of the book, Johnston draws on biblical and historical scholarship, ancient and modern theology, and philosophers as diverse as Saul Kripke, Martin Heidegger, Nicholas Wolterstorff, and René Girard, to present a positive case for what he regards as the "one true religion." This turns out to be a science-friendly panentheism according to which God is something like Being itself—or, more exactly, the lawfully ordered outpouring of Being into other lesser beings, not for their sakes but for the sake of its own self-disclosure. The "Highest One" Johnston describes is supposed to call for three distinctively religious responses from us:

(a) We must recognize it as such, seeing all of reality as exemplifying ...