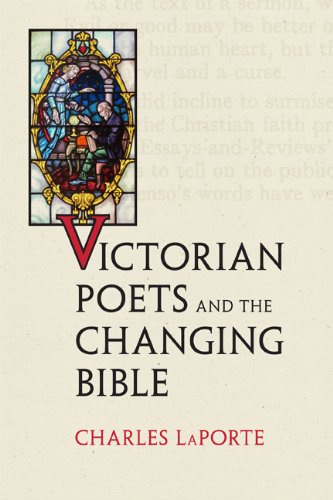 Victorian Studies is a thriving academic subfield complete with a healthy selection of its own learned societies and journals. It is primarily made up of literary scholars and historians. Charles LaPorte, the author of Victorian Poets and the Changing Bible, is from the former guild, while I am from the latter. As a sort of historical fool at the literary feast, therefore, I would like to use this review to explore what is currently going on in English Departments—at least amongst their Victorian Studies members whom I have been observing and reading for quite a few years now. (I suspect some of my complaints might not apply as much to, for example, scholars of early modern English literature.)

LaPorte's book offers close readings of some Victorian long poems: Elizabeth Barrett Browning's Aurora Leigh, Alfred Tennyson's The Idylls of the King, Arthur Hugh Clough's Dipychus and the Spirit, Robert Browning's The Ring and the Book and Red Cotton Night-Cap Country, and George Eliot's The Spanish Gypsy and The Legend of Jubal. These are presented as, first, responses to modern biblical criticism and, second, as representative of the expectation held by some Victorians that English literature might be able to augment or even replace the Bible. (Matthew Arnold famously pronounced that poetry was the future of religion.)

What strikes me from the outside is that with the exception of certain very small academic niches, where they might function as a sort of Gnostic rite of initiation, by and large people do not read these poems anymore. Moreover, the disciplina arcanum of mystery cults notwithstanding, I would even wager my lovingly acquired collection of 19th-century first editions that quite a few members of the North American Victorian Studies Association have not read most of these poems.

I cannot help but wonder whether or not we should count this a loss. Do these poems have substantial, intrinsic literary worth? Do they illuminate the human condition in sufficiently ...