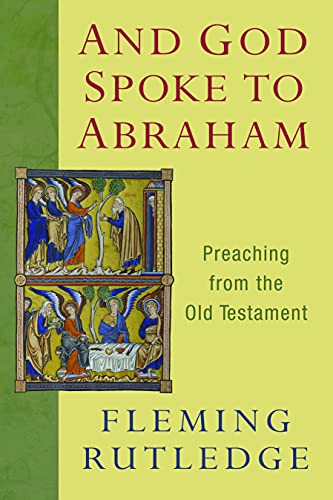 In theory, I am committed to preaching the Old Testament. I generally feel exercised about how little the Old Testament is proclaimed in churches, how rarely it is preached, how many Christians act as though the Bible started with Matthew. Yet when I look back over the sermons I have preached in the last few years, the vast majority of them take up passages from the Gospels—and although my congregation reads a psalm every single Sunday, I have preached on a psalm exactly once. I am not proud of thus defaulting to the Gospel reading. In doing so, I am, I think, infecting the pulpit with Marcionite tendencies that are already too widespread.

I am not alone in this. As Dennis Olson noted in a 1990 article in the Journal for Preachers, many clergy steer away from Old Testament preaching, for a number of reasons—ministers doubt their own command of the historical context of Old Testament books; ministers suspect that their congregants find the detailed genealogies and laws of Old Testament books off-putting; and so forth.

As a new volume of sermons makes clear, Fleming Rutledge—an Episcopal priest who has for many years devoted herself to a ministry of peripatetic preaching—is an exception (one of many) to the general rule. And God Spoke to Abraham brings together 55 of her Old Testament sermons; the oldest dates to 1975, the most recent to 2010. Here are sermons on Abraham and his three visitors, and on the Exodus. Here is an Ash Wednesday sermon on Psalm 51 and a Trinity Sunday sermon on the burning bush. Here is a sermon, originally preached at a small conjoined Episcopal-Lutheran church in western Massachusetts, in which Rutledge reads the fortunes of the shrinking mainline through the prophet Isaiah: Yes, "the church in New England is in exile in the very land of its birth," but into "this decline? … the One who has demonstrated his power to raise the dead and pour out his Spirit upon the church even in the wilderness speaks to you and to me this very day as if for the very first time …. I will not forget you. See, I have inscribed you on the palms of my hands."

Rutledge has a rare command of the English language. Her prose is piquant; her paragraphs stand up like starched pieces of clothing. But she is doing far more in these sermons than crafting admirable sentences. She is instructing the church about who our God, the God of Israel, is.

I think of Fleming Rutledge first and foremost as a preacher of Paul. In her Pauline sermons (some of which may be found in an earlier collection, Not Ashamed of the Gospel), she preaches the good news of liberation from the powers of destruction. She preaches the gospel of a gracious God who forgives our sins, and sets us free from sin (sin understood both as corporate powers and individual compulsions). This, it turns out, is not just Rutledge's word when she is preaching Paul. In her Old Testament sermons, she sounds the same theme: thus, in a sermon on Jeremiah 31, she takes up the Lord's having "redeemed [Jacob] from hands too strong for him," a redemption that makes it possible for "maidens [to] rejoice in the dance." The message, Rutledge says—the "unified message … from the Old and New Testaments"—is that "There can be no rejoicing in the dance unless the Lord redeems us from hands too strong for us." God—the God who is revealed most fully and finally in Jesus Christ—is the God who redeems us from those too strong hands.

Rutledge does not shy away from these questions. In the introduction to And God Spoke to Abraham, she argues that Christians must "read the Old Testament in light of the New"—it is "impossible for a confessing Christian to do otherwise." In saying this, she is decidedly not calling for a kind of Christian reading that is deaf to Israel's own voice; she is not countenancing reading that refuses to credit the faithfulness of Israel or the past activity of God among the Jewish people. To the contrary, Rutledge states clearly that "it is imperative that we remember that the Torah constituted the Jewish community. We cannot simply appropriate the Old Testament for the church and interpret it Christologically without giving thought and care to what we are doing." One might add only that Torah constitutes the Jewish community still.