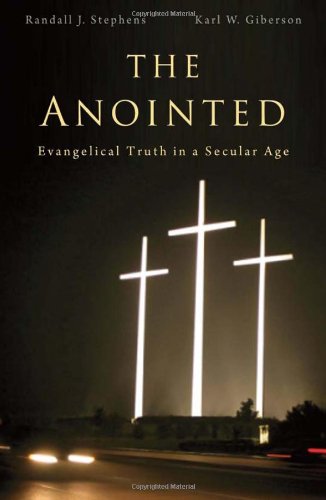 Longtime readers may remember that Books & Culture originated in 1995 as a fairly self-conscious answer to what Mark Noll had recently dubbed "the scandal of the evangelical mind." His cri de coeur explored the roots and implications of American evangelicalism's failure to craft or sustain a robust intellectual tradition, and the pages of this review have since endeavored to foster a counter-narrative by energizing and exhibiting the best of Christian thinking. But Randall Stephens and Karl Giberson have penned what might be read as a progress report on the state of the evangelical mind, 17 years out. And their news is not encouraging.

The Anointed surveys conservative Christian discourse in four areas—human origins, American history, the family, and end times—and observes the persistent tendency of rank-and-file evangelicals to coalesce around certain charismatic leaders with scant academic training who tout poorly reasoned, ideologically driven theories that are almost universally rejected by credentialed scholars. Stephens and Giberson provide substantial but lively discussions of each sphere, showing the lengths to which evangelicals have gone to uphold commitments to Young Earth creationism, the biblical foundations of the American republic, the normativity of the traditional nuclear family, and the imminent, cataclysmic end of the world.

The authors offer useful historical surveys that help explain the cultural warfare that has long informed evangelical allegiance to these positions. In each case, "pseudo-intellectual" arguments are freighted with dire warnings of cultural and moral decline driven by an uncompromising secularist assault on Christian values. While there is a long history of evangelical demagoguery, Stephens and Giberson highlight four contemporary figures that best typify evangelical imperviousness to critical thinking: Ken Ham, president of Answers in Genesis and founder of the Creation Museum, whose rigid commitment to Young Earth creationism ...