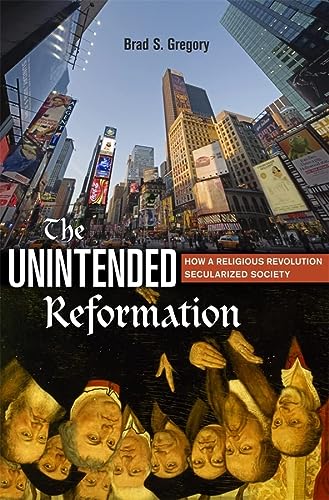 Where the Rot Started?

Imagine a scenario in which the exercise of religion is free only to the extent that secular states permit it. Even in states that have allowed religious diversity to flourish in spaces formally separated from the state, the political motive is to protect society from religion's disruptive effects by quarantining it in the private sphere. Within this sphere, believers have become tamer because most of them have ceased to believe even in the moral truth of their respective credos. For meanwhile the separation of state from churches has become a separation from religion, while among the "religious" the belief has taken hold that "science" has disproved the possibility of verifying religious truths, demoting them to the domain of subjective feeling.

Science itself, however, has been unable to occupy this religiously denuded public space because, though dominant in public and even private universities, the various sciences have not sought to relate themselves to each other as a coherent whole or even addressed, much less answered, the sorts of questions that define human beings and once lent ultimate meaning to their lives. What has taken the place of religious commitment is the "economy" in the form of an ever greater consumption of the goods that science in the service of technology and industry delivers. Combined with an ever more malleable and mercurial "self" defined in terms of the fulfillment of material desires, the urge for infinite acquisition has become the default religion even of believers. This "religion" prevails even though in acting it out Christians violate their own religion's claims that self-love and covetousness are close to the essence of sin. The religion is that of Cole Porter's "Anything Goes," or, more recently, "Whatever."

Yet this state of affairs cannot last because neither science nor philosophy can prove the existence of individual rights, the maintenance of which is the liberal state's only reason for existence. The ecological limits of indefinite production and consumption moreover threaten to topple the very foundations upon which this default religion rests.

This scenario in a few words characterizes the symptoms of liberal Western "civilization" and its discontents as sketched by Brad Gregory in The Unintended Reformation: How a Religious Revolution Secularized Society. Or rather liberal Western civilization and its "contentments." For while the attempts to stamp out religion in postwar totalitarian states have seemed to be a fulfillment of the scenario envisioned by George Orwell in 1949 in his Nineteen Eighty-Four, most of which regimes did not long survive the year 1984, the scenario in more "liberal" states has come to resemble the "soft" inculcation of conformity and obedience via the pleasure principle foreseen in 1932 by Aldous Huxley in Brave New World.

Bleak to a fault, the total picture is attenuated by a few bright spots. However contentless or value-free the notions of rights and religious toleration it has undergirded may have become, Gregory has to admit that the policy of religious toleration is perhaps better than the heavy-handed persecution of religious minorities by Catholic and various Protestant confessional states during and after the wars of religion. And however morally corrosive and cretinizing the effects of post-industrial or post-Fordian capitalism and the default religion of indefinite consumption, Gregory is bound to concede that the industrious and Industrial Revolutions have lifted vast numbers out of grinding and equally stupefying poverty that, left to its own devices, medieval Christendom would not have alleviated. That modern science has revealed much more about nature's two infinities, macrocosmic and microcosmic, than even Pascal ever dreamed possible similarly finds favor in Gregory's estimate. Since the 17th-century Dutch Republic figures prominently in Gregory's analysis as a showcase of the forces that went into the making of the present state of affairs, it is hard to resist the perverse temptation to ask if those who would have preferred the Counter-Reformation to have created a greater Belgium in its place might not wish to reconsider.

Enough has already been said to indicate that Gregory's Unintended Reformation is not a "pure" work of historical analysis, much less narration. Although informed by no little historical analysis and synthesis, this book is also unabashedly a "tract for our times." And because Gregory locates the Protestant Reformation and the consequent division of Christendom as the remote yet ongoing cause of the contemporary state of affairs as depicted by him, this book is also an unapologetic exercise in Catholic apologetics. True to its conclusion, which calls for nothing less than a "desecularizing" of the American academy, The Unintended Reformation is an opening salvo in that direction. Not unlike Luther's Ninety-Five Theses, this is a book that begs for a debate. It will surely get one.