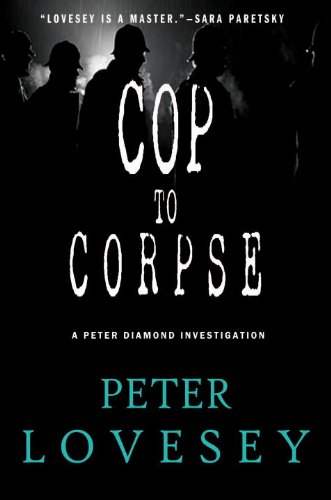 A crime fiction series worth catching up with.
July/August 2012

Detective Superintendent Peter Diamond has problems. At age fiftysomething, over-weight, with high blood pressure and poor eating habits, he's a walking heart attack. A wid-ower, he lives alone except for his cat. Churlish, pig-headed, a bit of a bully, he antagonizes everyone on his staff—including even those he most appreciates. His superiors value his insights but dislike working with him, since the authority he most respects is his own. He has maybe one friend.

Diamond is the creation of British author Peter Lovesey, 76, winner of the Crime Writers' Association's Cartier Diamond Dagger award for lifetime achievement as well as many other awards for his more than 30 books. Lovesey's newest mystery, Cop to Corpse, is the 12th installment in the Peter Diamond series. As the story begins, Diamond's world has become exceptionally dangerous.

At about four o'clock on a Sunday morning, police constable Harry Tasker, on foot patrol near Bath's city center, is shot dead by a sniper using a high-velocity assault rifle. This is the third murder of a policeman in the Avon and Somerset constabulary in just 12 weeks (an amazing toll when you consider that, in the real world, there were only 18 murders in that district all last year). Diamond is understandably worried. Apart from being police, the victims seem randomly chosen. Is anyone on his staff safe?

At the scene, Diamond learns that Chief Superintendent Jack Gull of the Serial Crimes Unit is in charge. This does not bode well. Gull, at least a decade younger than Diamond, is a foul-mouthed climber who readily takes credit for other people's ideas. Diamond has ways of dealing with difficult people, but he never lets them get in the way of his own investigations. Put these two men together and sparks will fly. Still, on Sunday afternoon, when a suspect is sighted in a nearby wood, Diamond and Gull join forces and rush to the scene. For two nights they and a team of police—mostly young and unarmed—patrol the densely forested area in hopes of capturing an armed murderer who, they believe, knows the area well and will readily shoot any policeman on sight.

It takes five stressful days and four nerve-wracking nights for Diamond to solve the puzzle and once again assure the relative safety of the Bath police force—a hundred hours packed with suspenseful stake-outs, cryptic threats, tangles with a hustler and a neo-Nazi, the pursuit of several plausible but false leads, and the near mutiny of his entire staff. As Diamond tracks lawbreakers, a parallel story unfolds involving a trio of amateur detectives, a seller of stolen goods, and a secretive man in the midst of a nervous breakdown, or worse. The stories come together in a hair-raising dénouement: one misstep by Diamond, and the series will abruptly end.

Superintendent Diamond isn't easy to like. After following his exploits for a book or two, some readers give up trying (they probably don't care for Harry Bosch, Kurt Wallander, or Inspector Morse either). Others of us—despite our love for sweethearts like Adam Dalgliesh and Tom Barnaby—have grown fond of the prickly detectives who investigate so many fictional murders. If the murder mystery, with its drive toward justice in spite of overwhelming odds, is the quintessential biblical story, then the flawed detective must be the quintessential biblical hero: full of original sin, but nevertheless instrumental in repairing the world.

At first, though, I was put off by the flawed detective from Bath. "What I know about Peter Diamond," I wrote when I'd finished reading Cop to Corpse: "He is big. He has a beer belly. His wife was murdered four years ago. He lives alone. No mention of children. He has a friend with privileges, Paloma, who serves more as a foil than as a romantic partner. He pushes himself. No indication of hobbies or outside interests. No inner life. No moral quandaries. Competitive, but willing to back down. No enemies."

This wasn't nearly enough information to make the burly detective lovable. Pure procedurals and puzzles can be entertaining, but the most engaging series also draw us in to their characters' personal lives. Cop to Corpse did not do that. Its central puzzle, however, was compelling; and besides, Books & Culture had asked me to answer a couple of interesting questions: Is it OK to jump into the middle of an ongoing detective series, or should a reader start with the first book? And having begun with book 12, was I motivated to go back and read previous Peter Diamond stories?

Despite my reservations, I was motivated. Maybe if I read an earlier book or two, I thought, I'd grow fonder of Mr. Diamond. So I grabbed The Last Detective off the library shelf … and a month later, when I came up for air, I'd read 11 of the 12 books in the series (Skeleton Hill was at the bindery). I now know that Peter Diamond is much more than a grumpy detective who keeps the plot moving. Mostly bald with a silver fringe, possibly resembling actor Timothy Spall, he hates post-mortems and fast driving, does not read Jane Austen, resists technology, is uncoordinated and accident prone, should not be allowed to perform simple household repairs, admits his mistakes, pursues the truth whatever the cost, eats beans on toast, wishes he had children, excels at thinking on his feet, hates acronyms, is phobic about theatres, and—though he resists talking about his feelings—loves deeply. He is real, he is good, and I am thankful he is not my boss.

Even so, plot, not characterization, drives the Peter Diamond books. Though Lovesey's plots are not labyrinthine—you can follow them without taking notes—they usually weave two or three stories together and often bring in interesting sidelights. The Vault, for example, has a lot to do with Mary Shelley and the writing of Frankenstein; The Secret Hangman touches on extremist religion; and Bloodhounds looks at detective fiction itself: it features a book club whose members find themselves embroiled in a real-life locked-door mystery.

Besides plot, place is fundamental to all 12 books. The stories are situated in and near the city of Bath with its Roman artifacts, Gothic abbey, Georgian buildings, peaceful parks, and painfully ugly police station. Humor is something else the books have in common. Cop to Corpse, though grimmer than most, gives us the hilariously bumbling D.I. Polehampton and the "cello shaped blonde" witness Sherry Meredith. Stagestruck introduces the hope-lessly pedantic wannabe detective Sergeant Dawkins. A champion sumo wrestler swoops to Diamond's rescue in Diamond Solitaire. And Upon a Dark Night had me from the moment the adipose, foul-mouthed, persistent, good-hearted shoplifter Ada Shaftsbury waddled into the story.

So what about beginning a detective series with the last book? After reading the earlier Peter Diamond volumes, I re-read Cop to Corpse. I liked it better the second time around, now that I knew more about the detective and his city. My advice? Don't start this series with book 12. If you're patient and methodical, read the books in the order they were written. But it's also fine to begin reading somewhere in the middle. If you want to get well acquainted with Peter Diamond (and don't mind spoilers), start with Diamond Dust. If you're a fan of cozies, go for Bloodhounds or The Vault. If you lean toward thrillers, try The Summons. Or just grab a Peter Diamond book at random and start reading—the whole series is a delight.

The Series So Far:

When LaVonne Neff isn't reading detective stories, she is blogging at livelydust.blogspot.com and neffreview.blogspot.com.