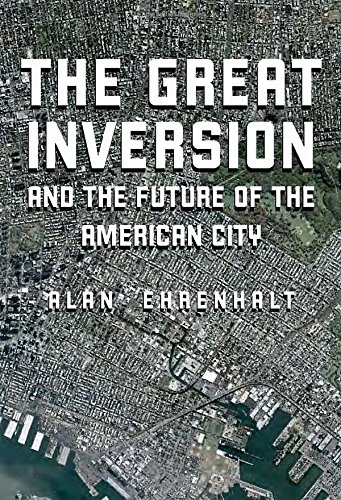 If you watch enough episodes of House Hunters, Property Virgins, or any of the other myriad reality shows in which people search for and eventually purchase a home, you will find that buyers, and especially young buyers, want three things (in no particular order): a kitchen with granite countertops and stainless steel appliances, an open floor plan, and a location within walking distance of shops and restaurants. When I began to watch these shows a few years after my own move from the city to the suburbs of New York, I was a little surprised by how commonly this last factor was mentioned, especially by couples with children or children on the way. I nearly fell off the couch when I saw a young couple demanding that their realtor find them a place "within the Cleveland city limits."

I once lived in a place with my husband where you could walk to everything—the park, the drycleaner, the independent bookstore, the coffee shop, the outrageously priced supermarket—but the idea of raising kids there barely occurred to me. My neighbors were in a constant battle with the landlord. They wanted to leave their strollers in the hallway so they could eke a few more feet of living space out of their cramped apartments; the landlord said it was a fire-code violation. It was ridiculous enough lugging our drycleaning and groceries back and forth—who could imagine doing it with kids in tow? We had no car: parking one would have required spending hours of our lives each week to play musical vehicles, or paying hundreds of dollars a month to put it in a garage 11 blocks away. Our neighborhood was safe by New York standards, but kids on our street were never allowed to play by themselves in the park a half-block away. Instead, their parents—who paid $40,000 a year to rent a two-bedroom apartment (I shudder to think what it is like now, ten years later)—tied a milk-crate to the lamppost and allowed them to shoot baskets on the sidewalk out front. And don't even get me started on the public schools.

In other words, it seems clear to me that Michael Bloomberg was right when he said living in New York City was a "luxury good." It turns out, though, that I am in a minority in my view of the impracticality of urban life for people with kids. And the evidence is not merely in reality shows, or among the folks in my old neighborhood who liked bringing their newborns to hip bars to hang out. As Alan Ehrenhalt argues in his new book, The Great Inversion and the Future of the American City, "we are living in a moment in which the massive outward migration of the affluent that characterized the second half of the twentieth century is coming to an end. And we need to adjust our perceptions of cities, suburbs and urban mobility as a result."

In the 20th century, Ehrenhalt observes, "virtually every city in the country had a down-town, where the commercial life of the metropolis was conducted; it had a factory district just beyond; it had districts of working class apartment buildings just beyond that; it had residential suburbs for the wealthy and the upper middle class at the far end of the continuum …. People moved ahead in life by moving farther out." Ehrenhalt's evocative descriptions of the vibrancy of life in some European cities make one wonder how we even ended up with that arrangement. The boulevards of Paris designed by Baron Georges-Eugene Haussmann in the 1860s are a particularly fine example:

Haussmann was an artist of street furniture. The most trivial-seeming objects were designed with ingenuity and great care: Litter bins, sun and rain shelters, drinking fountains, public bathrooms, awnings, kiosks, pillars, and especially lampposts were decorated with silver or even small amounts of gold. The apartment buildings that lined the boulevards were highly desirable living spaces.

Observers at the time marveled at the tree-lined streets and the vibrant streetlife everywhere. One historian called it "an all-day circus and fair accessible to everyone." As Ehrenhalt observes, "Those lucky enough to live in flats about these sidewalks could watch the circus from second- or fifth-floor balconies—and they could be watched themselves by pedestrians looking up from below."

What relevance does any of this have for American cities? I couldn't help but think of a t-shirt that became the running joke of my hometown in Massachusetts. It read: "Worcester: Paris of the 80s." Still, it does seem as though there are modern American builders and architects who are paying attention to those desirable aspects of 19th-century city life. One builder in Phoenix who has had success putting up smaller apartments in the downtown area explains, "Life happens under five stories …. Everything above is just a place to pack people." These European cities certainly were not perfect places. The lower classes mostly lived in squalor outside the city limits, but more Americans today seem to want these vibrant multi-use neighborhoods. Ehrenhalt, now Information Director at the Pew Center on the States, makes a convincing case that most of us want to live and work and socialize in the same places. Psychologically, perhaps, there is much to be said for this. Happiness studies (all the rage these days) suggest that people think moving into a bigger house with nice appliances will make them happier, but, in fact, reducing commuting time is the only real estate choice that seems to affect personal satisfaction in the long term.

A New Yorker piece a few years ago by Nick Paumgarten described people who drive two or three hours each way to get to their workplace. Nor was it a temporary situation for most of them—dealing with a long commute while a spouse looked for a closer job, for example. As Paumgarten wrote: "Roughly one out of every six American workers commutes more than forty-five minutes, each way. People travel between counties the way they used to travel between neighborhoods. The number of commuters who travel ninety minutes or more each way—known to the Census Bureau as 'extreme commuters'—has reached 3.5 million, almost double the number in 1990." The people Paumgarten interviewed, though, were not wealthy. They were secretaries and workers in auto parts dealerships.

The lower classes now live further out. In fact, Ehrenhalt's "Great Inversion" goes a long way to explaining how our biggest immigration conflicts seem to be happening in places like Hazelton, Pennsylvania. Immigrants don't live on the Lower East Side anymore. Who can afford it? Instead we find that the suburbs of Atlanta have come to host one of the largest Hindu temples in the country.

The wealthier professionals have no desire, generally speaking, to spend a lot of time commuting. When they look for a home they want a fast way to work. They're even willing to use public transportation. Ehrenhalt describes the rise of an inner suburb of Chicago called Sheffield. In 1970, it was riddled with crime and run by gangs. Today, writes Ehrenhalt, "it is rich …. It is a neighborhood of stable and substantial affluence where scarcely any of the people we normally consider gentrifiers can afford to live." And Sheffield is only a 14-minute commute by train to downtown. Even people who don't use public transportation tend to see the presence of a train or subway station as a sign of the kind of urban area they'd like to live in.

Still, funky cafés and attractive housing stock and a train stop do not by themselves make a hip urban enclave. You also need jobs. You need a city with some kind of economic activity. And Ehrenhalt, who was editor of Governing magazine, is careful to show how politicians, not just urban planners and architects, can make an urban area rise or fall. Whether it's the burdensome public pension obligations of Philadelphia or the high taxes of Cleveland or the rampant crime of Detroit, the public policy issues are not going to go away by themselves. And young professionals are only willing to endure so much in order to live in one of these neighborhoods.

Ehrenhalt cites a number of studies showing that gentrification brings more benefits to neighborhoods than it takes away. But the Great Inversion is ultimately about much larger trends than just a few young professionals who want to find affordable urban housing. It's about major demographic shifts that will occur in this country over the next few decades. Baby boomers have become empty nesters and have started to downsize and move to more central locations. Meanwhile, only about a quarter of American households will have children by 2030, compared with about half in the 1950s. More Americans are simply remaining single. And fewer are predicted to become homeowners, particularly after this current mortgage crisis. Who knows? Maybe Cleveland is bound for a comeback.

Naomi Schaefer Riley is working on a book about interfaith marriage to be published by Oxford University Press.